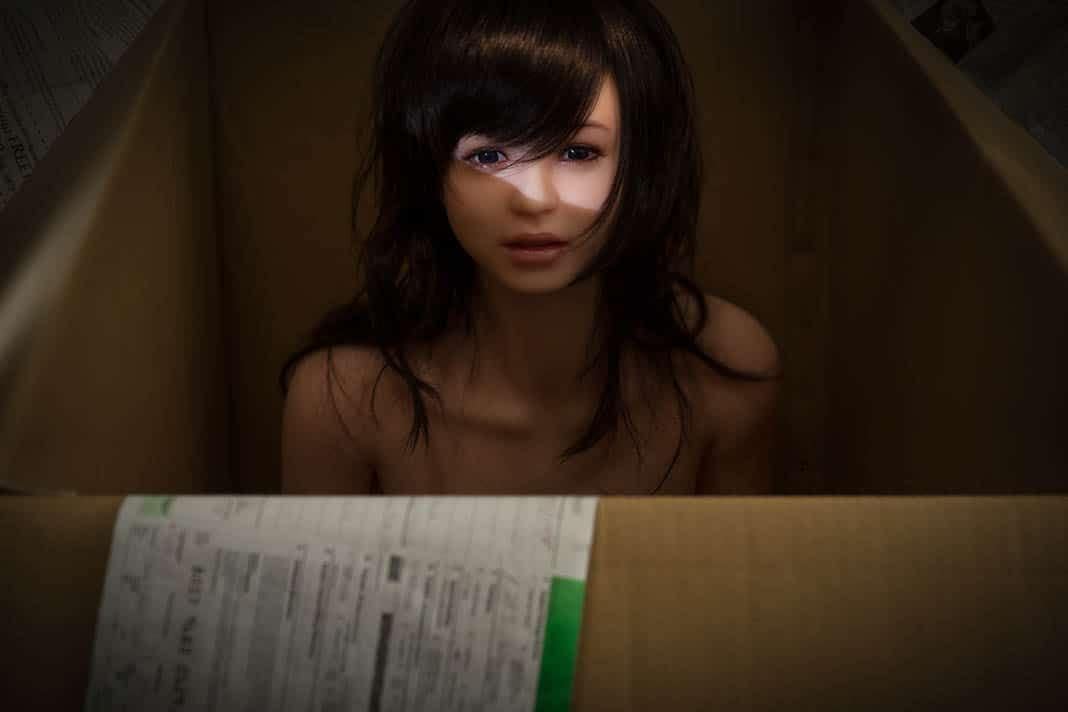 Still Lives: Eva
“This is not about a sex doll, but all about our solitary existence in human society.”

“So how much is it?”
“$10,000. She is expensive,” Brian, a representative of a silicon sex doll company in Japan, told me on the phone. “However, she’s not going to leave you behind or die. She’s going to stay there with you forever as she looks now.”

A month later, I received a giant box from a sweating FedEx deliveryman. I sat down in front of the box with a box cutter. My hands were trembling slightly as the cutter went along the taped line. I eventually opened the box. It was Monday afternoon, December 29, 2014, the very first day I met her.

I began photographing dolls in 2001 to listen to their voices, and see their secret lives once again as I did in my childhood. And after a few years of inviting them into a photographic world I staged, I started asking myself, “Why do I really photograph dolls?”

It was loneliness. I know what people want, how to make them happy, and how to enjoy moments. I talk, drink, and sing with many people all the time. However, I find myself home alone when I wake up in my bed. I always face emptiness when I come home from work or parties. I feel lonely in the crowd. I feel the loneliest in my biggest moments of happiness. This is because I now am afraid of what comes next. I believed in eternity when I was an innocent child. I had a faith that my family, friends, and love would go on forever and with me, as long as I did my best for them. However, people, moments, and memories I wanted to last forever have left, died, or disappeared, and I know the rest of them will do the same. Seeing them leave me does not get easier no matter how many times I experienced.

That loneliness is why I became interested in photographing dolls. I know human-like but inanimate objects are not going anywhere. But then I questioned myself again. “What if I create an artificial eternity? What if I give a doll a new birth with a new identity? What if I make the one stay with me forever in the fantasy world I construct?”

For the project titled “Still Lives: Eva”—named after two words, “forever” and “Eve,” who were the first woman according to the creation myths of the Abrahamic religions—Eva and I have an uncanny relationship that began the day she came of out a box. We sleep and wake up together. We go shopping, dining, driving, and even travel together just like ordinary people do in their real lives. We laugh and cry, we feel happy and lonely. In this artificial eternity I constructed, I hope my work will serve as a catalyst that stimulates to leave questions of our solitary existence in human society. June Korea, is a New York–based visual artist who uses photography as a bridge to invite viewers to his constructed fantasies. His aim is to visually translate his imagined narrative into the real world. His hope for his work is that it will serve as a catalyst that stimulates to leave questions of our solitary existence in human society.