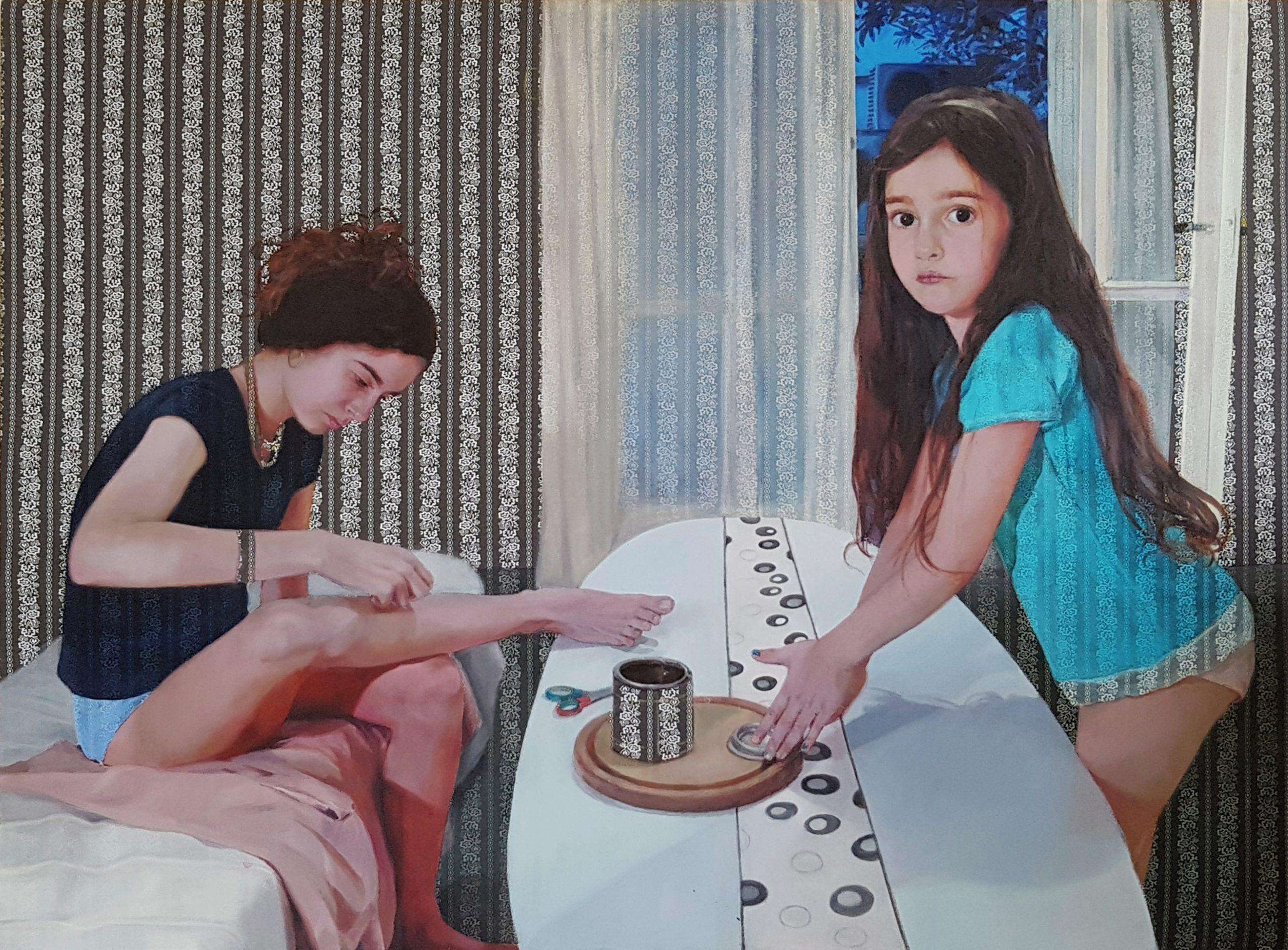 Oil & Acrylic on Fabric, 110*90 c"m.
The painting is part of a new series in which I examine close family relationships. I photographed my family in the most intimate moments and Then I paint it.
In this painting, the eldest sister (llly) uses wax for hair removal, An act adolescent girls begin to do. Next to her is the little sister who is curious about the event. I caught a moment when the little sister looked at the camera with a surprised look and at the same time a penetrating gaze. She seems awake, curious and thirsty for life. I drew the photograph on textile fabric, with examples similar to wallpaper, Because I wanted to get an intimate atmosphere of a domestic space. It was important to me to create a confrontation between the interior and exterior, between the protected living room space and the window behind "Zohar" with the background of the dark night outside, Which can hint at the difference between childhood and adolescence 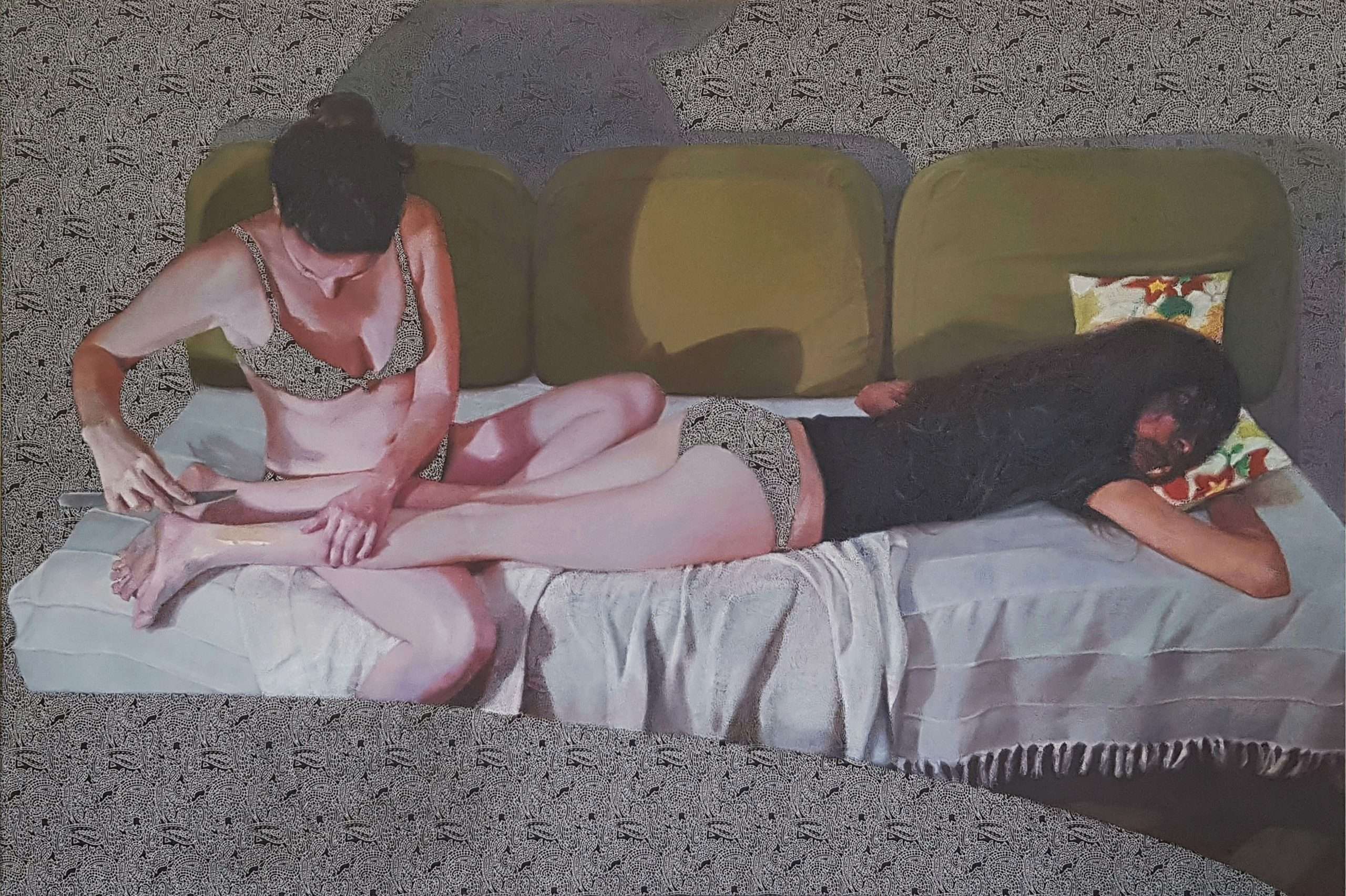 The Mother Spirit is watching 2018

Oil on Fabric, 120*90 c"m
The painting is part of a series in which I introduced myself for the first time as a model. The situation is of a close relationship with my daughter who is a teenager. The painting deals with intimacy and exposure. The composition reminded me of Gauguin's painting from 1892 "The Spirit of the Dead Keep Watch" (a painter I was very much influenced by When I was a teenager) In the painting Gugain manages to draw a moment of fear, because his young wife was afraid of spirits. In my painting, I also wanted to disturb the feeling of peace with the darkness of the shadow over the mother and with the drawing of the knife in her hand. When I paint on canvas that is not a regular canvas with a layer of grund, I have to deal with the surface's decorativeness and how the color will absorb on it. I chose most of the time to work with transparent layers of color, so that the pattern on the fabric would mix with the body of the characters. 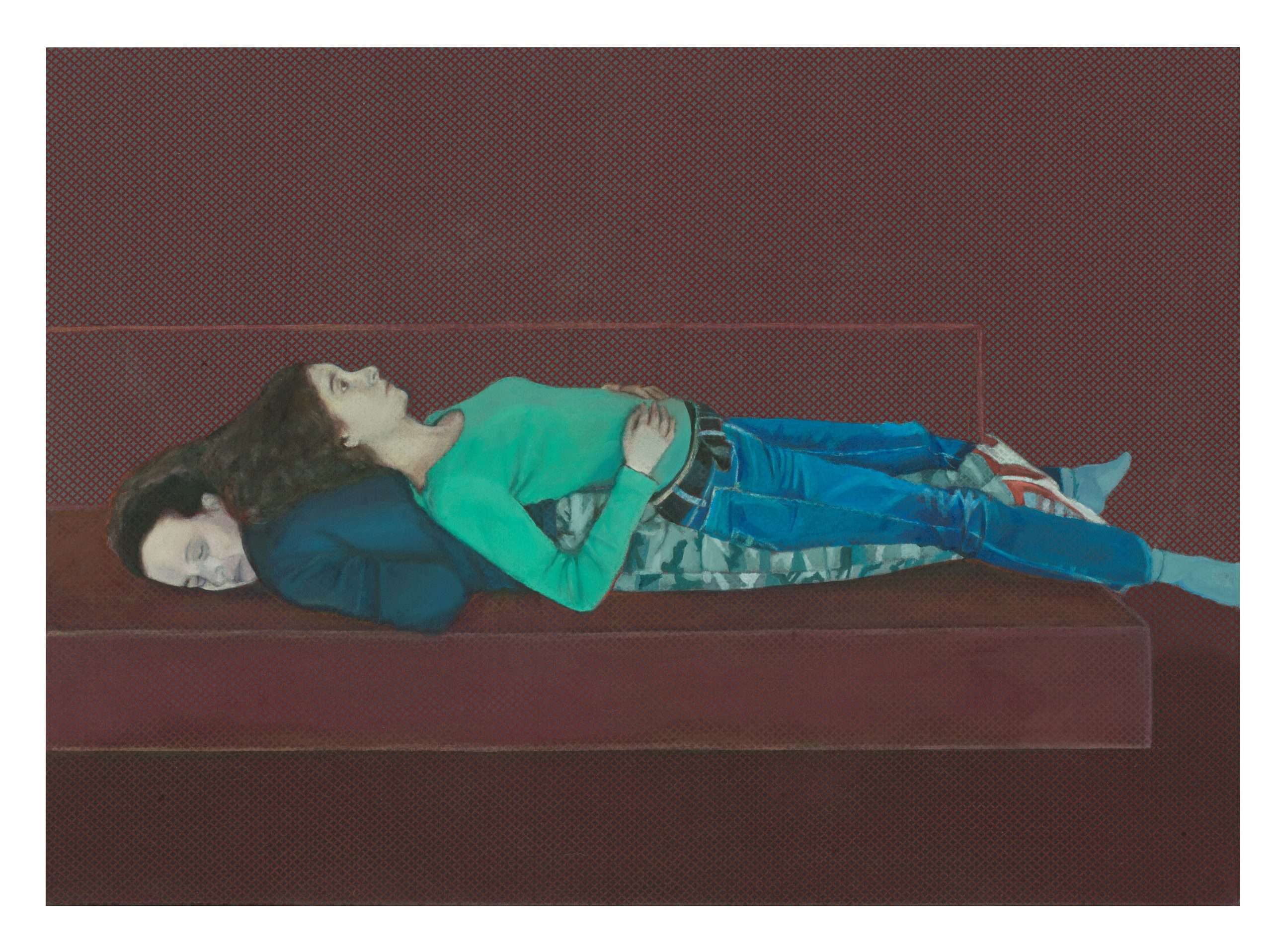 In the painting my eldest daughter is lying on my back with her face facing up, our bodies as if connected to each other in many parts of the body.
The situation is of a close relationship with my daughter who is a teenage girl. The painting deals with intimacy and exposure,
Role swapping and separation.
As in the mythological story of "Demeter and Persephone", the mother and daughter experience the difficulty of separating from each other.
The close relationship between mother and daughter
Contributes to the blurring of the ego boundaries of both the mother and the daughter.
This blurring makes it difficult for girls and mothers in the processes of separation and individuation.
The daughter develops a deep fear that she will be like her mother, and she also develops fears that she will be different from her mother.
These fears mark the deep conflict within which mothers and daughters grow, the conflict between autonomy and separation

Adva studied is a graduate at Kalisher Art College in Tel Aviv. She won twice the Excellence Scholarship at this College, participated in a residential scholarship at the Cergy-Pontoise Academy of Art (Paris) and the painting "Chris and Sarit" was bought for the Dafen Museum's collection(China).
Her painting is a figurative, She work in a number of techniques on different surfaces, Influenced by the photographs she take.
The inspiration is mainly related to images from my immediate surroundings: family, friends, acquaintances…She is interested in examining the concept of family, parenthood, relationship, role-playing between parents and children, women and men.
She is very fond of the short stories of Chekhov and try to describe the characters moods like him through tiny soul vibrations, momentary sensations. The space she created is a closed environment in which the characters are in a world of their own regardless of the passing time.