SAPE transcendence from father to son, Vanitas project, 80 x 130 cm, 2020 digitalprint on allum.
A photo taken at the cemetery on February 10th, 2020; where a father initiates his son on the day of the commemoration of the 26th year of the death of Adrien Mombele, nicknamed “Strevos Niarcos, refferent to the Greek Miliary of the 50s to 70s.
la sape (society of elegant people), being a movement of Congolese dandy, it is considered as a Religion, the “kintedi religion” of which Adrien Mombele, known as Niakos, was the pope of sape. 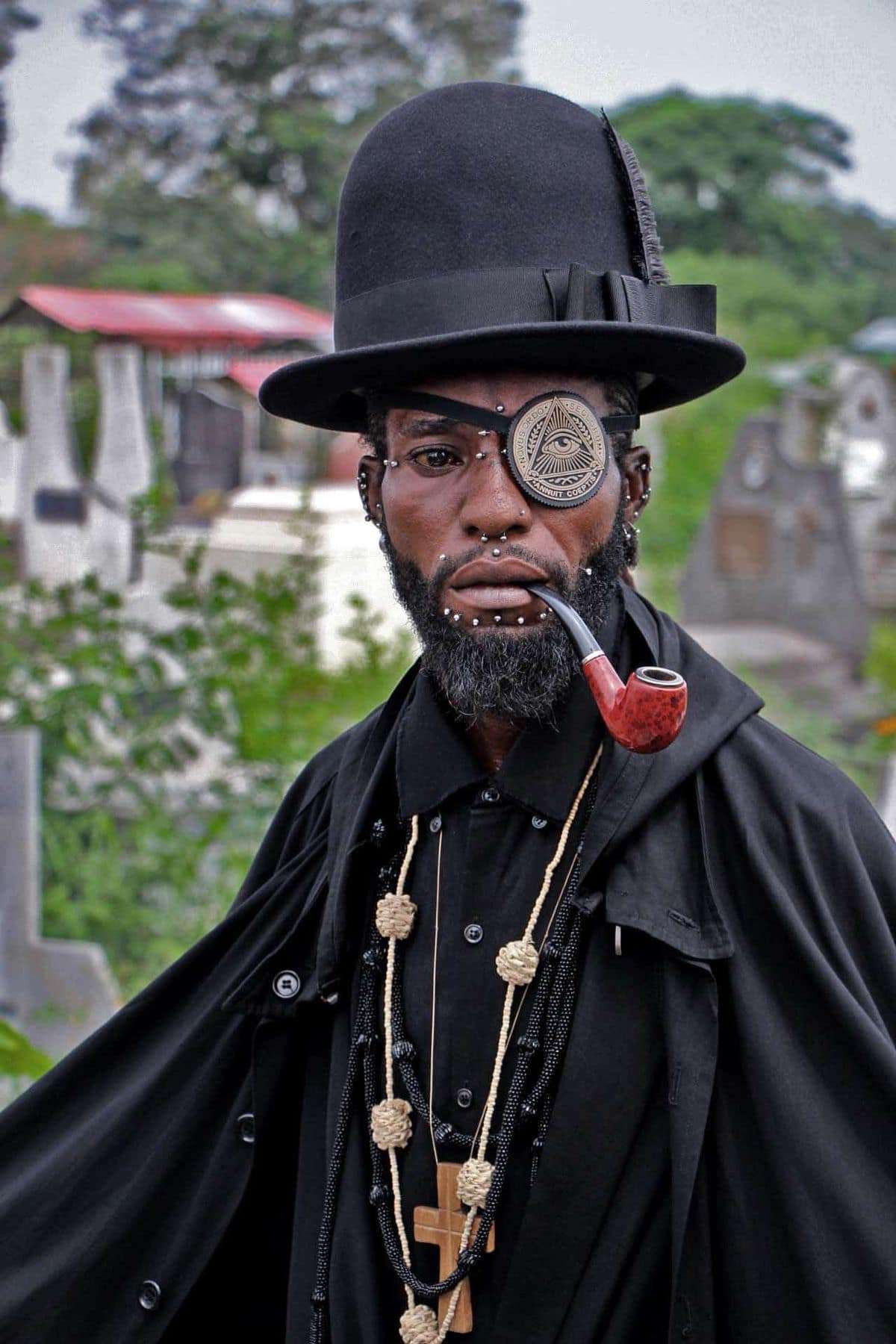 The Spiritual in Vanitas 2018

the spiritual, Vanitas project, 2018, 80 x 120 cm.
Photos taken at the Gombe Cemetery in Kinshasa of Sisi Manto, sapeur performer; these performative gestures are always linked to religious signs and symbols whose subliminal messages in this performance speak of the devotion of the art of dress to spirituality.

a 10-minute documentary on an Enigma artistic project through the meeting between Yves SAMBU and ba koko.
Yves Sambu realize with the Bakoko (designer), a pictorial project with the vegetal beads which the ba koko uses as material to realize their clothing design. Yves Sambu, is experimenting with the materialization of images virtually pixelated into images materially pixelated by these vegetal beads.
Hence, to try it out, Yves has commissioned by his model, the iconic image of prophet Simon Kimbangu, Prophet of Black in the Congo.
Ba Koko, literally means: the ancestors, in these contexts, is the wisdom or knowledge of the ancestors.
ba koko is a group of artists who work on the traditional design of vegetable beads, they are also considered an artistic and spiritual movement that claims the identity of blacks, especially the return of the Kongo kingdom

Congo, Democratic Republic of the

Yves Sambu’s «Vanitas» project is a series comprising of photographs and videos that takes as its subject « La Sape » and Congolese « sapeurs » (dandies). Sambu’s portrait-subjects are depicted in cemeteries, bars, streets, and in private shops and work-places. At the onset of « Vanitas » project, Yves Sambu wanted the exhibition to be structured around several elements. The dimensions that form « Vanitas » are multiple: from the sacred to the playful, from the festive
to “socio-poetic” commitment, from competitive rivalry to artistic expression to self-esteem.
In Sambu’s «Vanitas » project the pictures of the Sapeurs posing in various cemeteries immerses us in a utopian universe of being and appearing, a universe where narcissism (the extreme love of self) and the respect of the other (being alive or dead) coincide. «Vanitas» shows us the spiritual and human dimension of « La Sape » movement, where collectivism and individualism merge, and where the very meanings of tradition .