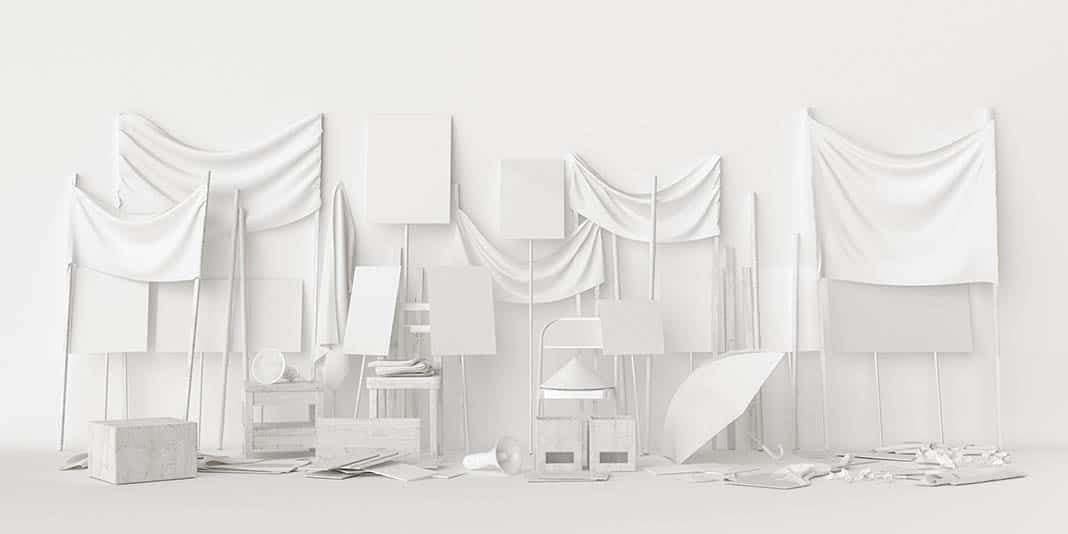 Digital Print on Neon Box. 200 x 100 cm. This is a work of a presupposition of the condition of ‘the end of time’, as well as Yaya’s personal reflection on her art practice for the past 5 years. Yaya’s search of her identity as an Indonesian-Chinese reminded her of the events occuring during the May 1998 riots of Indonesia, which introduced her to the “Kamisan” rally as a forum for all survivors of human right cases in Indonesia. This work focuses on the tools that are used as a leading role in demonstrations, protest, and marchings in the past.

Photography on Canvas, Hand-stitched with Gold-colored Threads. 60 x 120 cm. ‘The Victory Road’ which presents a Chinese community in Glodok, Jakarta is an entry point to help Yaya understand the social and political history of this nation, particularly the Indonesian Chinese. Yaya has begun with the May 1998 riot as the starting point to talk about how Chinese people understand their past, beyond the tragedy. In this work we are presented with five portraits of people living in the Victory Road area. The subjects of these portraits were those who are victims of the 1998 riot. Yaya walks through these memories with her subjects, some memories are vivid, some are fuzzy, all in an attempt to found out their history as victims of 1998 riot. In these images the artist has eliminated their face, hands and legs; and replaced them with gold colored thread. This act of stitching illustrates how identity is built by the complex processes of memory, history and the present reality.

This work is part of Project 57, a project that Yaya’s journey in retracing and unveiling this revolutionary women’s magazine that was first published in June of 1959. The retracing art includes the background, the purpose, the people behind the magazine, and what traces are left of it now. The project tries to bring those findings in celebratory tone. A celebration for the accomplishments of these national heroes whose names are yet to be written into our impeccable history. The photography above are taken from the first edition of the magazine, a picture of a woman holding a baby while putting her voice on a ballot box as a message for Indonesian women to actively join and contribute to the political arena.

Yaya Sung is an interdisciplinary artist, born in Jakarta - Indonesia. She engages in contemporary art scenes since 2006. Art becomes her platform to talk and raise social and political issues in Indonesia. Vocal point of her previous work: Questioning her identity as part of minorities than went through racial discrimination during the 32 years dictatorship regime, Examining Kamisan Acts (a silent protest held every Thursday outside presidential palace in Jakarta), and Destruction of women’s movement in 1965. Her media varies from photography, videography, performance, to text and design installation. She is keen to experiment with limits and boundaries of being an artist. Yaya is determined to use fear and trauma as the first door to understand the meaning of her existence.