The City
BY C. P. CAVAFY
TRANSLATED BY EDMUND KEELEY

You said: “I’ll go to another country, go to another shore,
find another city better than this one.
Whatever I try to do is fated to turn out wrong
and my heart lies buried like something dead.
How long can I let my mind moulder in this place?
Wherever I turn, wherever I look,
I see the black ruins of my life, here,
where I’ve spent so many years, wasted them, destroyed them totally.”

You won’t find a new country, won’t find another shore.
This city will always pursue you.
You’ll walk the same streets, grow old
in the same neighborhoods, turn gray in these same houses.
You’ll always end up in this city. Don’t hope for things elsewhere:
there’s no ship for you, there’s no road.
Now that you’ve wasted your life here, in this small corner,
you’ve destroyed it everywhere in the world. 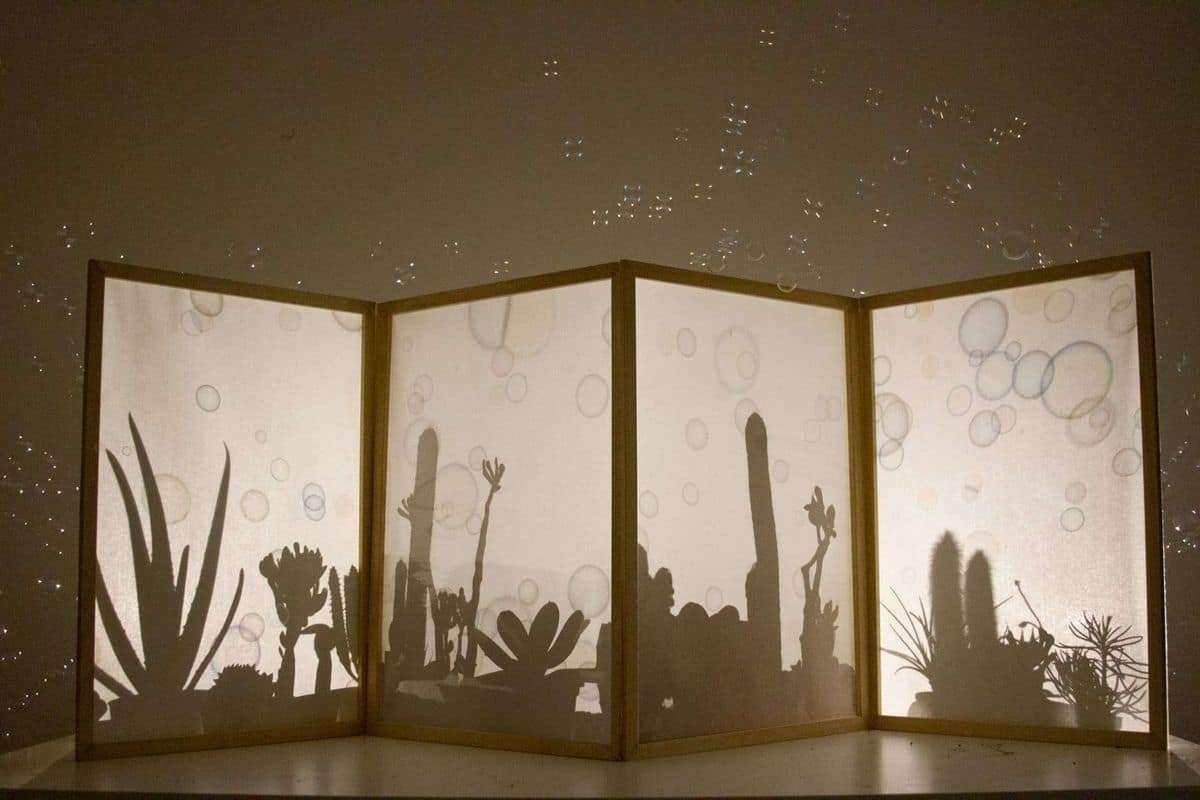 Secret Area
The work “Secret Area” is a traditional Chinese garden consisting of a screen and plants originating in Europe and America, instead of China, and soap bubbles. Classical Chinese gardens are part of traditional architecture, in which the various combinations of plants carry different meanings and the positional relationship between the windows and garden plants also bring a different sense of aesthetics. The screen is a typical interior design of traditional Chinese architecture that is used to cover the wind or divide the space, and for this reason it is very similar to the window of the external garden: both have the function of obscuring, of not showing directly .
In China there is an expression, translated literally as “window rice paper”, which expresses the meaning of secret known to all but which is never intentionally declared: in ancient times it was said that anyone who wanted to discover what he hid behind the rice paper placed on a window he could easily pierce

“Lao Tan” is the nickname I gave my father: the literal translation is “Old Tan”, which is a Chinese way of calling old friends. Our family lives in the northeastern part of China, where winter is very cold, and the taste of local cuisine is very intense. Lao Tan is a person with this typical northeastern taste; he likes to cook very ordinary but very delicious dishes, which therefore represents the taste of the house.
Lao Tan’s sense of taste will begin to degenerate when he gradually becomes old and his kitchen becomes gradually more and more salty. This change in taste, i.e. the increase in the quantity of salt, is a testament to the change and growth derived from the relationship between Lao Tan and me, it is the symbol of the silent bond between us. Salt influenced me unconsciously, it is that element that reminds me of my origin. In this way, when I am in a foreign country, it is as if the “breath of smoke from the house” far away always accompanied me

Tan Xuran was born in Changchun, China, in 1992 and graduated in literature from the University of Jilin, specializing in painting at the Northeast Normal University of Changchun, specializing in new artistic language at the Academy of Fine Arts in Florence. The young artist offers a wide range of works that fade and range from a personal multimedia research, spokesman for Chinese anecdotes and folkloristic traditions, to installations and video art up to a use of painting characterized by the theme of form. Fascinated by artists such as Fabio Viale, Plastique Fantastique, Berlin de Bruykere and Daku, she wishes to operate eclectically in the world of contemporary art.