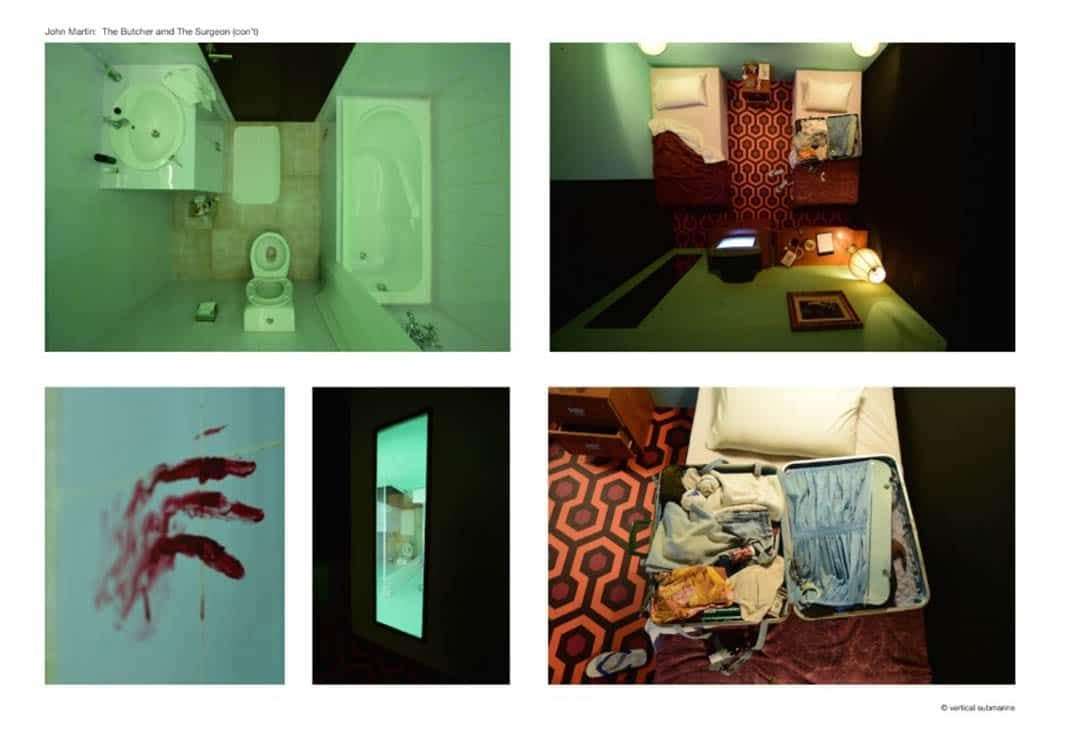 vertical submarine takes as the point of departure, the site of the murder as the setting of this installation. It takes the form of a hotel room
where a murder could take place. While taking the initial story as an impetus for the project, the collective deliberately resists any attempts
to faithfully recreate the scene of the crime as though it were a documentary. The focus is rather, on the reading of the work as a plausible
set in which the event could take place. The installation will take on more than one temporal setting. Viewers first enter a room which
resembles the set of a hotel room. Through gaps within the set, they get a different view of the hotel room that they are in.
As with vertical submarine’s previous installations, parts of the room will be cropped off as in a photograph. However, in this project, the
cropping off of furniture works within the context of other parts that have been dismembered and parts of the story that the audience has
no access to. The installation will also deal with texts, in particular, the handwritten note by Martin to his mother, the sentence pronounced
by the judge and a third text from The Investigation by Juan José Saer.
The installation presents these texts as a dialogue with each other. While Martin was a British citizen, he was semi-illiterate and while he
was being accused of murder, his note is one of love and peace even if it is beyond him. As a counterpoint, the judge’s sentence begins
with a tone of satisfaction. It is not the intention of the project to portray Martin as innocent of the crimes but to highlight the way language
is used by these different positions. This work is part of the Domestic Violence series whereby different day
to day objects are gathered to produce an uncanny experience. This
is an assemblage of an old chair and used choppers collected from
chefs and food hawkers inspired by an old news report of a jealous
chef in Singapore who murdered his wife for adultery, and chopping
her into pieces. Just as how home-made bombs are made from easily
available industrial and household, objects and consumer products
surrounding us are actually weapons and time bombs waiting to
explode.

vertical submarine (VS) is an art collective from Singapore. The group has received accolades such as The President's Young Talents Award ( Singapore/ 2009), The Celeste Prize (New York/ 2011), and Finalist for Sovereign Asian Art Prize (Hong Kong/ 2015). In 2010, VS was appointed the Associate Director of TheatreWorks (Singapore/ 2010-13), and part of the Associate Artist Research Programme at The Substation (Singapore, 2011 -13). They have participated in projects such as Kuandu Biennale (2010), Roundtable: Gwangju Biennale (2012) and The Roving Eye: Contemporary Art from SE Asia, ARTER (Istanbul/ 2014 and CCC: Jogjakarta organized by Bangkok Arts and Cultural Centre (2016). To date, their widely acclaimed art installations, which includes The Garden of Forking Paths/ Mirror Room (2010