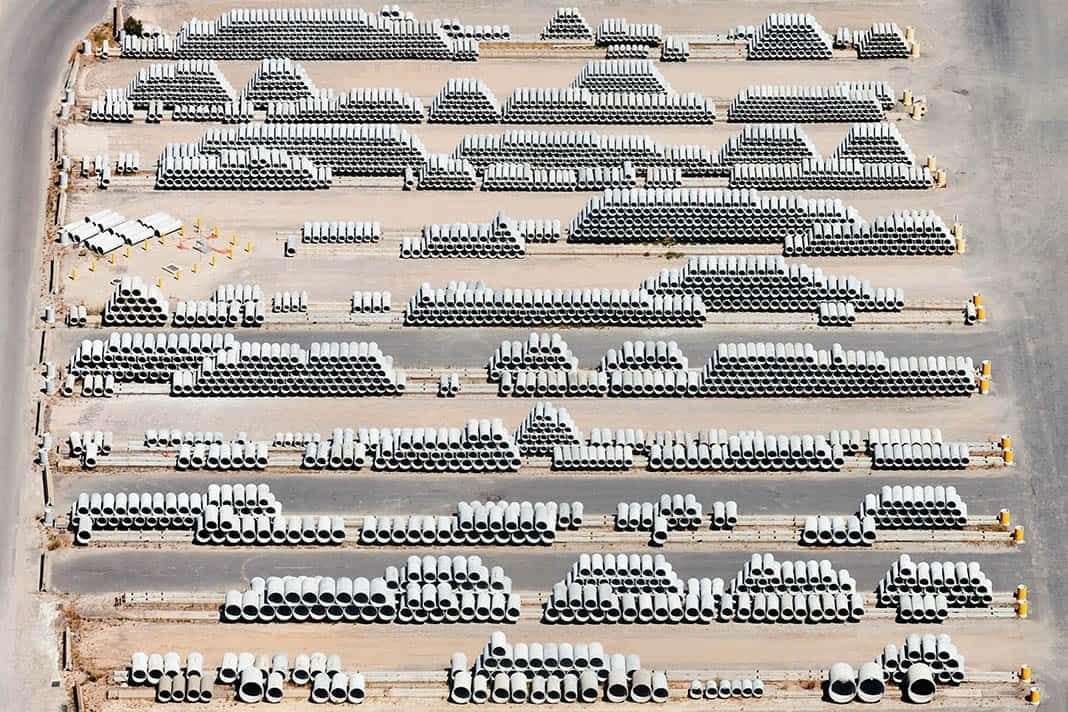 Construct is a series of detailed aerial landscape photography above the suburbs of Melbourne, Australia industrial environment.

As I looked down from above, I began to focus on the repetition, patterns, form, structure and organisation of different industries. From the air, there is always something to see, learn and understand. I’ve always been interested in what creates employment opportunities, particularly in the building, shipping and automotive industries.

With automation technologies becoming more prevalent in certain areas of logistic based operations, I wanted to take an elevated screenshot of what our landscape looks before it begins to change again.

I was interested in the space that big business & corporations occupy and how they use it for their and our own perpetual good, or evil.

Through this series I want the viewer to reconnect with the demand on our planet and the human effort behind our every desire.

Manuscript – To the untrained eye, these tubes have been stacked like any other stockyard. However, it is more likely to be partially managed by a computer system and it’s dedicated software. Throughout any given working week these tubes can be relocated internally and externally from the yard using tags that refer to purchase orders and other various information. From above, the design of this autonomy is similar to sheet music, a silent yet consistent method, making business more efficient. Cabby – In the last 5 years or so the transport industry has seen a huge amount of change. With ride-sharing apps such as Uber & Lyft becoming more widely accepted, there has been just as much development in driverless technology.

Cab drivers know their game better than anyone else. There is only one thing they don’t know, and that’s where they’re going. To critics, these developing technologies in ride-sharing apps and self-driving cars have seemed so far out of reach for so long, however, every day they draw closer and closer to reality. How much longer will driving be a job?

If driverless cars are already among us, is there any reason to fight it? Truck and taxi services take up the majority of jobs worldwide, yet they’re some of the most vulnerable positions in this evolving industry.

Cab drivers and their ride-sharing counterparts have been at war for some time now, although working together might actually be the easiest solution possible.

Transit – From above you can’t grasp the full impact on what’s going on right in front of you. Directly after the previous image was taken, I was presented with a full storage yard for what seem to be dirty vehicles. Even though they’re mostly white, it makes me wonder how many of these cars haven’t been purchased yet, and will only be painted once the customer chooses their favourite colour when they order it online.

This type of automation made me realise how products can be developed to a more tailor-made standard. Let’s face it, you’re not going to buy something you don’t want. A human trait and desire is that we want more, more food & drink, more money, more holidays, the list goes on. Methods and process are formed and then put into practice that have proven to work, sell products and meet sales goals.

The truth is that the current effect on the earth is what enter the atmosphere in the late 70’s & the early 80’s. There is so much for us to see from the 80s, 90s, 2000s, 10s and now that we are on the brink of the 20s, it’s quite scary how the world will look by the time you finish reading this sentence.

Tim is a 28-year-old award winning Photographer originally from Melbourne, Australia. Tim has a unique perspective which stems from an early obsession with creative arts during childhood. Tim uses this passion to explore a variety of mediums and environments, combining his talent for storytelling and his photography to discover his personal photographic journey. With his ethereal vision he seeks to disclose the strong aesthetics of the world and it's compelling narrative that it continues to communicate. He uses this to continually engage and push boundaries with his progressive audience.