My inspiration for the mural comes from the 5 Points in NYC–the theme chosen by the LinkedIn design team. Because nature and the environment inspire my artwork, I decided to focus on the shapes of the physical layout of the collect ponds and land cutouts from historical maps of the Five Points, balancing those elements and my colors against the colors that the design team planned for the café. I wanted to create a work that had a feeling of wind and movement, balance and connections, and a diversity of colors and shapes. The mural begins high for visibility throughout the area and continues over doors and across the corner. LinkedIn is a company that creates points, connections, intersections, and movement in careers, lives, information, and across cultures and borders. I wanted the mural to reflect this formally in the points, connections, natural flow, and counterbalance in the artwork. 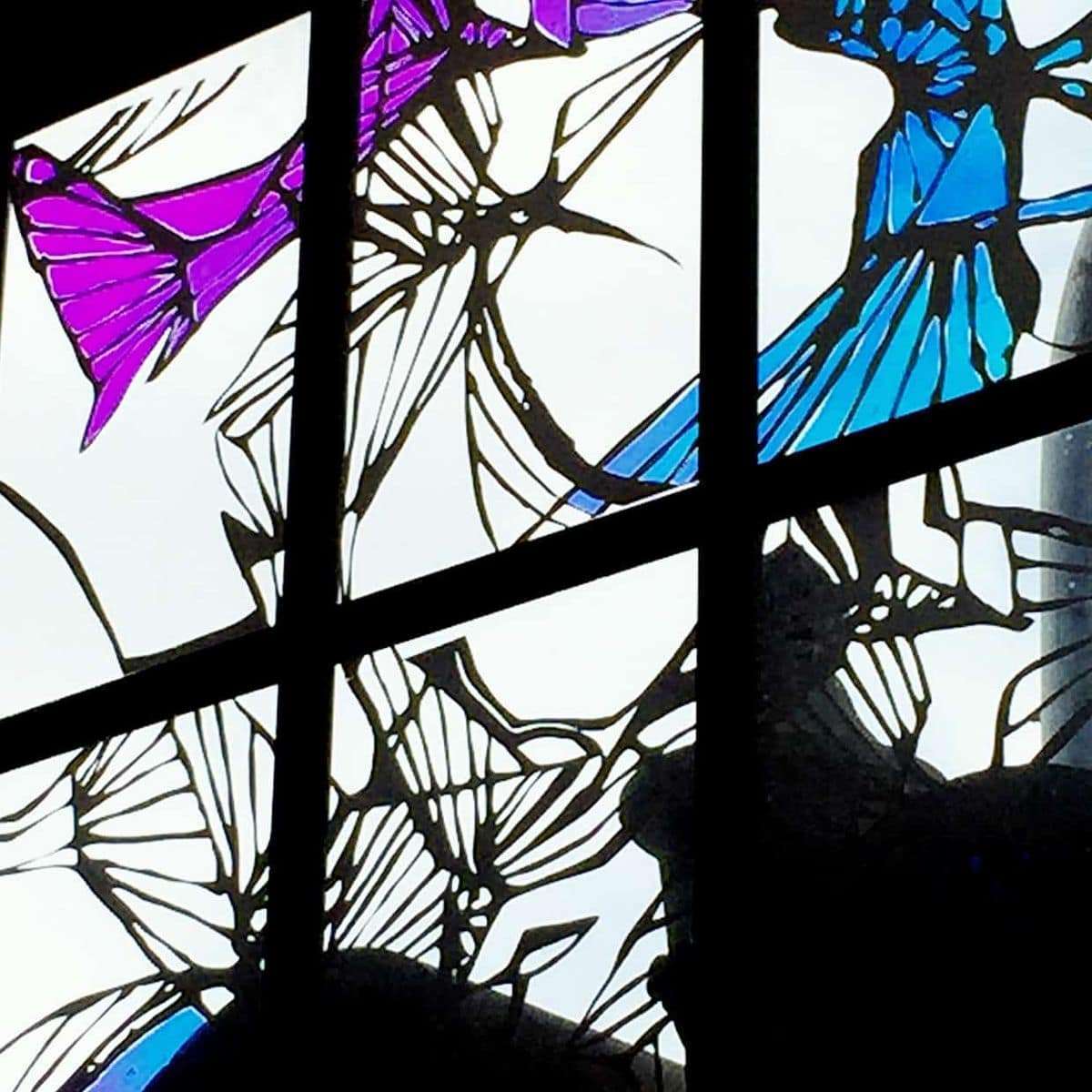 Human activity has destroyed habitats, spread invasive species, disease, and progressed global warming. These changes are weakening our ecosystems. The loss of keystone species can erode plant and animal ecology and set off a chain reaction affecting countless other species.

In HalfNature, I created a colorful landscape in faded colors to address the dangers of climate change. Yet the work is hopeful, so with direct sunlight, the window installation comes alive: the muted greens, yellows, and grays turn bright, and the blue glows in the light. Wild pinks, blues, and greens splash across the walls, floors, and even the sidewalk outside the building. The work is in celebration of the interconnectedness of all living things as well as the losses at stake if we don’t take the steps necessary to protect and maintain our biodiversity. 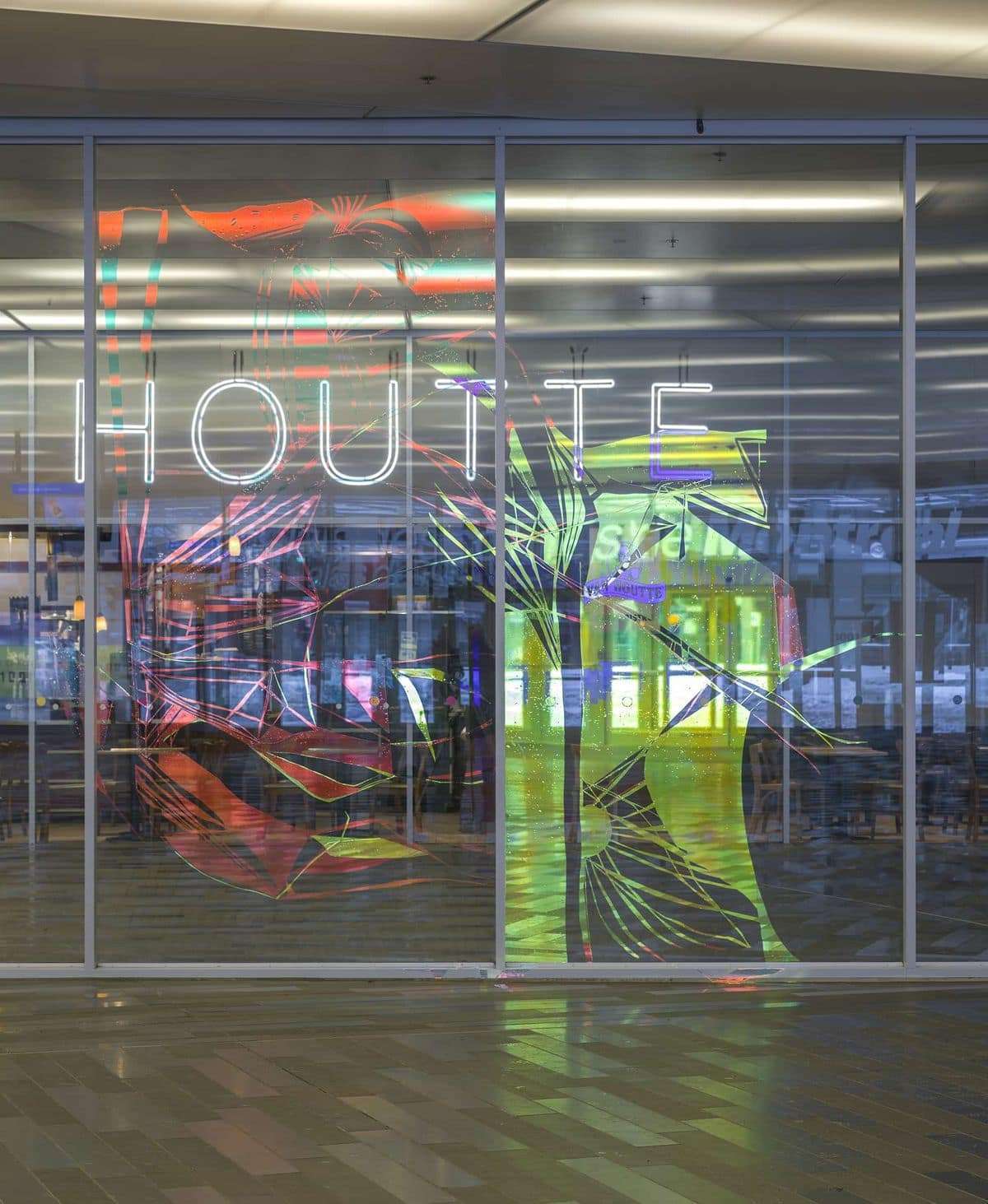 My inspiration in Collision (Montreal) was bird-window collisions and their threat to the environment. 600 million birds die each year across North America due to collisions with windows. Because birds do not have depth perception, they do not see the window in front of them. Reflections of trees only complicate the lack of depth perception–birds view the mirroring as a tree to land in or open sky to fly through. The design for the windows involves birds in flight abstractly. The focus is on color and reflections. I used dichroic vinyl that has color-shifting and reflective properties—it is based on the scales of the blue morpho butterfly’s wing. The images on the windows appear and disappear, glow and recede depending on the time of day, angle, and light. I took a similar approach as HalfNature, using a vinyl substrate that I hand-cut. I applied the work to 2, 18 FT high windows dividing the space between the escalator to the metro and the Palais Congrés.

Born in Chicago, Susan Rowe Harrison currently lives and works in New York. She holds graduate and undergraduate degrees from New York University and UC Berkeley, respectively, and studied painting and drawing at the School of the Art Institute in Chicago. She has exhibited her work internationally. Her public commissions include LinkedIn, Hyatt Hotels, Pfizer, Arts Etobicoke/Amnesty International, Autoshare/Art on the Move, Floorworks/Relative Space, Bookhou, The Gladstone Hotel, Wave Hill, ArtsWestchester, the University of Chicago Committee on Japanese Studies, and FIFA World Cup/Seoul 2002.