FELINA 2021 LYCRA RESIN 153X45X60 CM.
lately we have seen the new conquest of man on the planet Mars, in honor of this great event I was inspired to make this futuristic sculpture. From the name of Felina, resin Lycra sculpture, with a tablet connection, with the camera always active, so that the observer sees himself projected and can make a comparison with the present, thinking and revisiting the customs and culture of a bygone era, in a time of high technology, of innovation where we are conquering other planets, I think it is right to keep the origins, while in contrast to how we were and how we became, the customs of different ethnic groups, the culture of a past in empathy with technology, in symbiosis with information technology, the future that is now increasingly present in our lives. 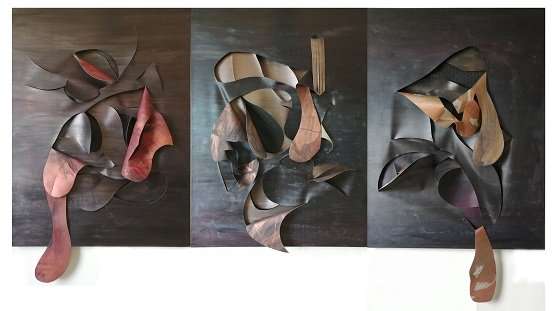 ALIA 2021 ACRYLIC ON CANVAS 120X300X8 CM.
I think that any visual work, regardless of whether it is pictorial or sculptural, can have the same intensity and always excite us in a different way, I would like to demonstrate that simply using the cut and overlapping of the canvas can demonstrate that art goes beyond appearance is the surface, which can go beyond the Canonical measures of a canvas, of a painting, but with the cuts and shadows I can go beyond the appearance, is able to understand that art has no limit and has no boundaries. Art is in each of us every person sees his own dimension, in taste, aesthetics and imagination, regardless of age, culture. each of us is a small artist. in front of this work of mine, any person can see a world of their own, beyond the classical surface, I have shown that I can intervene within the work, within and beyond the work. Creating a wall sculpture, but three-dimensional. PASQUAS 13+20 2020 OIL charcoal CANVAS 180X150X4 CM.
The work was done in just 2 working days. I started painting it on the morning of Easter April 12th. The next day, on Easter Monday of the Angel of the 13th, looking more closely at the painting, I realized that the face in the silhouette, unbeknownst to me, represented the face of Christ, exactly the same as the image of the Shroud, without having created and modified the image, considering that the entire work was created with a single brush 5 cm wide, the face of Christ is 15 cm high, 8 cm wide, even if I wanted to I would have been able to create it, impossible to compose it in detail in a space so limited. Swollen eye, aquiline nose, swollen lips, beard, a sleeping man, image perfectly identical to the face of Christ on the Shroud, and that's why I called it Easter S 13 + 20. The S represents the Holy Shroud, adding the day and the year forms 33 years, the same age as Christ.