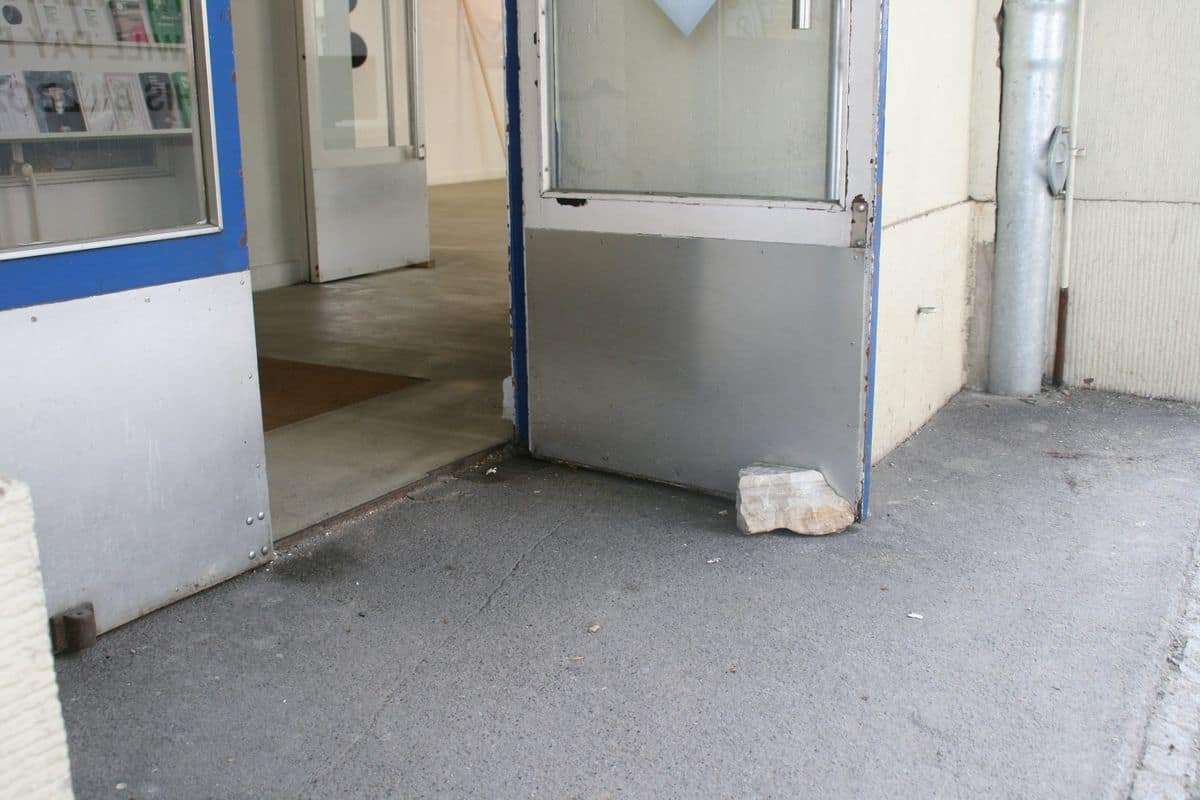 As the favorite medium for Greek and Roman sculptors and architects from the BC era, marble has become a symbol for the cradle of Western culture, its thinking tradition and today stands for a representative refined taste. Through recent political events that climaxed in public space in big demonstrations in Athens, marble also received a new connotation: knocked off from the pavements and storefronts and turned into stone chunks it is used as a protest “tool” to show people’s discontent.
In both playful and subversive way, the placement of the stone is symbolically circumventing the structural order present in today’s (European) bureaucratic system – debating an alternative approach in solution finding. Using the marble piece as a doorstop, does not only literally keep the entrance door open but it also keeps an institution open – as to have one foot in the door. Hereby the transformation of an object is a transformation of context: a translation as cultural transition. 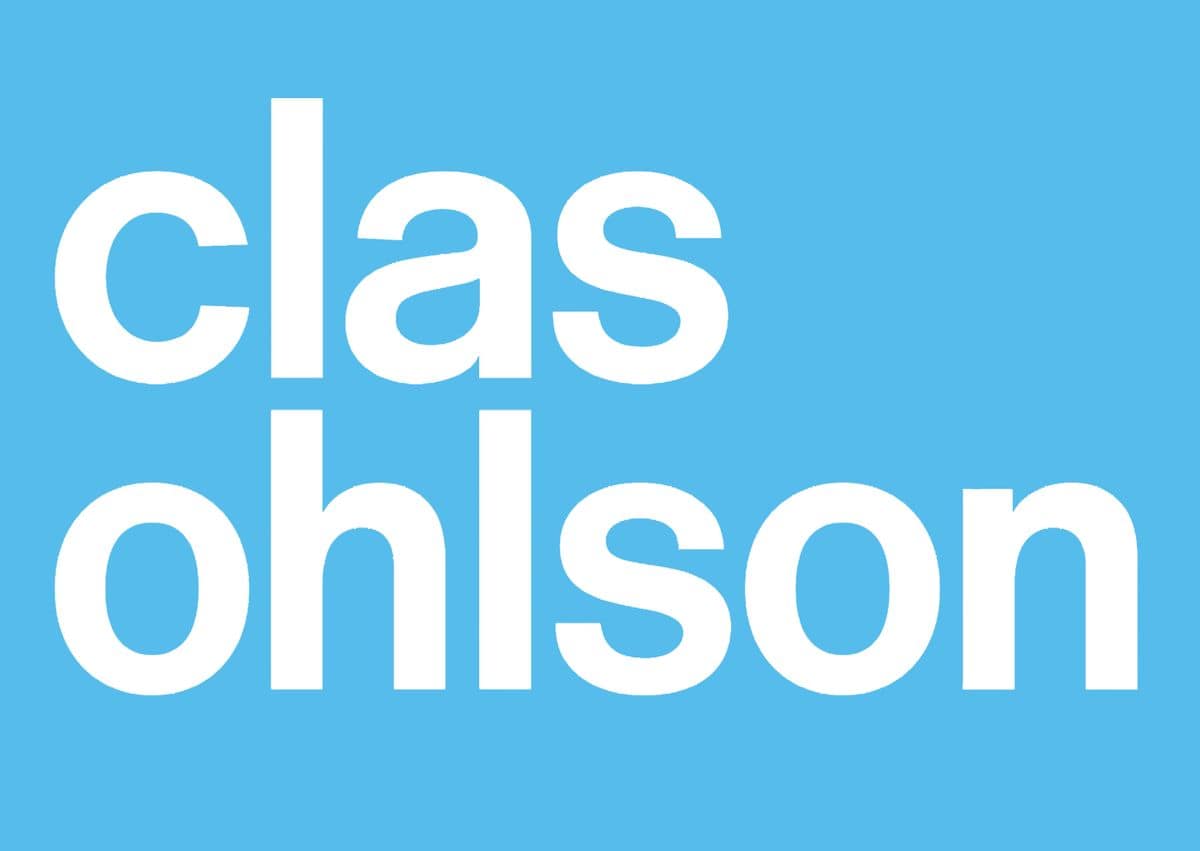 The artist exchanges the shop window display of one international retail company for another – a display from the same company, but from a different store. In fact, little or nothing changes: the usual products suitable for the current season can still be seen in the shop window. Whether the artist has really exchanged the already interchangeable window display or not – there is no evidence. The border between lie and truth is strained, the border between original and fake is blurred. In purely visual terms, this work only offers a a flat experience – a showcase like that of any other globally operating company. Conceptually, however, worlds open up: In an almost outrageous action, he puts his finger deep into the wounds of our current constitution. It deals with the interchangeability of today’s globalized and consumer-oriented world of goods. It illustrates the fragility of truth in a society driven by claims. (Part of Altonale Art Festival, Hamburg 2018) 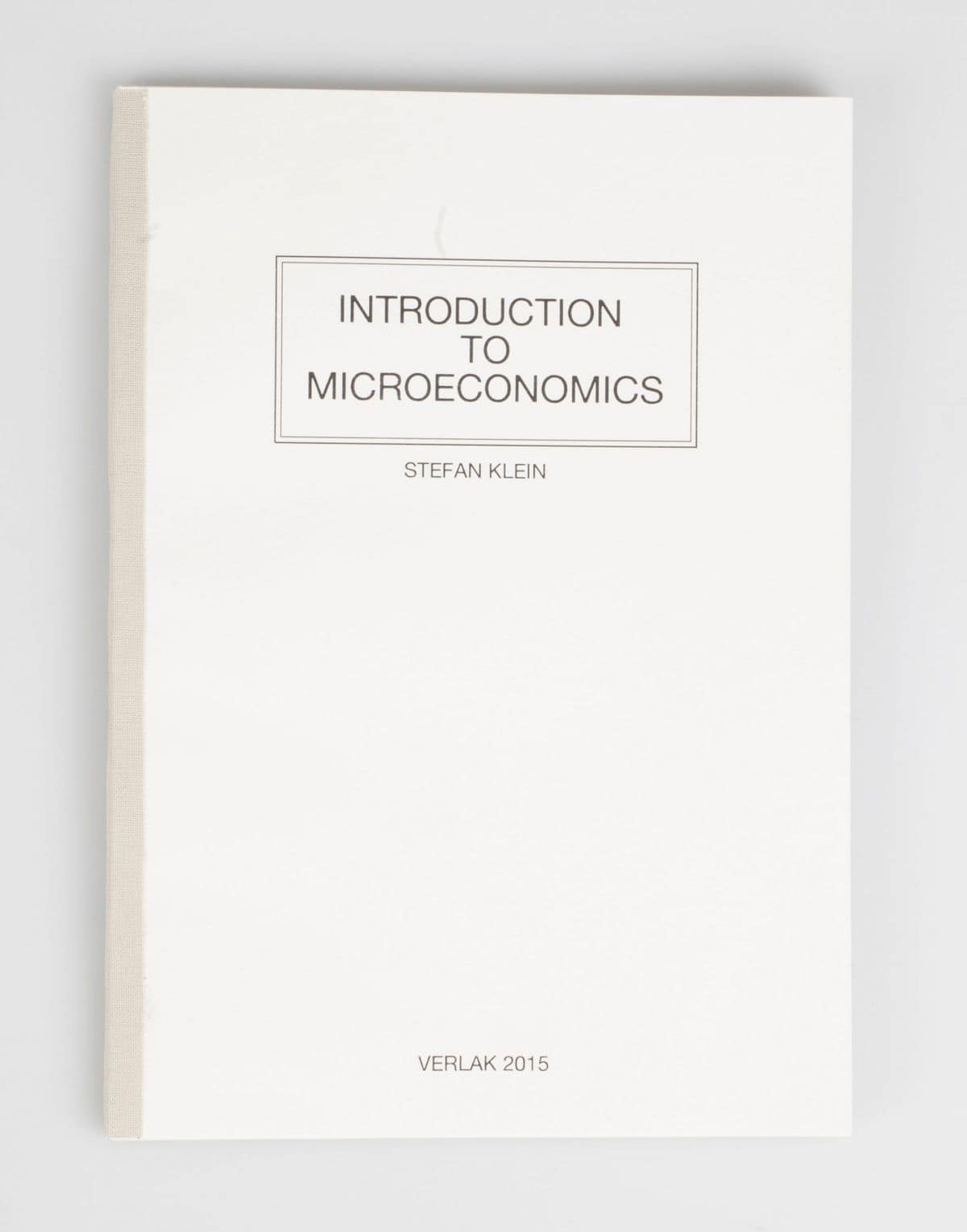 The book Mikroökonomie was bought on Amazon. Once it was delivered, it was returned and a refund was received. This action was repeated several times. All the receipts were printed and turned into a book called Introduction to Microeconomics. The book is now up for sale on Amazon for 49,95 € – the original selling prize of the book Mikroökonomie.

Stefan Klein received a Master in Fine Arts from the Public Arts and New Artistic Strategies Program at the Bauhaus University in Weimar.
He has exhibited in many different places and formats around Europe and done various forms of artist residencies, amongst others Bregenz Biennale (2018), Berlin Biennale (2016), Galerie Daniel Marzona (2017), Kunsthalle Tropical, Island (2016), Berliner Herbstsalon (2015), Fellow at ZK/U Berlin (2018), Fondazione Antonio Ratti // XXV CSAV – Artists Research Laboratory, Como (ITA) (2019), Bauhaus Museum, Weimar (2019). His work can be found in collections like No Show Museum, Johannesburg,; MoMa, NY; Joan Flasch Artists’ Book Collection, Chicago.
He is also a founding member and runs the independent publishing house Verlak. At the moment he is doing the residency “One Year with Stefan Klein (Desk Edition)” at the KW Institute for Contemporary Art Berlin.