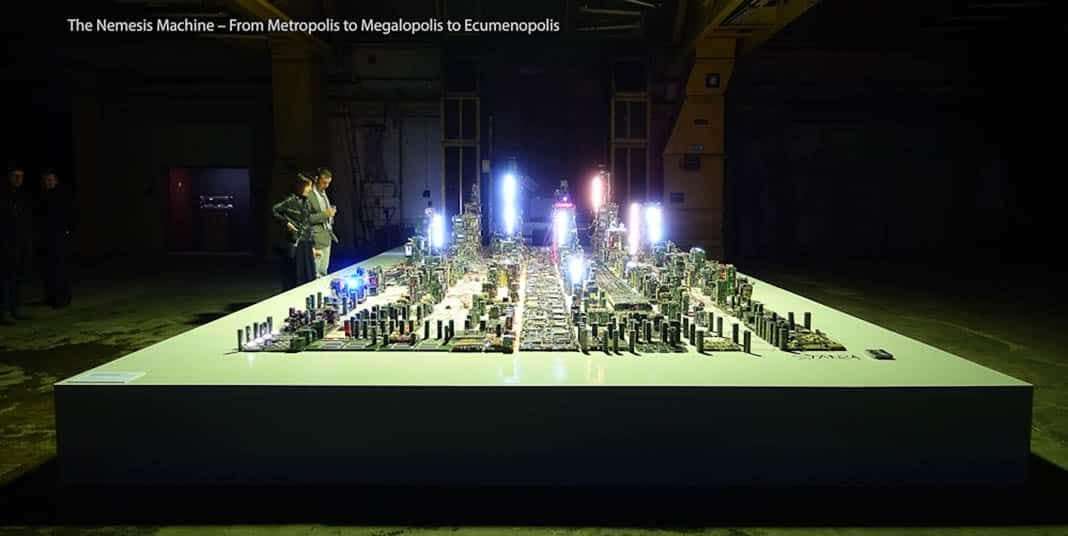 The Nemesis Machine – From Metropolis to Megalopolis to Ecumenopolis | 2017

The Nemesis Machine is a mini, mechanical metropolis that monitors the behaviours, activities, and changing information, of the world around us using networked devices and electronically transmitted information across the internet. The Nemesis Machine has become a large installation which is adapted and customised to each place where it is displayed. The artwork represents the complexities of the real time city as a shifting morphing and complex system. It visualises life in the metropolis on the basis of real time data transmitted from a network of wireless sensors. The artwork you see is a city of electronic components that reflect in real time what is happening elsewhere. Small screens show pictures of the visitors so that they become part of the city.

The artwork reforms this information and data creating parallel realities. At the heart of this work lies an interest in the urban environment, the networks of cameras and sensors to be found there, and the associated issue of privacy and control. The artwork sits in the middle of concepts for smart cities, The Internet of Things( IOT) and the new technologies that monitors the real time environment. In appearance, the Nemesis Machine is like Big Brother parsed through the lens of the Internet of things. It gives visitors a bird’s eye view of a cybernetic cityscape, where skyscrapers are constructed of silicon and circuit boards.

The data and their interactions – that is, the events occurring in the environment that surrounds and envelops the installation – are translated into the force that brings the electronic city to life by causing movement and change; that is, new events and actions to occur. In this way the city performs itself, in real time, through its physical avatar or electronic double. The city we see performs itself through an-other city. Cause and effect become apparent in a discreet, intuitive manner. When certain events occur in the real city they cause certain other events to occur in its completely different, but seamlessly incorporated, double. The avatar city is not only controlled by the real city in terms of its function and operation, but also utterly dependent upon it for its existence.

The artwork also focuses on how we consciously or unconsciously influence each other, and also the degree to which technology may in future take over control of our own bodies and our presence in the city. This is a city where there is no privacy. The Nemesis Machine asks how new technologies can imagine a world where we are liberated and empowered, where finally all of the technology becomes more than gimmick and starts to actually work for us. Or will these technologies as the machine suggests control us, separate us, divide us, create more borders.

The artwork operates within the themes of the urban landscape, surveillance culture, privacy and the connected city
Poses the question of who owns the data while speculating that virtual borders will soon create more systems of control.
The wireless sensor network is set up to “visualize” the space all around us as ‘worlds’ full of data across the internet.
The artwork is a smart city a hybrid internet of things (IOT) installation.