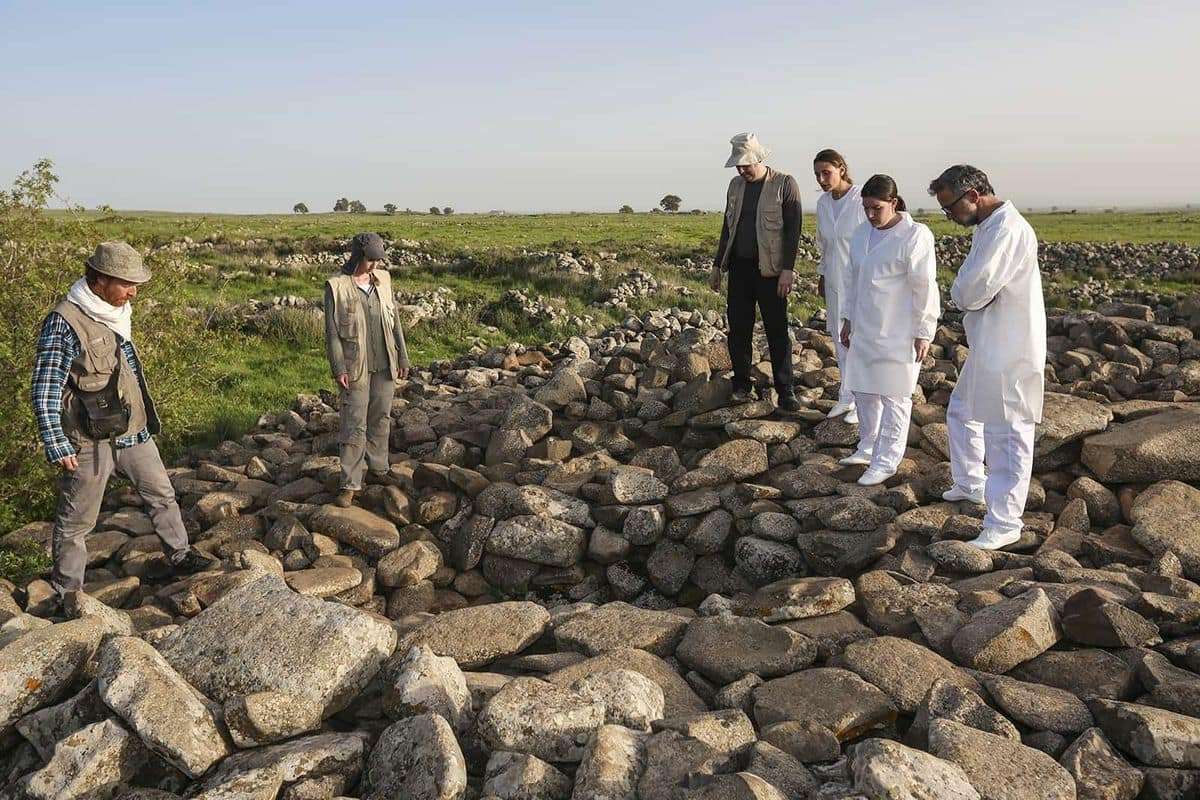 Shahar Marcus's new video work El-Rujm was inspired and shot at an archaeological site – Rujm el-Hiri that consists of large stone monuments, placed in the middle of a field in the Golan Heights. The purpose of the monument, as well as the identity of those who built it are still unknown. Archaeologists presume that this site served as a religious center where various rituals took place. Furthermore, it strongly resembles ‘crop circles’, consequently bringing to mind an alien intervention. The enigmatic nature of the site and its visual appearance led Marcus to create this work, referencing sci-fi genre films
The work itself is shot partly from above, and infused with an ominous soundtrack that enhances its cinematic effect and creates a sense of tension.
the work combines reality with fiction, touching upon themes of sustainability, ecology, archaeology, history and science fiction, while remaining an unsolved mystery, just like the actual site itself.

In the performance homecoming artist the artist Shahar Marcus driving with two young models at the back seat at the heart of the city of Dresden in Germany. During the ride the people of the town are being asked do they know or heard about the artist. None of the people know and most of them don’t care about art at all. Never the less while riding slowly around the city Marcus is waving to the people and the people are waving him back as if he is a known celebrity or a local Politian who is doing his campaign election right now. The drive implicates the gap between the art scene and the common citizen in small towns.

The video work "seeds" deals with mines that are still buried in the ground after the war was over. From a beautiful top-shot the camera follows three professional mine-removers. They move slowly in meditative movement in a no men’s land desert. They look for mines, find some and remove them. This act leaves a visible trail which the artist, dressed as a pioneer, follows, while sowing seeds, from a small bag (refers to Millet famous painting) on the same track the mines were removed from. The sowing as a healing gesture suggests a new hope to come.

Shahar Marcus (b. 1971) is an Israeli based artist who primary works in the medium of performance and video art
His most recent works deal with local political issues, by approaching iconic Israeli landmarks with a critical and humorous point of view. Thus, Marcus reflects on his own heritage, environment and the creation of local historical narratives. His works are influenced by the visual language of cinematography along with familiar themes and tributes to art – history and artists, such as Ives Klein, Paul McCarthy, Peter Greenway and Jackson pollock.
*Shahar Marcus is an active artist for over a decade and has exhibited at various art- institutions, both in Israel and around the world, including: The Tate Modern ,The Israel Museum, Tel Aviv Museum of Art, Petach Tikva Museum of Art , Charlottenburg, Copenhagen- Kunsthalle , Moscow Biennale, Poznan Biannale, Moscow Museum of Modern Art and at other art- venues in Polland, Italy, Germany, Georgia, Japan, the USA and Turkey.