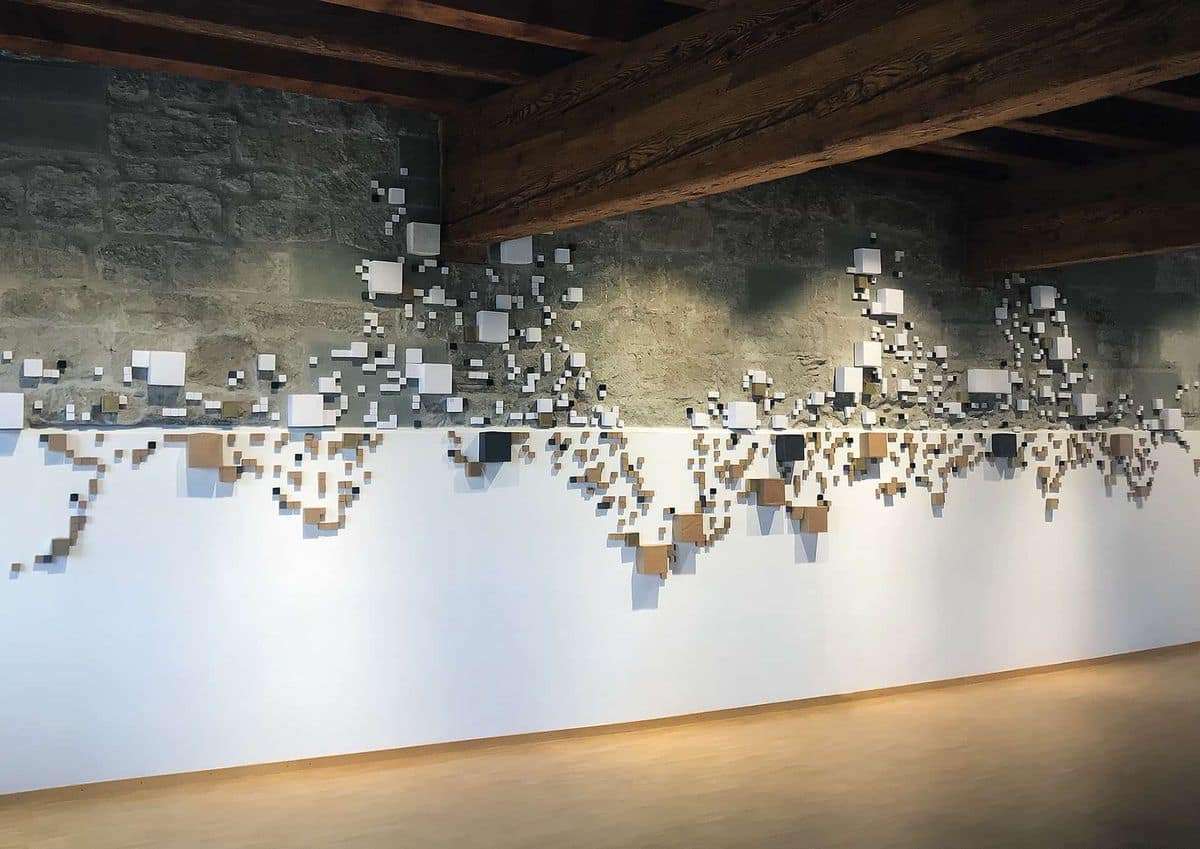 This is an interactive installation made available to visitors to the museum. It is an original work that they are invited to appropriate so the public can create their own happening and decide the limits of the installation. The aim is to stimulate reflection on our conscious or unconscious participation in the construction and/or destruction of walls. The reflection also concerns the moment when their construction exceeds us, when it becomes out of reach, inaccessible to our direct action; then requiring a form of physical and inner ascension in order to cross these walls. In a world specifically marked last year by the anniversary of the fall of the Berlin Wall, but even more so by the development of wall constructions between peoples and countries, it is urgent to reflect on our relationship to the Wall. The use of paper as the main medium refers to the ballot, as often the construction of walls is the result of our voting or abstaining from participation in the democratic process.

This interactiv diptych was designed according on the Feng Shui philosophy. The square being the geometric shape of the earth element, this diptych is therefore composed of four squares, two larger and two others that overlap and create a possible link between the two largest, according to the chosen arrangement of the two parts of the diptych. This composition evokes the symbolism of yin and yang, unified duality in harmony. Salt was then used; in order to take advantage of its chemical and aesthetic effects on liquids but also because it is associated with a rich symbolic. Salt is a necessary element for life, it symbolized the alliance, the fraternity, the pact, it is also at the origin of the word salary.The articulation between the background and the foreground of the paintings plays on the indefinite versus the defined, the sinuous versus the angular, the random versus the calculated, etc… the natural versus the human.

“WWW. ” #intervariactifSerials is a 30-Day digital performance on my instagram account. It’s a photo novel where a mother and her daughter interact with a diptych composed of paper boxes whose color reminds us of metal connected by red threads such as a canvas (« toile » in french) that we weave and which is connected to the “web” or canvas (for both same word « toile » used in French) ; installation and performance then become one. In this project, I stage the different possibilities of perception that this diptych brings to the viewer in order to question our typological definitions. Moreover, through my social network, I had chosen a mixed language to accompany her artistic process step by step. Indeed, I play with the French and English languages, the latter mainly for computer vocabulary. I also predefined and documented the conditions for its production, such as the publication schedule, the duration of the performance, the daily digital labor to be carried out.

I taught for several years Plastic Arts and Art History . Now, I am fully devoted to the creation as well as the promotion of my artistic work in Switzerland and internationally. In my paintings, I concentrate on transcending the classical boundary between the work of art and the spectactor. My goal is that the viewer understands the process, the research and questions an artist asks him/herself during the creation of its artwork. In 2005, this gave birth to my first modular artworks on canvas or today as installation. In addition, I develop projects related to social media such as #intervariactifserials a digital performance that lasted one month, conceived as a photo-novel about our relationship with technology. And on my website, a selection of my artworks, interactive virtual duplicates with which Internet users can create a composition and then participate in the #interagisproject whose aim is to question our tactile relationship between the real and the virtual.