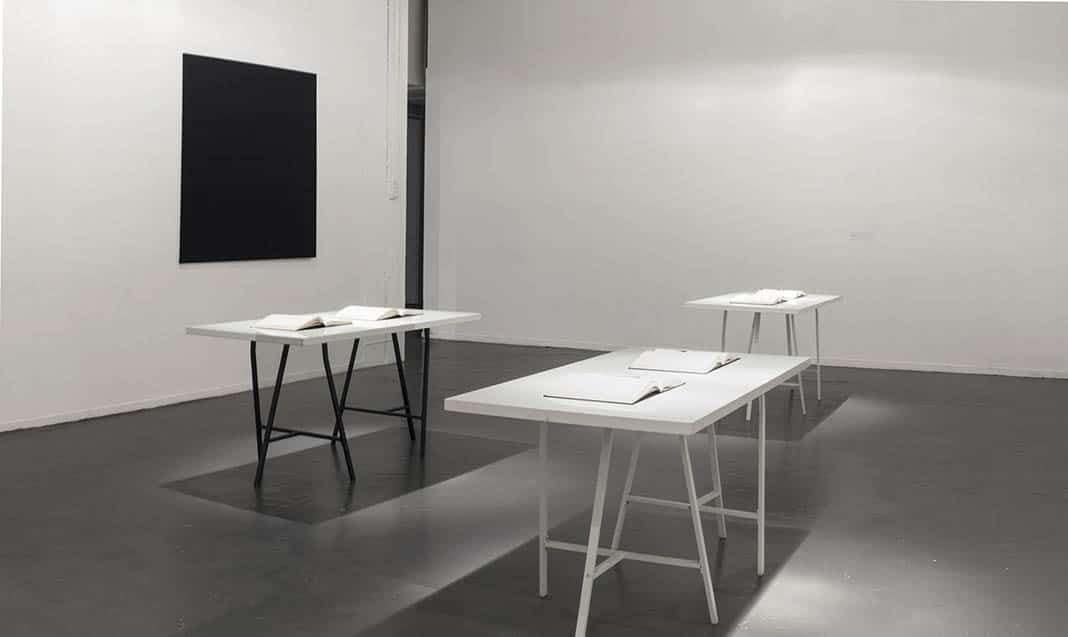 By examination of the stone layer by layer, Burek refers to its memory and age, scarred by nature. The veins of the stone not only represent a record of time but also of how it had been subject to constant modification through confrontation with history. Within the stone is contained an incredible background of history – it’s culture, economy and art as if the entire wealth of history of nature had been petrified within it, one that is so ordinary and yet simultaneously so powerful.
Sandra continues creating books concerning a knowledge of the country acquired from other latitudes, regarding the perception of the stone and how it changes its meaning in the context of culture.
The installation contains so far, 4 stone books from Norway Italy and Scotland.

0 <=> ∞ is a calculation of infinity as a probability. The installation generates an intersection of software (its operation code-language) and 2-dimensional space of the canvas. The black line is drawn on the surface of the canvas by kinetic machine, `revels´ the infinity of points on a plane as a cross-section of infinite lines running through its space regarding an understanding of Kandinsky Point and Line to Plane.
The drawn line is a theoretical line that represents the eye level of the observer referring to the horizon line (actual plane) figure 2, which is the closest to an infinite impression in the physical world. Operation code makes a mark on the surface of the painting with charcoal within, exposing language of software that signifies it corporeal. At the same time, creating dust line on the floor which indicates a time interval.
The examination ties to understanding zero as non-motion: a point, the emptiness of a primed canvas, and the void of a yet-to-be programmed Arduino. Using electronic and electro-mechanical components with computer control, a kinetic machine response to an analogue world by the use of software and hardware, translating the abstract language of data by giving it a shape of a horizontal line as infinity expression.
The ongoing investigation became an attempt of analysing the use of line in artistic creation and associations arising from it, by asking the intentional question: ´ is the line just a tool in an artist’s creations, or is it the artist’s awareness, transgression and existential implications where the line becomes a language in itself? ´
By posting resemblance as the link between signs-code of an Arduino and what they indicate, language is no longer a figuration of the world or a signature stamped upon things since the beginning of time. As Foucault´s writes the manifestation and sign of truth are to be found in evident and distinct perception(…)Language has withdrawn from the midst of beings themselves and has entered a period of transparency and neutrality. Moreover, it can be stated that when complete networks of signs link together and articulate accordingly to patterns accurate to meaning. Where relativity is a product of the infinite variety of experimenting, infinite assessments and perspectives.
Work symmetrically hung on both sides of the free-standing wall underlines an intersection of the void of an Arduino program and 2-dimensional space of the canvas, at the same time emphasize the title of the work ´0 <=> ∞´ regarding the point at infinity in geometry. Within this work, Burek suggests infinity in a visually perceptible manner. Collection of six books, is a result of a formal game of word ‘square’ and its figurative representation, standing one to another in a complementary relationship. The area of data elements is always equal to the surface area of the original figure, as each word is formed from the set of the same letters; square: squaer squrae squrea etc.
Work inspired by Ludwig Wittgenstein and his “Tractatus Logico-philosophicus”

Sandra Burek is a Polish artist living and working in Norway where in 2017 she graduated an international MFA program at Trondheim Academy of Fine Art. Her first MA an artist accomplished at the University of Arts Poznan, Poland in 2012. Sandra was granted BKH-Art Student Grant in 2017, she was one of the finalists of 2014 International Arte Laguna Price. An artist has been taking part in collective exhibitions in Italy, Norway, Poland Spain and Colombia. Burek produces a variety of works between sculptural objects, artist's books, drawings and paintings, recently researching programming and experimenting with sound. Selected individual exhibitions: 11-12/2018 B Gallery, Turku, Finland 08/2018 Prenzlauer Studio / Kunst-Kollektiv, Berlin, Germany 10/2017 Gallery Neuf, Oslo, Norway