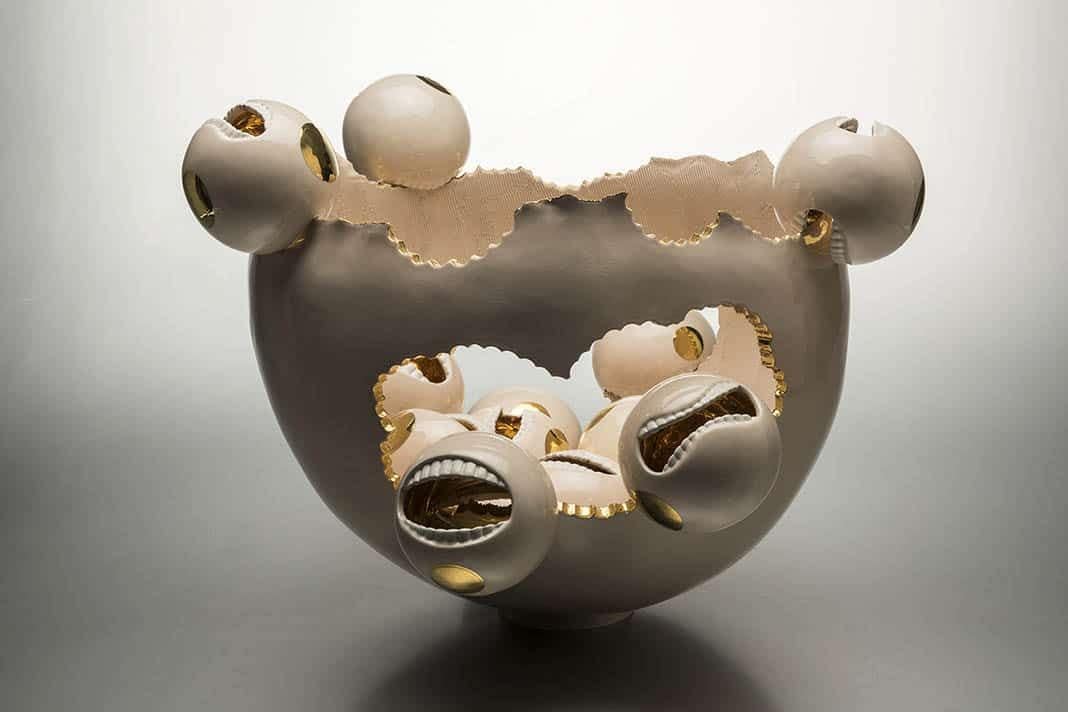 THE GLUTTONS is an unsettling time-capsule of our current art discourse.

Visually owing a creative debt to the medieval painter Hieronymus Bosch, Roberto Cambi re-interprets the archetype of the vicious circle – the ouroboros or snake biting its own tail – to reflect on the impasse plaguing the art world.
Art as an urban elitist activity is not reaching out to people beyond its usual circles.
Art is devouring itself.

On the one hand the artistic community has become desperately self-obsessed.
The creative process has turned into merely a PR exercise with artists, curators and galleries devoting much of their own time and resources to promote themselves to their peers.
Increasingly it is a world which eats its offspring too. Vibrant newcomers are swallowed by powerful galleries and spat out as money-makers and celebrities. Their voice is no longer heard.

On the other hand the public is no better.
Blockbuster exhibitions attract hordes of visitors who are more interested in being part of the circuit of culture than engaging with the art on show. The fear of being left out.
At times they cannot even see the exhibits because of the sheer number of people in confined spaces.
They blindly gobble up as much as they can and move onto the next big event.

THE GLUTTONS, whichever group they come to represent in our mind, are like locusts. They leave a barren landscape behind.

First seen on the island of San Servolo in the Venetian Lagoon, the installation is being exhibited in the Chapel of the House of St Barnabas in London.
Erected between 1862 and 1864, the building was partly designed from the plans of a Romanesque chapel attached to the Abbey of Montmajeur in Arles.
It is a symbolic and evocative setting for an installation which highlights the complex relations with rationality, faith and superstition. A look at CLOCHARD is a glimpse into Roberto Cambi’s stream of consciousness as he walks through the city.

The resourceful recycling strategies of homeless people and the choices of an increasingly environmentally conscious society are born out of different needs, yet they strike the artist as carrying very similar aesthetics.
Whilst the second are promoted in every possible way, the first are less evident as they are aggressively kept out of sight by defensive architecture.
It speaks volume about the collective attitude to poverty, which is forcibly kept out of sight and out of mind.
Even when dealing with one of the lowest human common denominator – trash – people find a way to discriminate against the most vulnerable.

Resources are often scarce for those sleeping rough, yet creativity abounds. The narrative of survival is often chronicled through the acquisition, transformation and disintegration of plastic bottles, rags, supermarket trolleys, suitcases and carrier bags, newspapers and cartons. These are not only re-used within an inch of their lives, but are cleverly pulled apart and re-assembled to serve different purposes.
They also happen to define a person in more ways than one. They are the few prized possessions of someone who has lost everything and sometimes become the focus of attention of passersby doggedly refusing to acknowledge a human being standing besides them.

Roberto Cambi takes inspiration from the new lease of life given to these objects to create similarly assembled pieces.
Familiar shapes are taken apart, combined and put back together through the medium of ceramic.
They look rugged, but are inherently fragile. Much like the life of those living on the streets.
Inventiveness and resilience are really two faces of the same coin.

There is no denying that circumstances are incredibly difficult for the homeless – a daily struggle with hardship, physical and mental problems as well as addiction – yet people hang on to their hopes for the future. A resolve to pull through. A yearning for better things to come.
The gold trims in this new series of works are there to catch the eye, they are glimmers of beauty and optimism in places where you would not necessarily expect to find them.

Born in Cassano Magnago in 1960. Sculptor, painter and studio glassmaker, he started exhibiting his work at the end of the 1970s while still studying at the Ballardini Art Institute in Faenza. He attended the Fine Art Academy in Bologna. He taught different workshops at the Department of Ceramic Art at Seoul National University of Technology in South Korea. Award in Excellency at the Mopko International Ceramic Competition in South Korea in 2000. His installation It’s Only a Matter of Time received the Open Award award at the Arte Laguna Prize in Venice in 2014. Showing a restless streak and a penchant for pop and playful creations, he often creates his works as part of a wider project or site specific installation. He has two daughters. He shares his time between Milan and London.