Battleground 2 clay, cotton,pigment, wire, and wood 2 H X 2 W X 3.5 D meters
I feel ineffable sadness watching nature not able to retain its former composition. The earth has asked little of us. Stephen M. Meyer in his book End of the Wild wrote that there are three species existing on Earth today: Weed Species, any species that can co-exist with humans such as deer, coyotes, rats; Ghost Species, here now but with an extinction clock running down, think elephants and lions; and Relic Species, plants or animals of which one or two are left. Battleground 2 is nature poisoned, and humans, represented by buildings, in ruins. Evidence left on the battlefield does indicate who won. Is this what we want?
In having recently moved from a lifetime of painting to the practice of sculpture I have been able to expand my expression; that is, to say something without having to abandon an abstract aesthetic. It has been liberating to explore the world of materials 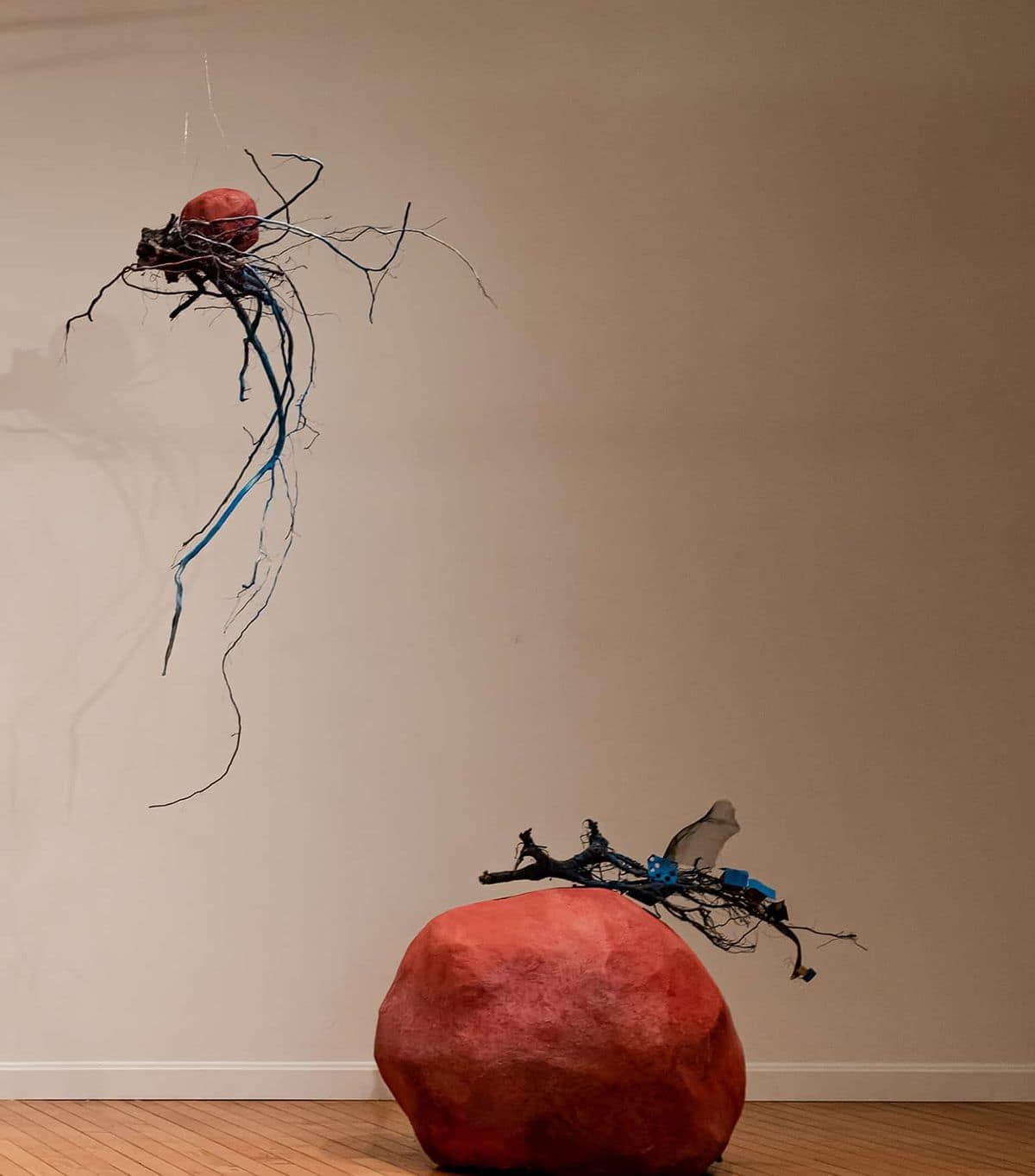 Large and Small Red Planets cardboard, cellulose, screen, wire, and wood 2.4 H X 1.8 W X .9 D meters 2019
This piece was part of the show The Daily Planet. The Daily Planet was reporter Clark Kent’s (also known as Superman) newspaper. Our daily planet will not be saved by Superman but maybe this is our chance to atone by physical and conscious action. It would be such a great turn of human behavior, really an atoning of the spirit. The idea for this piece came from reading Bruno LaTour’s book, Down to Earth. He said that at the rate we have been going we need three planets. The image has stayed with me. I have been thinking of planets, ones that don’t have potable water, breathable air and a lush environment. I am very motivated to make more imaginary planets, those mysterious orbs out there to which we are tied. Aerial clay and oil on panel 1.22 H X 1.8 W meters 2017
This is the piece which turned me from painting to sculpture. I had been building out my panels more and more to achieve a map-like “terrain.”
This piece is made from a thousand plus clay balls and is inspired by aerial views of jungle and dessert.

Rhonda Smith’s work reflects the great aberration of we humans destroying nature, the very thing that sustains our bodies and souls. Rhonda Smith’s US solo exhibitions include: The Daily Planet, Anderson Gallery, Bridgewater State University, MA, 2019; Oh That Beautiful Planet, What Have We Done? at Boston’s Kingston Gallery, 2019; Walking on Rock and Water at U. Mass Amherst’s Hampden Gallery, 2017; And There Was Matter at Kingston Gallery, Boston 2014. Her work was also chosen for Fragile Navigation at Danforth Art Museum, Framingham, MA 2012; and Particles and Waves, Iliad Contemporary, NY, NY 2012. She is part of the Boston, MA community of artists and works as well in southern Maine. Her education includes a BA from St Lawrence University, Canton, NY and further education at the School of Museum of Fine Arts, Boston and the Cooperativa Mosaicisti, Ravenna, Italy. She has been a fellow at the Vermont Studio Center.