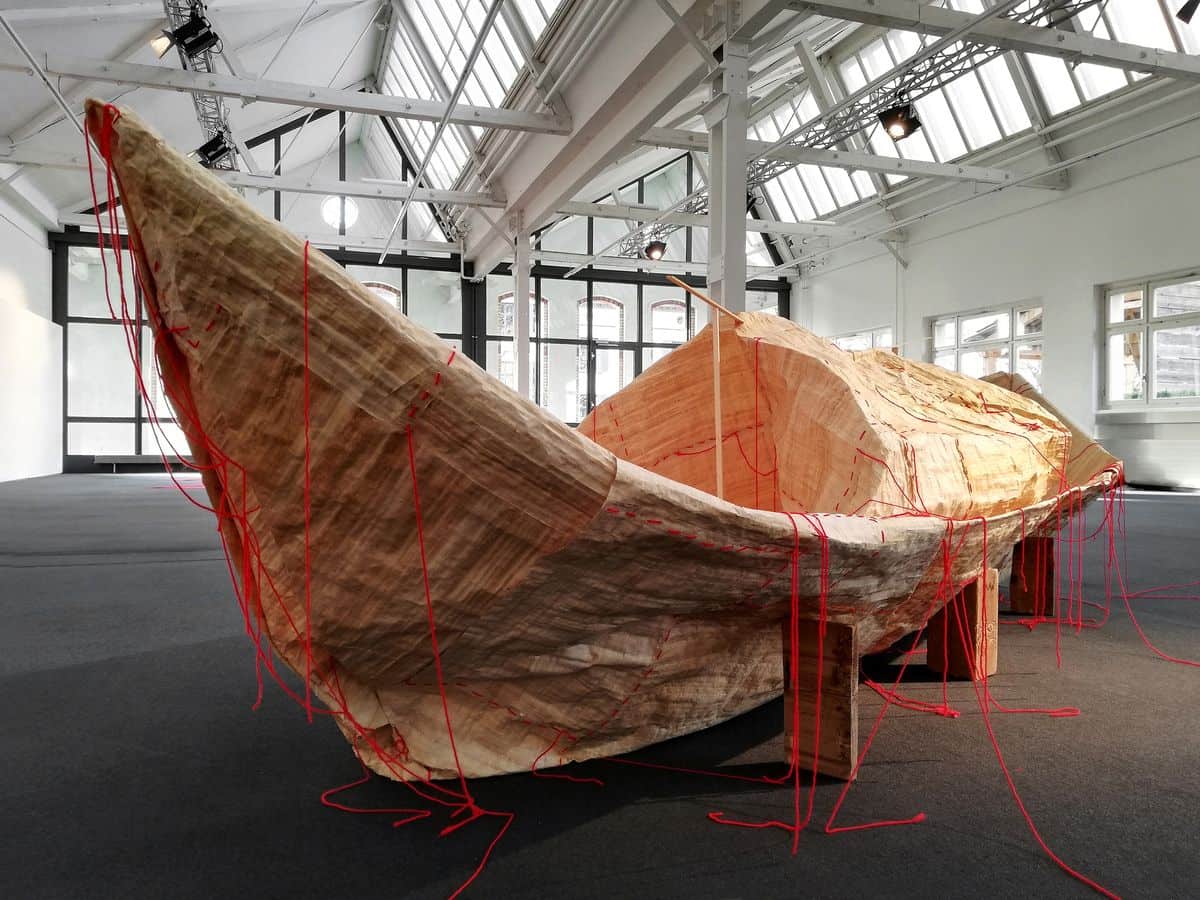 My work Memories of Tomorrow relates to the long history of concrete use and cultural connotations of papyrus. The huge ark is entirely made up of handmade papyrus sheets, which I sewed together with a red thread. I bought the papyrus sheets in al-Qaramous, a village in the Nile delta: each sheet corresponds to a fragment of a craftsman's life.

For the ancient Egyptians the boat carried the meaning of the transition from life to death and vice versa. The ark, in the biblical sources; in Mesopotamian mythology and Hinduism, is a symbol of salvation, it contains the elements of life and continuity, it marks the end of a cycle and the beginning of a new one.

Although the representation of the boat refers to tragic realities linked to the flows of migrants in the Mediterranean region, the ark embodies a sign of hope: Metaphorically it represents our world transition phase, characterized by migrations and environmental mutations.

In Islamic art, the girih are geometric motifs of perfection and symmetry. Symmetry is an expression and a fundamental tool of the human mind for the processing of information. For the installation I broke the mathematical perfection of the girih-pattern in favour of social perfection.

The strips of red carpet laid on the floor formed an imperfect girih motif, on which the audience was invited to walk on without shoes and without leaving the red track.

The "red carpet" is a sign of exclusivity, fame, power and success and at the same time recalls the carpets placed in mosques with a diametrically opposite connotation.

The small carpet strips forced the audience to completely change their gait, and the inevitable encounter-clash caused a feeling of uncertainty and unease in the public. With this work I investigate the influence and power that objects have on changing human behaviour.

This video was made on the CMA CGM Georgia cargo ship during my voyage from Genoa to Newark. In the video, the time dimension is strongly accentuated and it is perceived as a disturbance element, in fact, the video is composed of a single one-hour-long scene in which the only movement is given by the flow of water and the slow and progressive displacement of shadows reflected on the containers. Although the video was shot at sunset, the sunset is not visible but only perceivable. The romantic connotation usually attributed to the sunset, in the video is totally annihilated by the deafening background noise produced by the cargo ship engines and the foreground view of bulky containers.