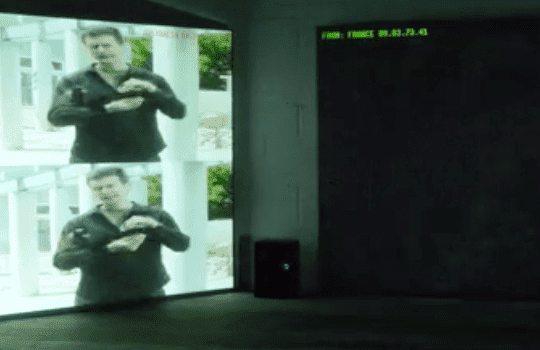 In the context of omnipresent telecommunications surveillance, “The Pirate Cinema” makes the hidden activity and geography of Peer-to-Peer file sharing visible. The project is presented as a monitoring room, which shows Peer-to-Peer transfers happening in real time on networks using the BitTorrent protocol. The installation produces an arbitrary cut-up of the files currently being exchanged. This immediate and fragmentary rendering of digital activity, with information concerning its source and destination, thus depicts the topology of digital media consumption and uncontrolled content dissemination in a connected world.

“Predictive Art Bot plays with a convergent future in which there will be no difference between people and machines – the dark vision of Ray Kurzweil and his colleagues at the Singularity University. This vision has a long heritage – in the earlier part of the 20th century, Lacan and the surrealists played with automatic writing and possible non-human futures; in the 1950s the cyberneticians and futurists experimented with creative or expressive automata. Raymond Queneau to my knowledge created the first algorithmic poetry – his 100,000,000,000,000 sonnets.

Today, the algorithm seems to be winning the day: our lives, purchases and political and cultural views seem increasingly governed by what Facebook, Google and Amazon algorithms have decided not about who we are, but who our domesticated future selves will be. Where is the role here for the new perspective, the artistic insight. In the deeply ironic Predictive Art Bot, Disnovation produces a work which is at once an inspirational conceptual feed for future artistic tropes and a commentary on the vacuity of trusting our very selves to algorithmic culture.” — Geoffrey Bowker

DISNOVATION.ORG is a working group based in Paris, initiated by Nicolas Maigret and Maria Roszkowska. At the crossroads between contemporary art, research and hacking, the collective develops situations of disturbance, speculation, and debate, challenging the dominant ideology of technological innovation (techno-solutuionism, techno-escapism...) and stimulating the emergence of alternative narratives. They recently edited The Pirate Book, an anthology on media piracy. Their research includes artworks, curation and publications. In 2018, they received a Design Trust Grant (Hong Kong) for a research about China's Shanzhai culture.Their work has been presented at numerous venues and festivals internationally such as Centre Pompidou, Transmediale, ZKM, ISEA...