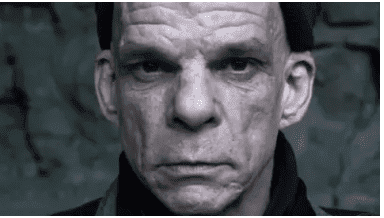 “Frames, polysemous term which means both “frames”, “images” of a filmed sequence or “silhouette”, is a video work presenting individuals curled up and constrained by the size of the boxes within which they evolve. The boxes, eight boxes of wood assembled vertically and horizontally to form a pyramid, contain a body, at the same time isolated and connected to others by its condition. Taken individually the body interprets its own score of gestures, considered within a set, it participates in a kind of choreographed piece.

Nicolas Clauss films inhabitants of Le Mans, in the dress code of their choice. They are neither professionals of the dance nor the theater. The artist concentrates all his attention on the movements produced, not defined beforehand, although oriented by confinement. If they are to be executed as naturally as possible in a somewhat exceptional situation, it is a posteriori that the artifice intervenes, based on experiments on the filmed image.

Movements of the body, now reified, are diverted and manipulated to be slowed or split, then repeated: oscillatory movement of an arm, a foot, a pelvis, from left to right, from right to left. Elbow-hand-hand-elbow, foot, foot, foot, body abuts, insists, starts again. As if connected to invisible electrodes that would send electrical stimulations, the limbs perform jolts. The result is a feeling of strangeness that sound creation, produced synchronously played, reinforces.

To move in a box, what for? Frames becomes a new projection of the interrogations that Nicolas Clauss has been going through for many years to believe his training in social psychology and his previous achievements. In what ways does our individuality express itself? How is our behavior influenced by the group? What are the human interactions at stake? What behaviors do they generate? Sometimes the matrix (the group, the box, etc.) envelops, sometimes it absorbs.

The corpus of works by the artist is nourished and enriched by recurrence. From a constituted group, the artist extracts a body and by different processes, manipulates it, breaks it down, accentuates, emphasizes or repeats its actions, to give it a new state. The image is stretched, dilated, the camera zooms and unzooms, the bodies operate vibratory movements, the gaze the objective (and by the rebound effect, the observer). Body of the individual and social body. Choral bodies. The crowd is abstracted, the being, in its singularity, becomes subject of representation.

Painter repented, Nicolas Clauss attaches to the composition. Frames (the periphery of the boxes) line each of the moving “portraits” or the empty boxes. The frame signifies the limit and isolates the subject from any temporal and environmental context; it marks a break, denies off-camera, and is a metaphor for social and behavioral patterns. The whole forms a polyptych which is observed at a distance, in its totality, and in sequences, by fixing the attention on a particular screen.

If Frames writing is precise, the implementation protocol set and digital tools perfectly mastered, once started the installation responds to a random program generating infinite combinations. Random mode is considered both as a work tool and as a formal language. It engages no narration and allows a permanent renewal of what is played, without beginning or end. Open, constantly renewed, Frames let the unexpected through.” C.H.

MECHANICS OF THE INSTALLATION

The piece gathers 8 wooden boxes, each containing a screen. Each screen is connected to its own computer and can broadcast 4 separate bodies (32 people were filmed). The 8 computers are themselves connected to a master computer that executes the visual and sound partition. The work is played in real time and is constantly renewed. Regularly one body disappears to make way for another. The boxes can also be emptied of their contents leaving the image to an empty box. These compositional rules leave room for multiple combinations… as many tableaus as possible.

Agora(s) is a generative audiovisual installation. It is deployed on five, four metres (16/9) wide screens.
Two hundred three second sequences filmed in public spaces in a dozen different locations around the world form the basis of this work.
Agora( s) explores and deconstructs the position of the anonymous individual and his unconscient interaction with the outside world. Groups of individuals are formed by chance, linked solely by the fact they find themselves in the same place at the same time.
In these scenes of everyday life we see how individual bodies react within a mass, movements are repeated and set against a sparse and hypnotic generative soundtrack to form an overall choreography.
The filmed locations are geographically, culturally and economically different. Agora(s) examines the many ways we occupy and cohabit public places. We glimpse as passerbys and onlookers stand, sit, play, look up, as their actions overlap and collide in squares, parks, beaches and esplanades all over the World.

Endless Portraits is a series of portraits in motion filmed around the world. Presented on large vertical monitors, these are portraits of a new genre exploring the extension of images through time – eternally expanding moments. They have neither beginning nor end and replay indefinitely, according to a generative writing, consisting only of a few seconds of film.

At the end of the 80s, N.C. engages in self-taught painting while pursuing studies in social psychology. In 1999, he felt that the computer tool can offer new perspectives. In 2001, he created the site flyingpuppet.com where will be exposed sixty interactive tableaus "onirico-psychoanalytical" (2001/2009). The work will receive 12 international awards. Gradually, the artist abandons interactive forms to focus on generative pieces around the human figure taking as a field of experimentation the filmed image and its modes of deployment in time and space. In 2011 he created Terres arbitraires, installation for 300 portraits and 30 screens. In 2014 begins the series of portraits in movement, Endless portraits (shown at 104-Paris). Following are Agora(s) (2015), Traversants (2017) and Frames.