The large outdoor installation, “The Door”.

The large outdoor installation, “The Door”. A slender iron structure frames the landscape, whatever it is, to testify that the natural scenery is already itself a “work of art” but could also become a door to infinite inner landscapes. The large stones, of the same color as the female complexion, are derived from the ancient material of creation of which they still retain traces.
The perception-vision of the installation varies according to the atmospheric conditions and the territory in which the work will be set up. After the rain, the reflections of the puddle enhance the continuity between sky and earth. Stones in the clouds or sky touching the ground ? Contemporary human being must be educated in the perception of themselves in relation to the Universe to discover the fragility that underlies existence. 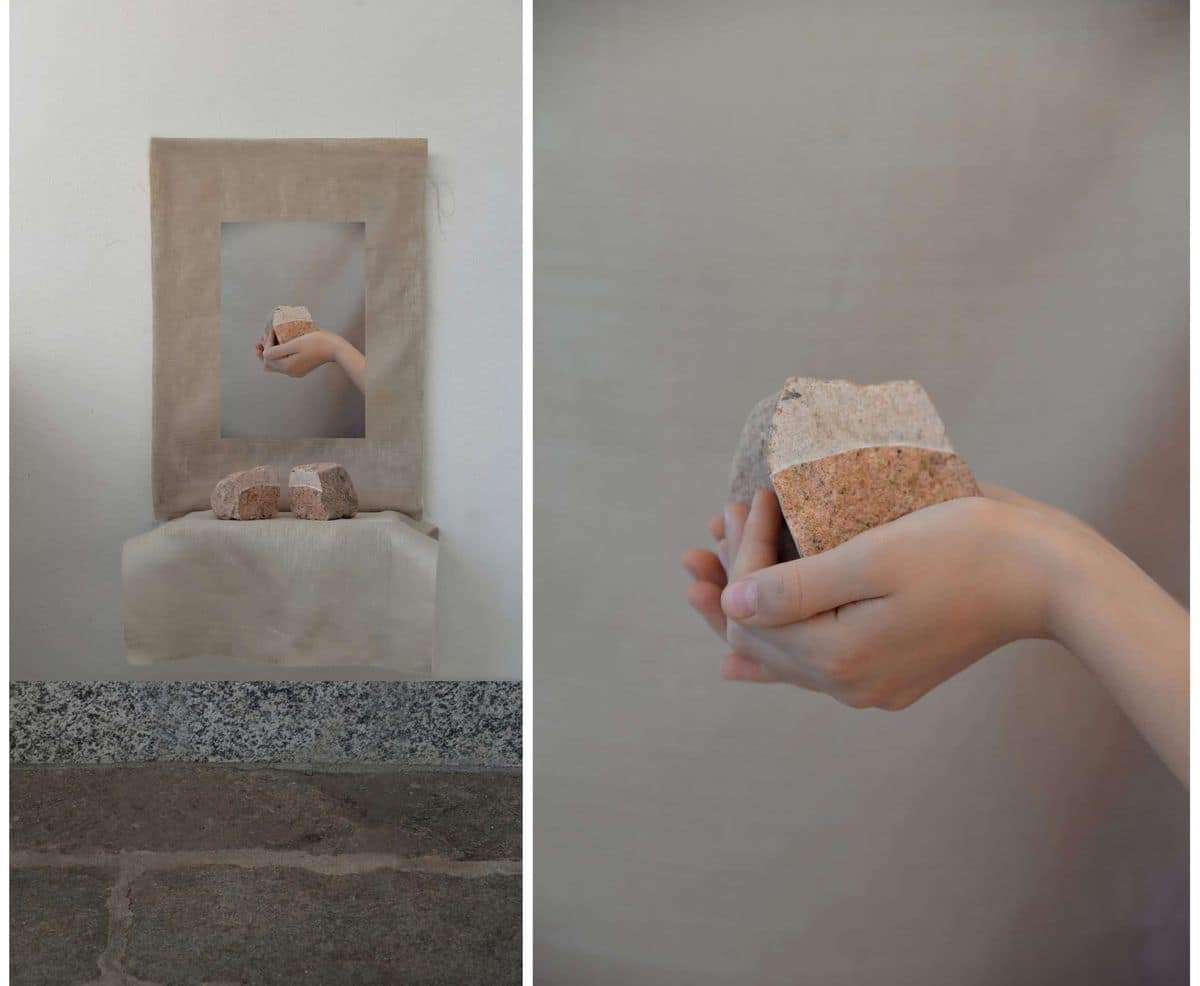 Vulnerabĭlis
[from the Latin vulnerabĭlis, derivation of vulnerable “vulnerare “] We are nature.
Within every living and non-living being there are still the echoes of creation. In an infinite cycle of birth transformation and death our union and resemblance with nature is consumed.
The open stone shows all its vulnerability and surprising analogy with the shades of female skin.
Do the hands of a little girl take care of the stone or do they want to turn the gesture into an offering? It was from the Anthropocene. A nature as sacrificial victim on the altar of human selfishness?

Synthèse visuelle. Nymphéas, paysage d’eau, le nuages is a contemporary work inspired by the Water Garden that Monet built in Giverny and the water lilies that constitute the final, if not absolute, culmination of his artistic development.
It is composed of 308 wooden tiles, painted en plein air around the Giverny pond .The reflections on the liquid surface have become a wide range of harmonious shades of grey-green-pink. The visual sensation of the sky and the vaporous movement of the clouds is suggested by the wood tiles of different thicknesses which, in the form-colour relationship, should allow the eye to overcome the geometric reading and stimulate a fluid and dynamic perception of the square space.
The work in fact represents an attempt to go beyond the surface of the canvas, in search of a new spatial dimension of the painting. A photograph “fixed” the moment when the transposition of natural elements into “colour” began.

Born in Domodossola in 1967, she lives and works between Milan and Lake Orta. Graduated at the Academy of Fine Arts of Brera in Milan, she has always combined her artistic activity with training in the pedagogical and didactic field, collaborating with Universities and National and International Structures . From 2006 to 2016 she worked together with G. Aloisi, an artist trained alongside leading figures on the international art scene such as Bruno Munari, Cruz Diez, Denise Rene, Fausta Squatriti and Luigi Veronesi, from whom she drew lessons and skills. She exhibited at the Metropolitan Museum of Modern Art in New York ( 2007 and 2009 ) two sculptures within an audience of artist-researchers gathered in the conference entitled: “Multimodal approach to learning.
Numerous international prizes won. As a visual artist she has exhibited in national and international group shows. Her works are part of private collections.