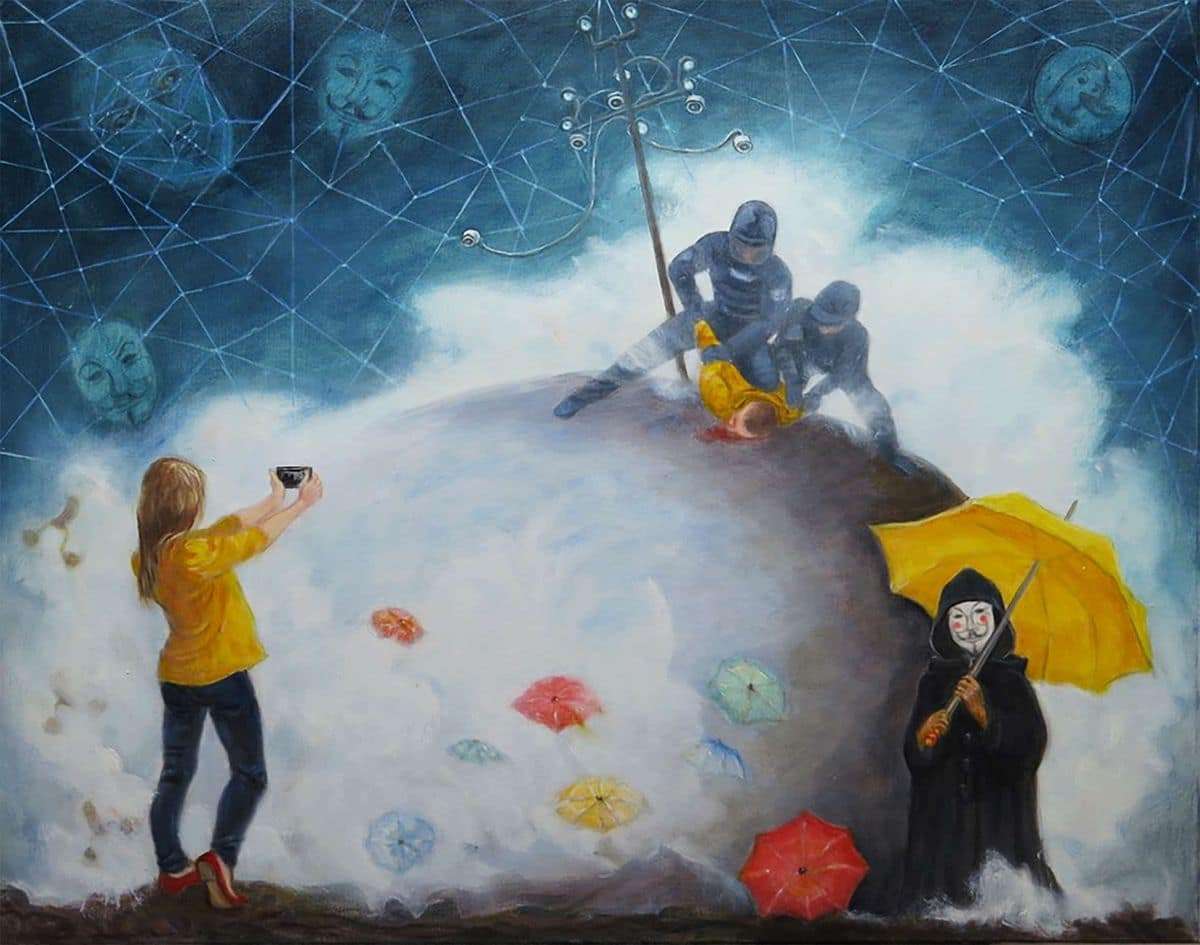 This painting is from a series focussing on the effect of our actions on society and the environment, when we do not take sufficient responsibility for our behaviour. The main areas covered are surveillance and control, global warming, and violence in society.

Both digital and real- world surveillance is increasingly used by governments and multinational companies to control ordinary citizens. Freedom and democracy are thus constrained, producing a less informed, more divided and conformist population.

However, resistance is possible, and there are a number of ways in which ordinary people can oppose or subvert mass surveillance systems. They include blocking and masking, using search engines which leave no digital trail, overt resistance and protest, and sousveillance.

This painting celebrates those ordinary people who have the courage and skill to resist and confound surveillance, and who therefore promote democratic freedoms. 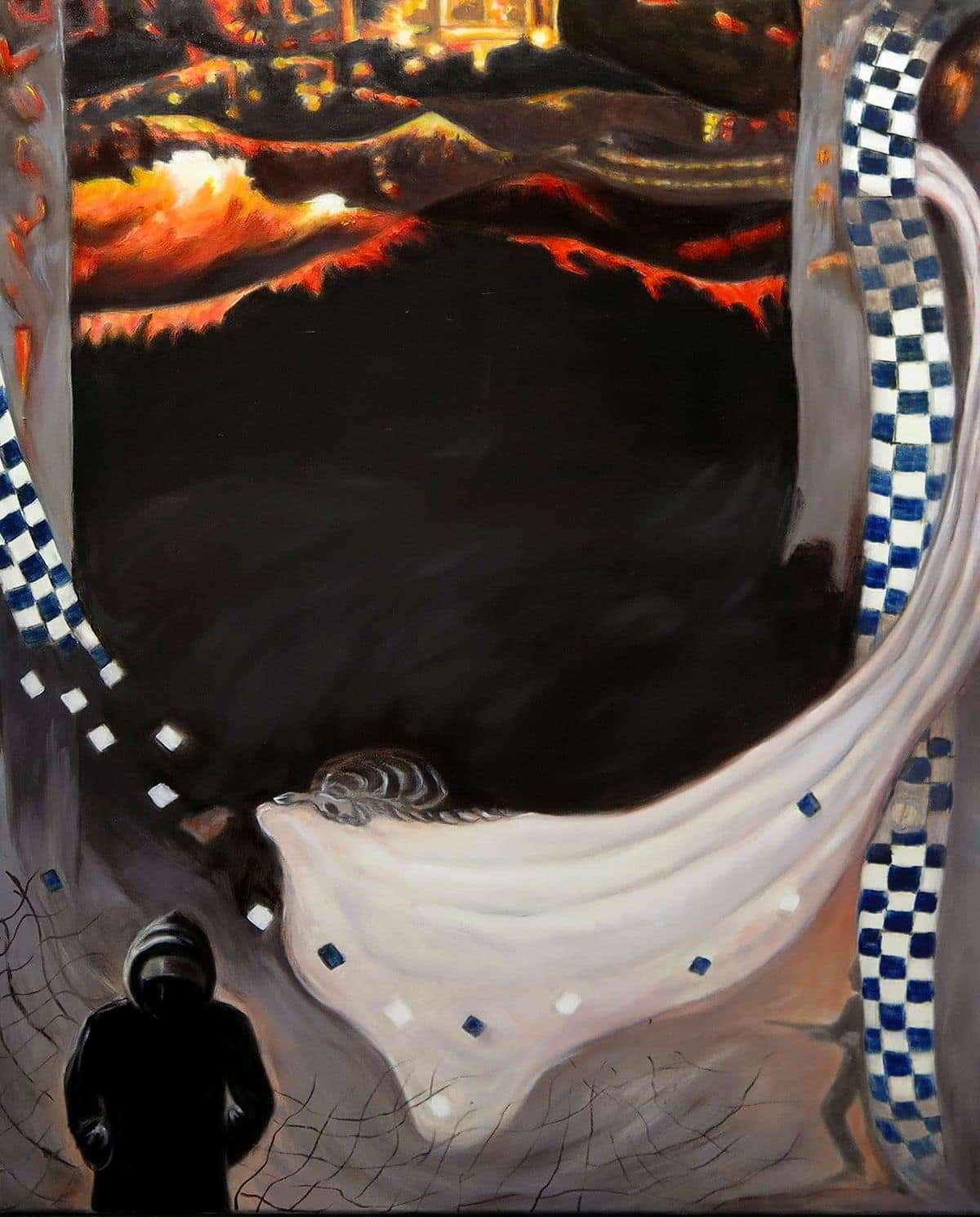 This painting is from a series focussing on the effect of our actions on society and the environment, when we do not take sufficient responsibility for our behaviour. The main areas covered are surveillance and control, global warming, and violence in society.

By handing our individual responsibility to others we are refusing to acknowledge that we are complicit in the increasing breakdown of social norms of civility, sharing and tolerance.

Uncertain whether they can trust institutions, people take action- including violent action- in defence of self or ideology. And they inflict violence on the land, which has no defence. 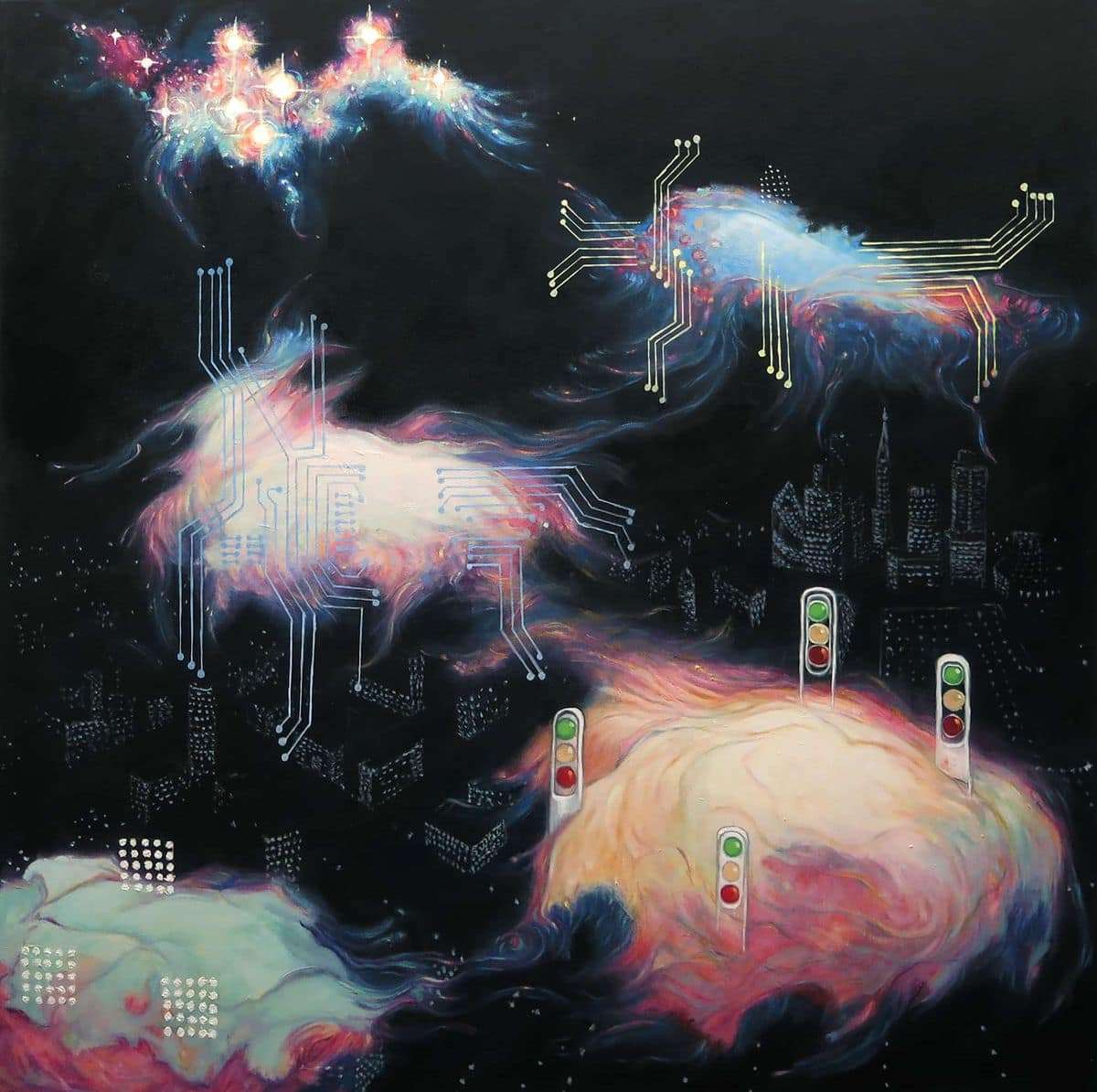 This painting is from a series investigating ideas of consciousness and the self. Essential questions are:

How does our subjective sense of self arise from our material bodies? That is, how does this feeling of ‘I’ come about for us in our daily interactions in the world, and then continue over time for the whole of our lives?

No-one knows the answer to this ‘hard problem’. But in this series, using a personal pictorial language created by adapting images from the Hubble Space telescope, information processing and neuroscience, I explore and reflect on this

‘Process or outcome’ depicts my understanding of the way that different levels and parts of the brain communicate, sometimes directly and strongly, and sometimes weakly. The outcome is a sense of embodied consciousness, which is the whole of our sense of self. But we do not know whether this is just the sum of its parts or something qualitatively different.

Following careers in education, clinical psychology and management, Australian painter Megan Jones fulfilled a long-held dream of becoming an artist, obtaining a Master in Studio Art from Sydney University in 2005. Since then she has had 10 solo exhibitions in Sydney, Australia, one in Greenland and an open studio exhibition in Berlin. She has also participated in numerous Australian group exhibitions, has exhibited in art fairs in Seoul, Korea and Beijing, China and has had residencies in Iceland, Greenland and Berlin.

Megan’s work focusses on the human condition, is generally based on considerable research, and has a psychological, philosophical or social emphasis. She uses traditional skills in painting to investigate issues of contemporary society, or to contemplate more eternal questions about the nature of being human. Her paintings are conceptually based and appear realistic, but the reality is symbolic rather than literal. Ideally, they provoke a dialogue with the viewer.