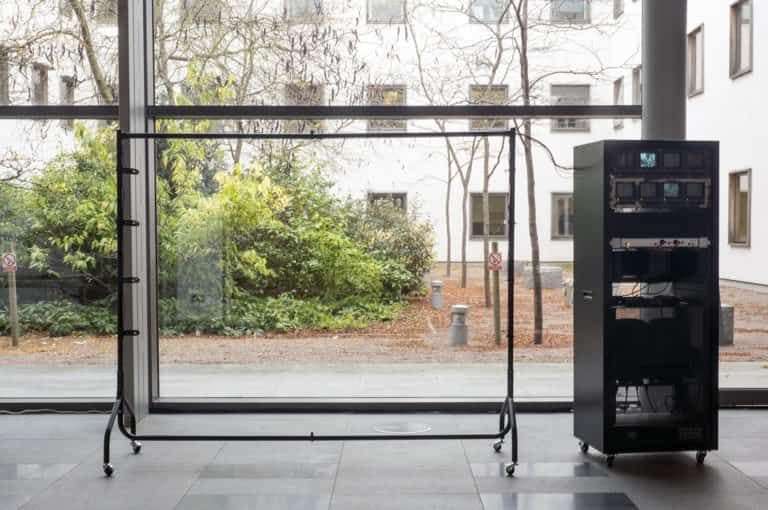 Memory Line is a multimedia artwork that reflects on the early days of computing and listens to computing veterans who remember their experiences of one of the world’s first ever digital computers, the memory machine, EDSAC. The work comprises interviews with three women who are veterans of EDSAC as they remember their time working with the machine and also includes interviews with a group of volunteers who are currently building a replica of EDSAC at The National Museum of Computing in Bletchley Park. They discuss the important role of women in early computing, and what makes them tick as pioneering computer programmers.
EDSAC is one of the first digital computers ever built with a programmable memory that allowed it to store data. Using tubes of mercury, the computer stored bits of data by sending ultrasonic pulses through the tubes and creating a memory feedback loop. The computer’s memories were literally soundwaves.

Sound highlights the complexity, intimacy and emotional texture of the relations between the self and environment. The noise of the urban, technological complex has become displaced within the suburban and remote locations of industry. The noise of these assemblages can be read as a metaphor for the blackboxing and obfuscation of the self, imbricated in what Jussi Parikka calls ‘medianatures’.

Juxtaposing found audiovisual footage from EURO2012 with a series of sonic investigations undertaken in Athenry, Fields of Athenry investigates how the delivery vehicle of YouTube acts as a metaphor for the collective data hub Athenry will become as the small town prepares to become host to Apple’s largest data data centre complex in Europe.

These Times is a complex composite of sound drawn from time pieces and church clock towers across the West Midlands (UK). The artwork is an investigation in to trauma. With These Times, Parker has remained true to form as a sonic investigator of mechanical objects, casting his ear on the vibrations of malfunctioning mechanisms. In conversation, the diverse time instruments used here each resonate with the scars of conflict. Before embarking on this quest he asked “where does hope reside?” These Times is his response. Parker’s artwork forms part of a series of critical conversations and artistic responses led by Dr. James Hodkinson, academic researcher at Warwick University and Dr. Mohsen Keiany, exploring challenging themes. Parker’s work resonates with Keiany’s exploration of destructive, mechanised dehumanisation and Hodkinson’s interest in the power of the arts to awaken empathy. The installation stands as a beacon of hope for the considerate and a warning to be vigilant.

Matt Parker is a Sonospheric Investigator; an artist researching the resonances between things. His multimedia works are influenced by the practice of listening; to unsound vibratory ecologies and the economies of noise. His research engages with sound studies, media ecology, field recording and geohumanities through a critical and spatial art practice.
Matt was awarded the Deutsche Bank Creative Prize in Music 2014, and is winner of New Art West Midlands 2016. He was nominated for the Phonurgia Nova Awards Prix Field Recording 2018 and shortlisted for the Aesthetica International Art Prize 2015. He has been artist in residence at The National Museum of Computing, Bletchley Park in 2015, a MEAD Resident with the British School at Rome in 2017 and an Art and the Environment resident at Joya: arte + ecología / AiR in Spain (programmed by Lucy Orta) in 2016.
He has a PhD on the topic of listening and media infrastructure ecology from the London College of Communication, UAL.