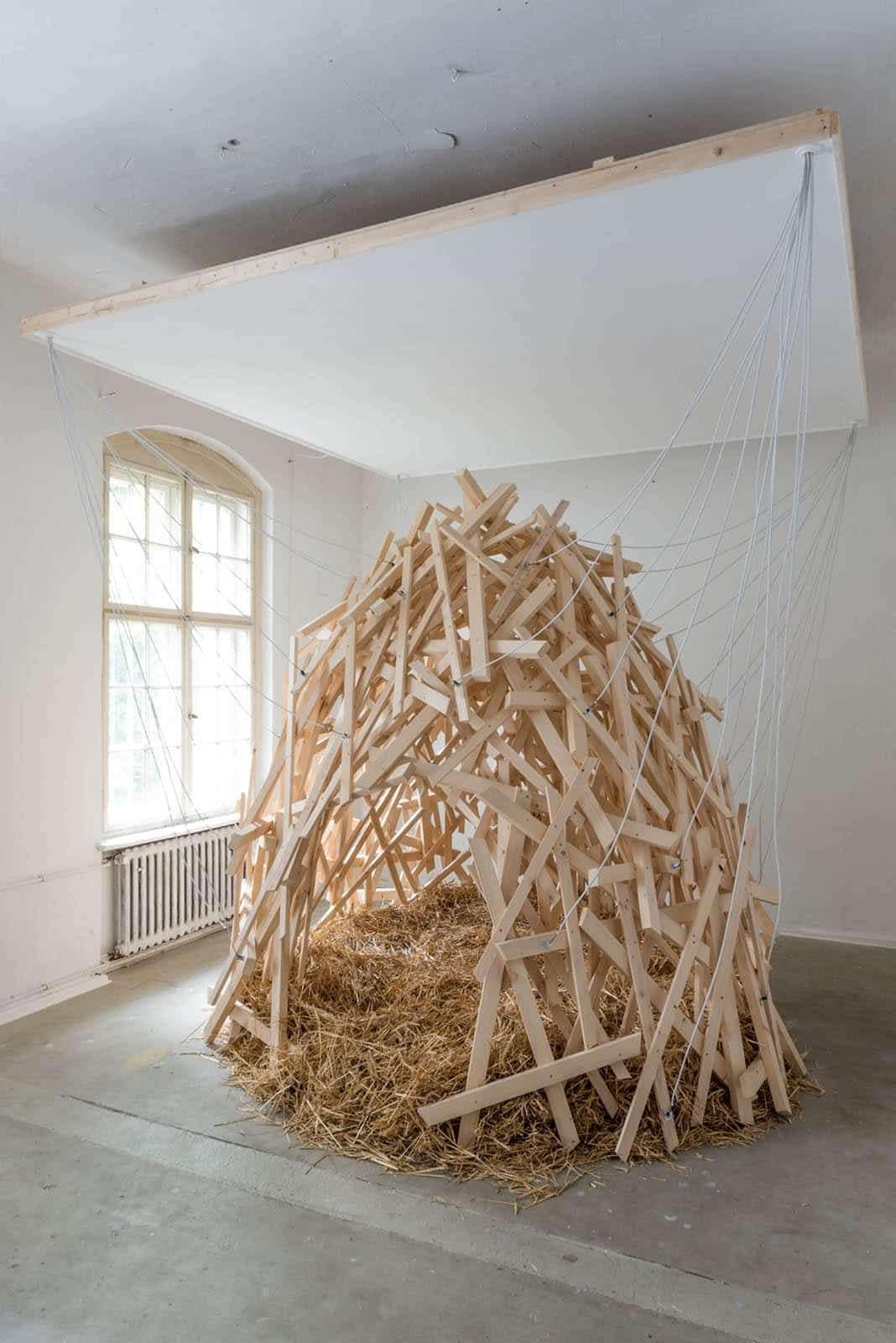 we’re either destroying ourselves or discovering the words for color. 2017

A lot of the thoughts that go into this piece are framed around Henri Bergson’s idea of Duration: a sensation of time, but what is outside the experience of the time passing at regular intervals. Duration becomes the keystone to how a certain perspective on the work was taken. At its heart the piece explores language/Self/culture and the way these interact to create a duration with an object deemed as having value. The floor of the space is covered in limestone dust, while the metal/concrete baskets are embedded among large piles of coal dust. Over time the baskets are dragged towards the wooden sculpture (Self), creating large black streaks on the floor. At the time I was reading a lot of Henri Poincare and interested in the way we validate a particular dimension of our physical space; how we become certain of how a place is constructed. I was thinking about how sound usually becomes a secondary aspect to what is already pulled out of a physicality space as main themes. This piece explored a memory I have of being with my sister in a forest and hearing rain on the leaves of the trees; it is a comforting and safe feeling. While the physical construction of this piece has these same qualities, they are generic and not connected to an emotional resonance. The sound created by the small solenoids striking the surface of the piece make the resonance needed for emotional completeness. The sound oscillates with a pattern that makes one feel the structure is breathing. if only there were a place just quiet and bright, that also smelled good. 2015

I come from a mathematics background and therefore have always been interested in the idea of incompleteness: the theorem that states all systems having basic logical foundations, will inherently be incomplete. Even so there’s a part of me that wants to be related to the absolute. To think that an object could be made that would perfectly be contained as well as contain its surroundings: an object as content and container, equally, at the same time. This piece was installed in Kostka Gallery, which itself is a perfect 10m cube. Stacked on the lights is 50kg of beeswax. The geometries/senses of the piece were supposed to engulf the surroundings of the gallery while conceding that the pieces were in fact changing over time as the beeswax fell through the lights. Absolutes only appear so at a very specific scale. At other scales, they become a series of discrete absolute objects.

Mark von Rosenstiel is a multi-disciplinary artist using mathematical algorithms that interact with and explore human relationships and emotions. Through feedback loops and technology he strives to reveal the middle ground people occupy -- the undeniably human place where truth is agonizingly close, but never touched. Mark’s site specific installations create internalized representations of the human experience that explore the boundary between observation and participation. Von Rosentiel’s work has been featured in galleries across the globe, from Seattle to Bangkok. He lectures on ideas of incompleteness, randomness, and scale variance in relation to art practice and the potential to discover truths by creative means.