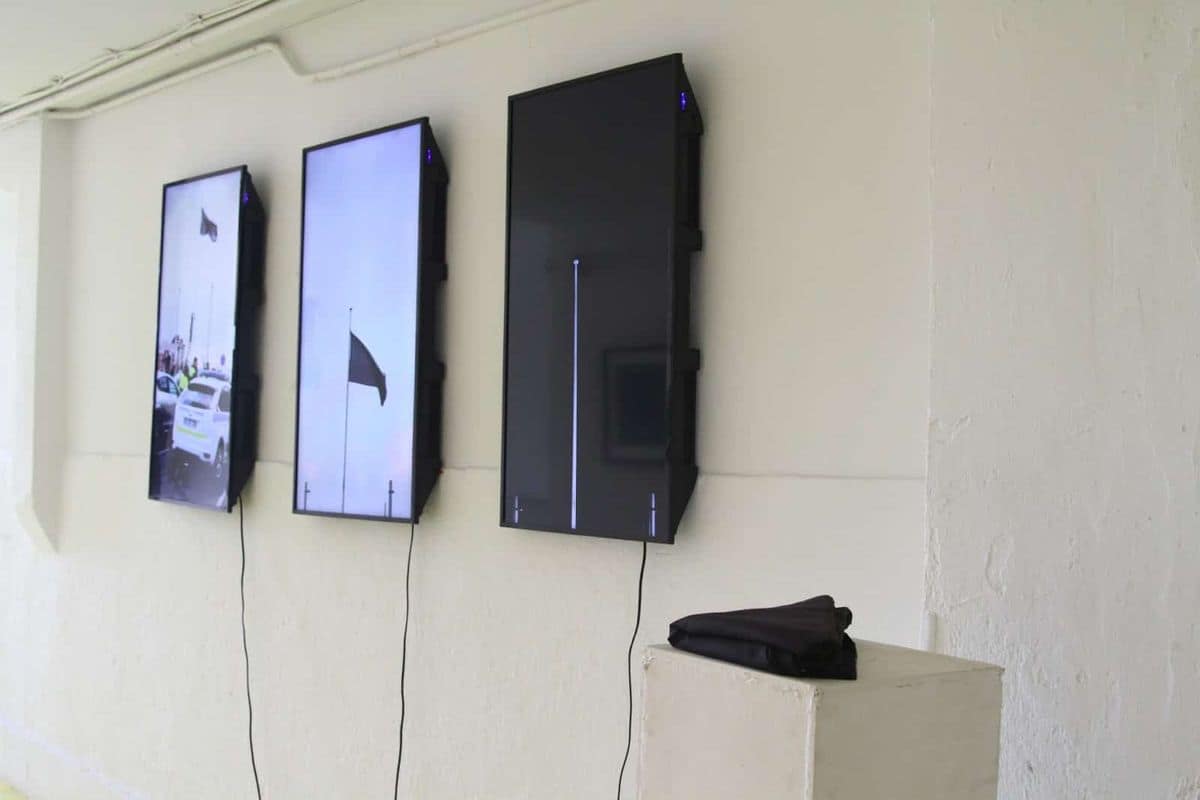 The spainish flag was changed for a black, apolitical, border flag, simply a nationality vacuum in a universal, totalitarian, fully unified world, where the individual is bounded and the possibility of change mutilated.

The flag only waved a few hours, the work was censored, the flag was withdrawn by firefighters, under the order of the mayor and a person from the delegation of culture came to pick up the flag of Spain almost midnight that day. The television media that filmed the action, by internal order, did not broadcast anything, but the written press did echo all that happened.

Work in progress (2013-), deals with memory, politics and poetics. The project corpus has been configured in different formats: installation, video, action and site specific intervention. A series of archaeological finds located in different landscapes. We are aware that the objects are nothing but motor units of the 80s and 90s of the national forces (Civil Guard, Army and National Police).

The work consists of 5 pieces. Shielded is a reflection on the instability of the structure of the body of the Civil Guard. In Fallen a bull down after the run, still holding his head up. Sunken shows a semi-buried car of the National Police and, Where the sun does not set, a military vehicle that appears from the subsoil. Crushed reduces a Regional unit to a piece of iron returning it to its original state.

All the works compose a reflexive poetry, a link to certain security and control systems belonging to a bygone era.

CASE GÜRTEL of the project – the state of the nation – talks about monetary transactions, talks about Capital, its transfer, talks about the people who made foreign exchange operations, owned and managed the official foreign exchange reserves of the State.
In the piece, Caso Gürtel, as well as the investigation initiated in November 2007 by the Anti-Corruption Prosecutor and denounced by the Prosecutor's Office in February 2009 before the National Court, on a network of political corruption linked to a Spanish political party, the artist He has raised a concrete conceptual installation: a table with the final judicial ruling, 1687 pages in piles of different volumes facing the sea of Malaga, where the papers were burned until the glass burst.