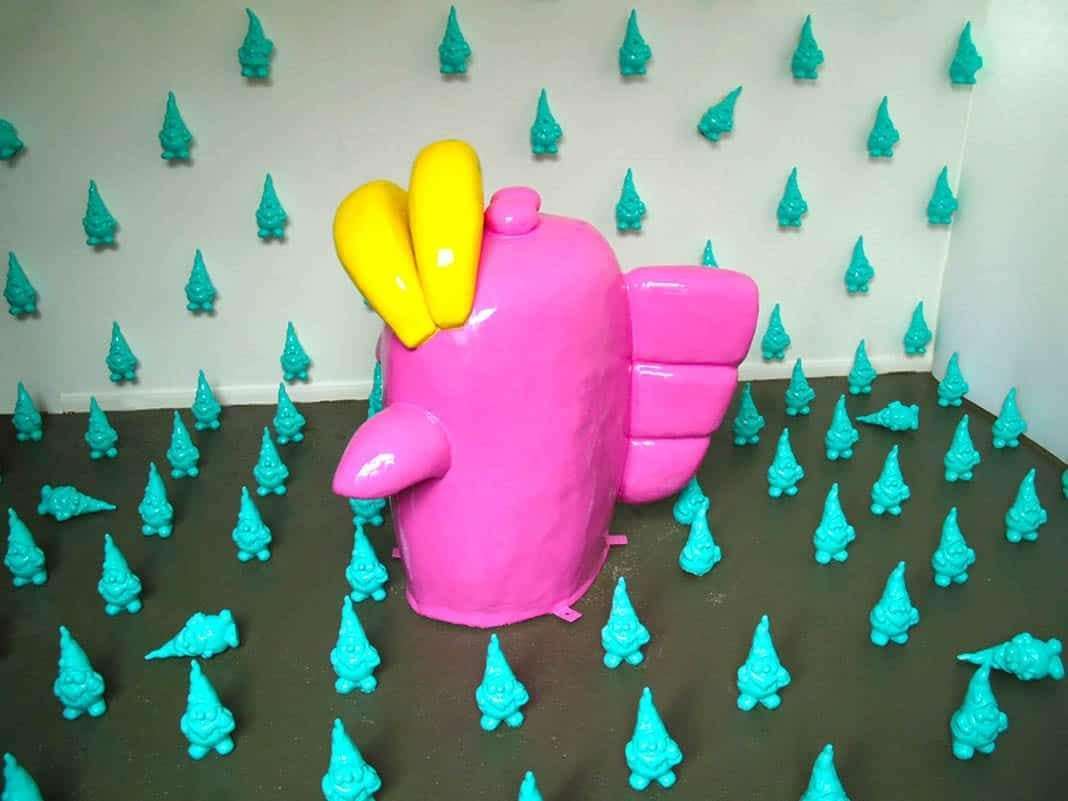 To analyse this melodramatic arrangement, I will draw from Michael Foucault’s book ‘The Order of Things’. His anthropological argument that the human categorisation strategy – how we label things – is limited. Furthermore, our use of language fails us in our emotional response to art. The Order of Things is based on the classical episteme, characterized by representation, ordering, identity and difference, giving rise to categorization and taxonomy.
In this piece, Behind the orange frame, is a fantasy reality: a railway track with hanging letters and numbers have escaped from their binaries, they jumped on a Railway track,. the bird and rabbit are desperate to enter this reality, the judge sheep guards this reality as a gatekeeper. The buddha represents the UK at the moment and highlights the hysteria Brexit tension. The two sheep doing can cans are so excited about this alternative reality that they cannot stop dancing, the Half scooter can transport this reality to anywhere. Also what is crucial here, is the element of transport: the railway track and the scooter, this is stating that these metaphors are not static and that this is a world-wide language free from classification and binaries. My intention was to create a 3D painting that would unflatten the white cube space and that would embody the spectator, and to create a painting that would give multi-dimensional views and re-arrange perception; As a global community we are fed a pre-established belief system that stops the flow of imagination. I believe in creating a space for the viewer to break away from the norm, to start imagining again. This work has been about distorting the Fine Art white cube gallery space and conventions of Painting. the white cube shape consists of squares; The square is a metaphor for measurement and is a form of standardisation. In this piece, I painted with bright colours, I discovered that meaning isn’t bound to a place, particularly in the case of colour. With colour, I can dispense with affiliations and object borders without destroying them. They remain simultaneously visible in any case, when a site is covered in paint it strongly points to itself. The site becomes newly articulated and transforms into something pictorial- the site encounter something other. My aim here was to place an emotion in a rational space, placing emotion and the rational side by side. The emotion here being the colour, the sensory and manipulating the meaning of where the colour is situated and to make us think about the conventions of painting and the rational in this case is the white cube, the square. The square is a metaphor for measurement and a form of standardisation. This piece was about our current obsession and inclination to orderly arrangement: A report just out of Yale university suggests that we have an inclination to orderly arrangement – and its corollary, a revulsion at disorder known as ‘pattern deviancy aversion’ – may indicate broader prejudice. Not just towards stuff but towards humans. According to these findings a tendency to dislike visual incongruities like a malformed pizza or incorrectly laid floor tiles and is linked with a tendency to shun people on the margins of society or from minority groups.
My intention was to create an orderly piece that will have some slight chaos and obstacles to complicate the order. The gnomes were used as a metaphor for people, the ordered gnomes were showing people following, the disordered gnomes were a metaphor for unorthodoxy, stating that you don’t need to follow. The Pink Fish was about representing the ‘other’ the fish, its oversized lips were showing oddness and the strange, the strange has to do with a fascination for the outside, for that which lies beyond standard perception, cognition and experience.
The two times that I exhibited this piece, the audience reaction was very interesting, the audience was trying to correct the disordered gnomes, they placed them standing and in order, when they had placed them in order, I sometimes as an experiment, placed them back to the original position of being not in order, which interestingly ended with confusion from the viewer. I believe a wider cultural importance happened here, I believe that this piece of work took the spectator beyond standard perception, an experience of the audience reaction was highlighting areas of cognition that highlighted an inclination to order.
In addition, bright colours have been added, which adds another layer of metaphor, how in todays culture; bright colour is classed as ugly and neutral is classified as beautiful and how in western society, colour holds certain associations, it appears the use of colour has been made evil, compared to neutrals, a grey or monochrome palette, applying colour has become to be equated with a saccharine quality, artificiality, cartoonish and naivety. Here I wanted to put to the viewer that their taste comes from their own personal preferences, and that they do not need to be influenced by cultural classifications.

Throughout her career, Marie Brenneis has developed a unique and diverse body of work that has a highly seductive emotional impact and connects profoundly with global audiences. Continuing to address the twin themes of re-arranging perception and hierarchies of classification. Working across Painting, Installation, Sculpture, Costume and Performance. Marie Brenneis born in Wigan, UK, BA in Fine Art and Photography (University of East London 2009) and an MA in Choreography and Dance Theatre (Trinity Laban Conservatoire, London 2010). Her work has been exhibited at Get Living London, World of Co -Bulgaria, Pad Depot -Mainz, Germany, Hackney Wicked Arts Festival, V&A, London, Aesthetica Art Prize, York, London Architecture Festival. The National Gallery in Prague.