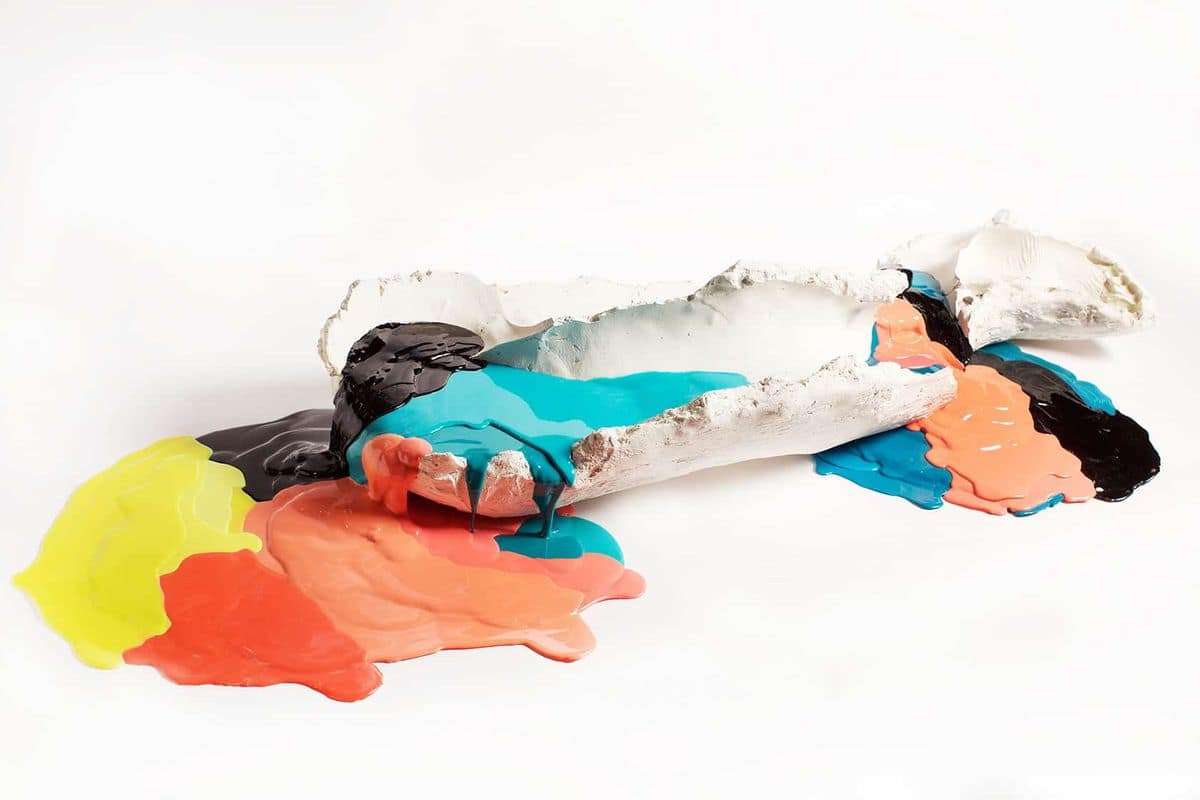 “The globe of this earth is not just a machine, but also an organized body, as it has a regenerative power” – James Hutton, 1788

The five-channel video installation entitled “Dust” is the new work of a well-known Russian artist Maria Agureeva (b. 1985), whose practice in the course of 2010s has been determined by her interest in the bodily domain, its ambivalent images and affects, traces and imprints, its social status and metaphoric potential.

Confidently migrating from one material and technical environment to another (from painting and photography to ceramics, plaster, latex, synthetic resins, video and performance), Agureeva has developed a personal, idiosyncratic formal language – visually appealing and subtly provocative, – focusing our attention on the material, sensual and, at the same time, alchemically unstable nature of creative activity. Her receptiveness to various materials, surfaces and textures, both natural and artificial, her use of pure color as an emotional trigger, the strange, exciting shape of her objects, poised between naturalism and abstraction, – all of these features organically reflect themselves in the iconographic dimension, filled as it is with anxious hints and associations.

Unfolding itself on five screens of different format, “Dust” may be seen as Agureeva’s programmatic statement, which brings together many of her key ideas and quite consciously erases the borders between documentary film, performance and play. Positioning herself in a laboratory situation of “the artist at work”, for almost an hour she demonstrates in a multi-angle perspective the painstaking, ritualized process of producing and perfecting an art object. From the initial stage – a plaster cast of her own knee – she proceeds to the making of a positive form in pink plastic, and then loses herself in its obsessive polishing. Rhythmically cutting away more and more from the surface of the object, erasing all possible “fails“, idealizing, smoothing and “making it look better,” she quite logically arrives at its annihilation in the state of complete dispersion and nothingness.

Dressed in a pure white uniform-dress, the artist engages in a struggle with an element of the world of things, a beautiful splinter that maintains an immediate indexical connection to her body. Subjecting the sculptural object to the polishing apparatus, she methodically transforms it into colored dust, which is spreading all over and settling on the table, touching her hands, trembling and grouping itself into curious, quasi-organic patterns, meditatively shown in close-up on one of the screens.

For Agureeva, the constantly polished object not only acts as a metonymic symbol of a certain human body that found itself under the destructive power of self-design – a kind of cult that dominates the global society and forcefully calls for each of us to change, to deny our imperfections and become someone else in the search of a true identity. Equally important for the artist is the gaze aimed at herself – the protagonist of the video who is focused on her body (the making of the cast as a point of reference is telling), on her work and her goal. It is a picture of a protagonist of an atomized world where reality comes down to personal experience and personal achievement, and limits itself exclusively to individual sensations. In its turn, the painted dust – flying over and then forming new and unexpected microforms, is capable of reminding one about the impersonal universality of matter (to which plastic, pigment, plaster and flesh all belong) – not self-contained and mechanical, but liberated and eternally regenerated.

I combine two materials in this series, which work on the contrast with each other; such materials as latex and synthetic plastic are used. Natural latex
represents something living, moving and soft, whereas synthetic plastic is like a beautiful armor with absolutely artificial, but extremely attractive surface,
which fascinates and keeps the attention on itself, but it binds the living matter, depriving it of life. These processes are a metaphor of self design as an
integral part of our endless and pointless attempts to improve our own bodies. The self design which has become a modern form of religion. This beautiful
plastic frame binds and creates unnatural shell which grows into the body throughout life and becomes its part but kills everything natural in the body.
Beautiful glossy cover attracts attention but distracts from the fact that it is only an attractive cover. These are human body parts casts. Concrete casts retain the entire surface of human skin, they are also covered with colored plastic. Here I continued to work
with the theme of Self design. I show how the body becomes a hybrid space where materiality of flesh is connected with an
individual consciousness and identity. It is driven by the desire to change ourselves to escape social pressure, but also by the desire to find our true shape and
genuine content.