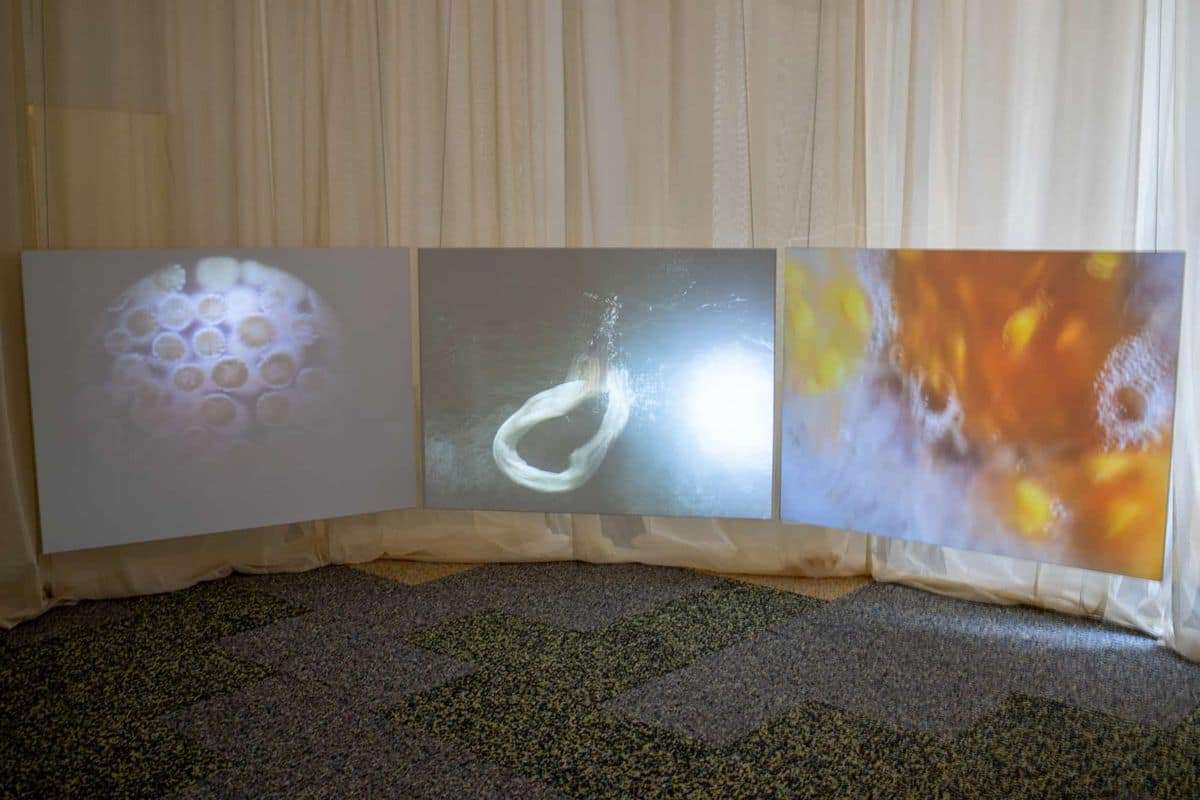 A cinema/chapel installation housing a 3-channel film screening several times daily. The work is a culmination of my research into legacies of haptic feminist cinema in relation to climate change and ‘solastalgia’ as ecological mourning. It takes form via mother/daughter skype conversations, attempts to unravel mythologies, alternative moon-birth scenarios and dance conjuring. Authorial slippages and transference course through the multi-perspective and multi-vocal film. Over the course of several months, shooting Super 8 and phone footage in the US, Brazil, and the Netherlands, I created this work in collaboration with artists Kim Hyeisoo, Allie Armstong, Naomi Hattler, Alejandra Lopez, Zewiditu Jewel, and my mother, Colleen Cordes.

A single channel film, The Taste Undid Our Eyes! is a separate work that lives beyond the installation, OPTICAL? ORALITY? ORACLE! and screens in a more traditional cinematic setting. Over the course of several months, shooting Super 8 and phone footage in the US, Brazil, and the Netherlands, I created this work in collaboration with artists Kim Hyeisoo, Allie Armstong, Naomi Hattler, Alejandra Lopez, Zewiditu Jewel, and my mother, Colleen Cordes. Most of the dialogue between us was over email and text messages, as we corresponded about dreams of feminist moving image making and excitement over ancient Greek rituals, new scientific theories about how the moon was created, and climate change fears. I worked with Argentinian editor, Stephanie Sibbald and Dutch filmmaker Wim van Egmond who generously allowed me to utilize his 16mm original Microbe Footage (ARTIS).

This is a current work in progress. I am collaborating with fellow artist, Washington DC based poet, Zewiditu Jewel, on a video relating to the disappearance of Assateague Beach, an island in the state of Maryland off the eastern coast of the United States. We both grew up going to the beach and protected nature preserve where a large band of wild ponies have lived for several hundred years. The island swampland and beach area are disappearing due to rising sea level and more furious storms. The footage is shot on Super 8 and the vocal tracks are poem readings by Zewiditu Jewel (who also appears in some of the footage).

Lucy Cordes Engelman works with moving image in relationship to water and climate change. Interested in the potentials residing in a more sensuous, sensorial cinema, she creates hybrids work that can be considered spatial, fictional and filmic. Lucy grew up digging in streams and getting lost in the woods outside Washington DC. Her parents were environmental journalists, and she studied theater at the public arts highschool, Duke Ellington School of the Arts. She graduated from Oberlin College (US) with a BA in Visual Art / Experimental Film. After working as an actress and filmmaker in Los Angeles for several years, she moved to the Netherlands to pursue a degree Artistic Research at the Royal Academy of Art in Den Haag. She is currently in the Advanced Master’s of Art and Design with a social – political context at Sint Lucas in Antwerp. Her work has screened in the US, Iceland, Latvia and the Netherlands and she is currently based in Rotterdam.