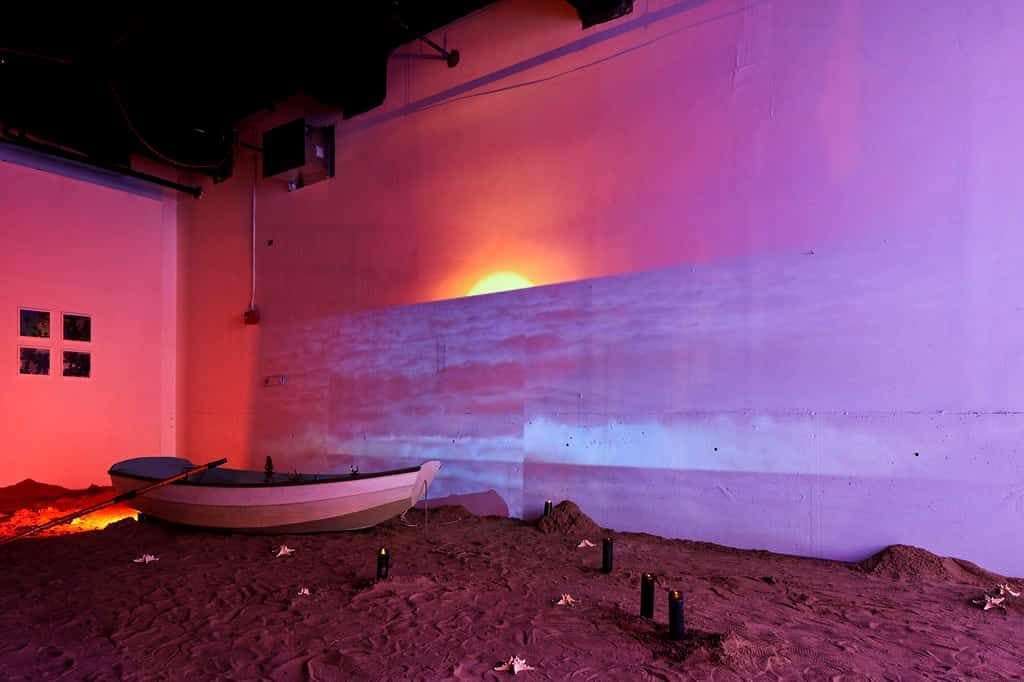 Entre Nosotros (Between Us) Variation II, is an audio-visual and interactive, recreating the illusion of a beach environment stuck in time, wrapped around in an indoor space, using video projections, sounds, lights, a floor covered in sand and a scattered objects that reminds us of the contradictions of space, culture and rituals that take place in the edge where the land and ocean meet. 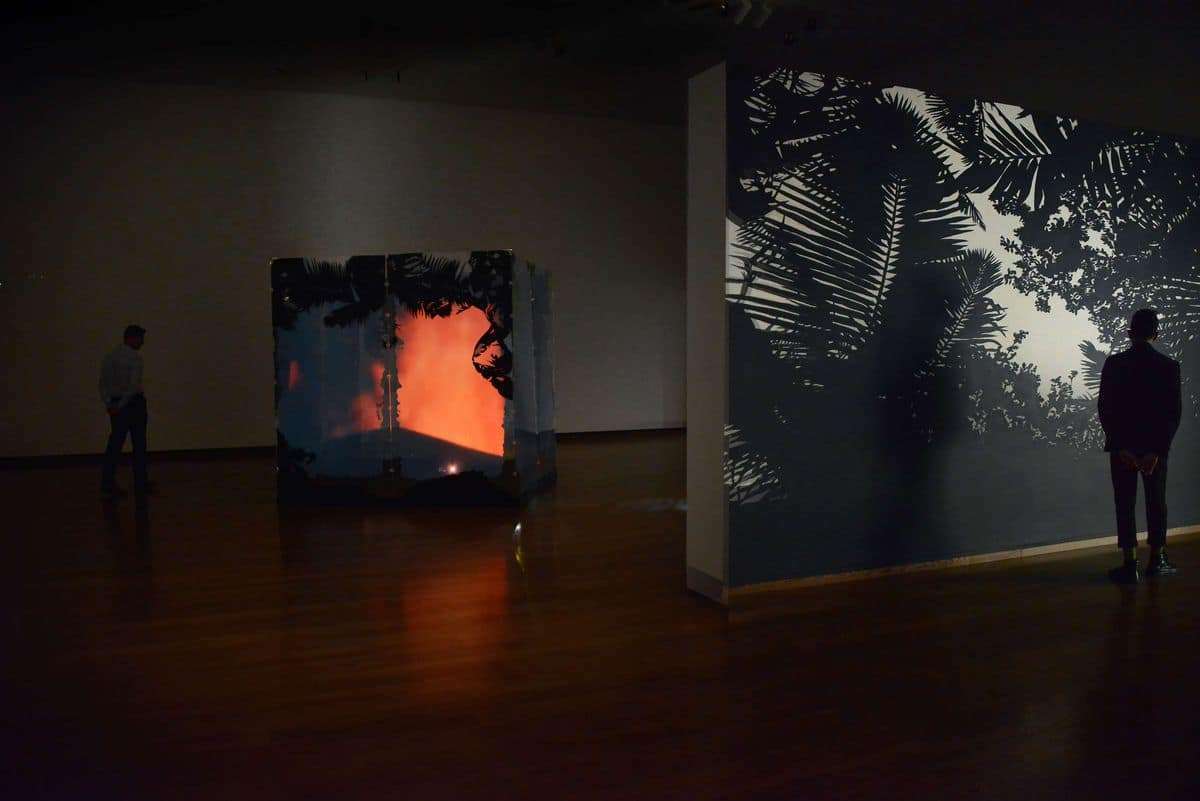 At The End of Daybreak, is hand painted mural of a shaded tropical vegetation and an audiovisual installation on a translucent life size cube in the middle of the gallery space. The installation evokes the time of the ‘daybreak’ -the beginning of a new day or dawn- Inside the cube, moving images of a volcano erupting and lava are constantly reproduced and a voice narrates out loud a section from the book Cahier d’un retour au pays natal form Aimé Cesaire that recalls for an awakening, a rally, and expresses metaphors with nature itself in the Caribbean postcolonial time. 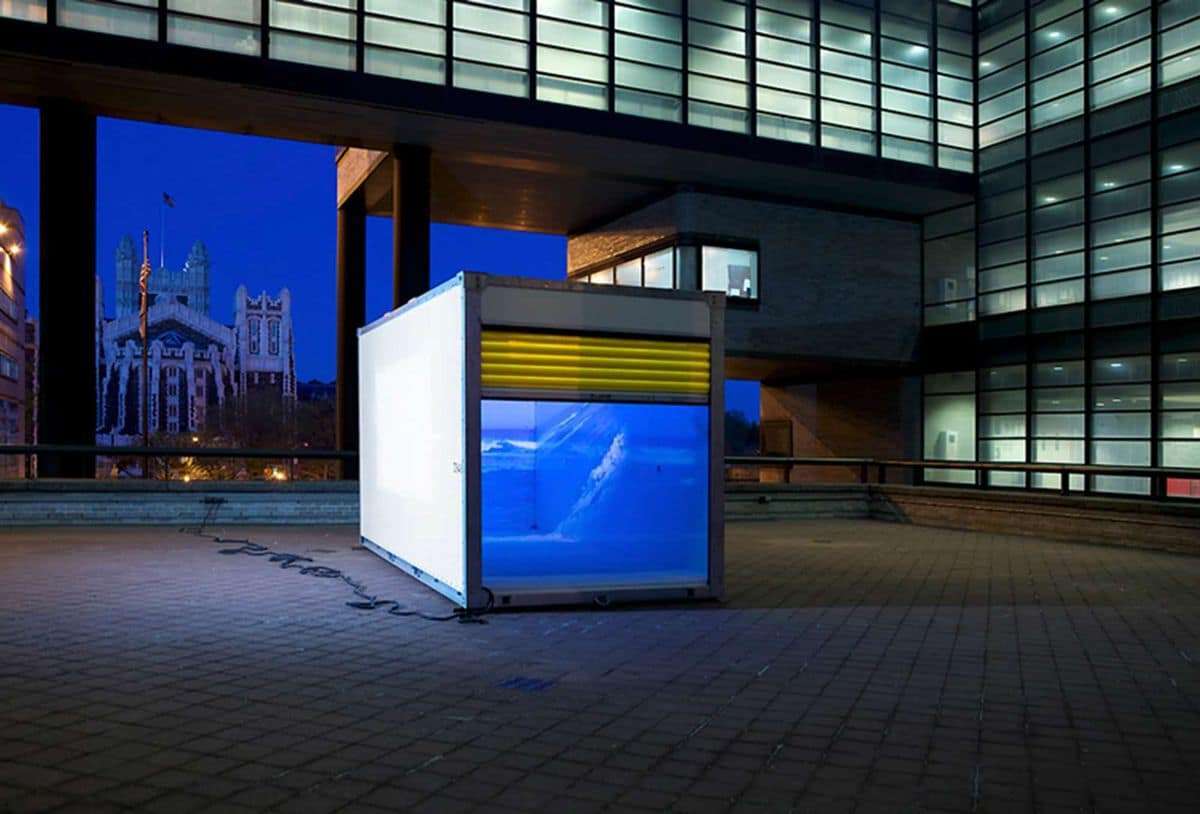 Intangible Space is the result of an artistic research on the concept of the cloud, used as a metaphor to describe a complex system of interconnected networks of digital storage. For this project I convert a mobile storage container into a life-sized installation, with an immersive interior environment that retrieves a digital images of clouds and its metadata through narrative sound. The container is a reflection of a place where memories and belongings are contained, transfer and in transit. All the images were previously collected via email and social media, coming from acquaintances and friends from across the world.

Lionel Cruet born in San Juan, Puerto Rico, lives and works in New York City and San Juan. Cruet received a Bachelor in Fine Arts from La Escuela de Artes Plásticas en Puerto Rico and a Master in Fine Arts from CUNY – The City College of New York, and Masters in Education from College of Saint Rose; was the recipient of the Juan Downey Audiovisual Award in 2013 at the 11th Media Arts Biennale at the National Museum of Fine Arts in Santiago, Chile.
Cruet’s artworks have been included in exhibitions at the Bronx Museum of the Arts (2017); Everson Museum of Art, Syracuse (2017); Museo del Barrio, New York (2013), Museo de Arte Contemporáneo de Puerto Rico (2013); and Universidad de Sagrado Corazón, Puerto Rico (2014); and a solo exhibition at the Bronx River Art Center (2015) and have been reviewed Made in Mind Magazine, designboom, Daily Serving California College of the Arts, and Latinx Spaces. Cruet works multiple nonprofits that promote art and aesthetic education for immigrant youth.