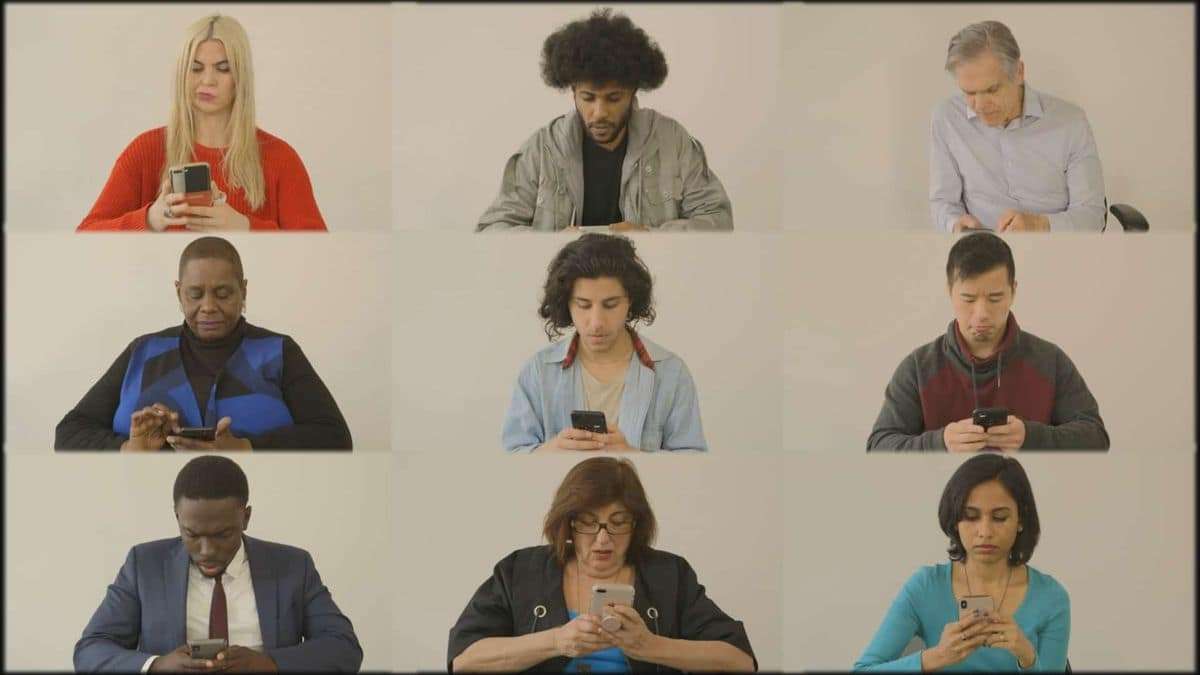 Partly inspired by Bruce Nauman’s “Please Pay Attention Please,” and reimagining it for the Internet age, PLEASE PAY ATTENTION explores the tension between our newest commodity, attention, and the “context collapse” in meaning that occurs on digital screens.

A principle of modern economics is that human attention is itself a fungible commodity, as valuable as oil or electricity. Thus, people try to garner the attention of strangers as a means of earning income and status. Like all commodities, attention becomes more valuable as it grows scarce. Attention deficit disorders continue to rise. But what do we with the attention we receive, and the attention we give away?

Commune: (1) to communicate intensely. (2) The smallest community unit in many European countries.

In Commune, a grid of nine people communicates with the viewer non-verbally while interacting with others via their smartphones. They are at once together yet separate, intense but removed, expressive yet occluded, connected to us and to the unseen people they interact with, yet also separated by the same technologies (video and smartphones) that facilitate this communication. Their arrangement and body language, as their collective gaze focuses downward to the texts they read while also projecting their thoughts into the ether, is reminiscent of a church choir with their hymnals.

“Foundation and Empire” suspends $1,000, in the form of 10 x $100 bills, in a block of ice and records a time lapse of it melting. The cotton and linen paper of the currency traps heat more efficiently than the surrounding ice or air, causing the money to have a direct, observable impact on its frozen surroundings, just as the impacts of climate change are most notable in the arctic. The more that the cash becomes exposed and warms, the more it warps the ice, until the entire structure becomes unsustainable. The sum of $1,000 was chosen as the smallest “large sum” of money that most people can envision, making it easier to extrapolate into the vast sums listed above.

Kevin R. Frech (USA, New York) is an internationally exhibited artist and award-winning filmmaker whose work explores the interaction and impact of people on their environment, and vice-versa. His recent video work, “The Minimum,” which gamifies labor at the American minimum wage, won a prize at Arte Laguna 2019 in Venice Italy, and was shown at ART NOVA 100 in Beijing. It also won 2nd prize in the 2017 YICCA International Contest of Contemporary Art, Rome, Italy. His video work, “TWO DEGREES (Global Warming Series)” is currently on display at the Storefront for Culture in Seattle, WA. Kevin’s debut documentary, “Not Like in the Movies,” chronicled the lives of artists living with schizophrenia in New York’s state mental institutions. With “Bowery Dish,” his next documentary, he showed the gentrification of NY’s notorious Bowery. He holds a BFA from the School of the Art Institute of Chicago, and did graduate studies in film at Tisch School of the Arts at New York University.