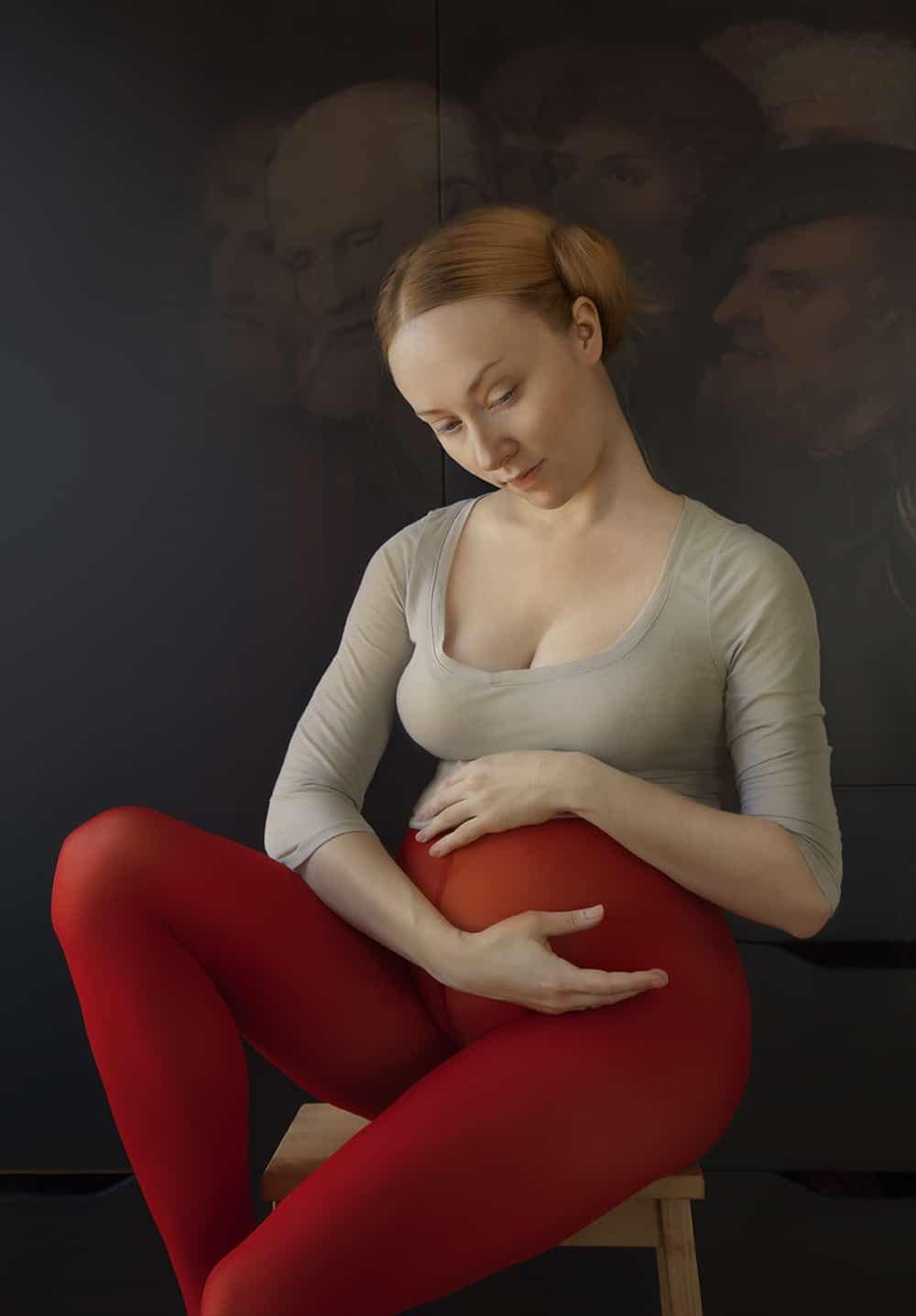 The main theme of the work is a pregnant woman sitting down. The title refers to the biblical story in which Christ protects a woman who is accused of adultery from her attackers, and confronts them with the imperfect nature of every human being. This puts the supposed sin in perspective and turns the fact into a universally human quality. This capacity is reinforced in Belkina’s work by the serene atmosphere and elegance the woman exudes; she protectively holds her pregnant belly in her hands as if she were holding the globe itself. The weight of the concept of sin is lifted and it becomes an intimate, innately human quality. At the same time the new life carried by the woman is still unspoilt and without sin; a blank canvas that will carry the traces of the choices made throughout the life of this new human being. In this way, the pregnant woman, modelled by Belkina herself, symbolises the ever renewing cycle of life, perfecting the imperfect nature of existence time and again.
For this work Katerina Belkina was inspired by a painting by the famous German renaissance artist Lucas Cranach the Younger, called Christ and the adulteress (After 1532) from the collection of the Hermitage museum in Saint Petersburg. By choosing a 16th century painting as an inspiration she once more tried to make a connection: a connection between past and present. She links the predominantly religious nature of the work of the Old Master to a contemporary, secular society in which she considers the concepts of sin and judgement more relevant than ever. In Entreaty, we again see in pregnant woman. She is standing, till below the waistline, en profil as in an early renaissance female portrait. Her expression is somewhat introverted. The image is framed by a window, through which we can see an atmospheric sky above the vague contours of a city. The red clothing she wears leaves her pregnant belly uncovered and with her left hand she makes an explicit gesture that can point to a request; the title of the work, Entreaty, a ‘plea’ or ‘request’ coincide. Striking is her appearance, she has make up on, wears lipstick and is carefully modelled.
To Belkina the creation of new life is a happening that leaves nobody indifferent, and that calls for mixed emotions. Joy but also anxiety. The fear for the unknown and a feeling of loss. The loss of a seemingly unbreakable bond and the loss of a state of being that preceded. The exclusive mission of motherhood places the woman in a position of loneliness and caring. On the one hand this is a particular emotion, on the other hand this is a universally given state. Belkina’s choice for this representation of the en profil portrait from the fifteenth century early renaissance, confirms this duality. The en profil depiction of a person refers to both a general applicable portrayal of a person, remember the portrayal of royalty on coins, as to a specific individual. The tension between these two qualities is depicted in the less confronting en profil – rendition then the frontal portrayal of a person.
In this sense the expecting mother shows herself both introverted, directed inside, as conscious to her larger surroundings, the world outside herself. Belkina translates this double attitude in the appearance of the woman that is more worldly then intimate and in the somewhat deformed window in front of which she poses.
The title of the work, Entreaty, suggests both. A plea for consolation and support in such a personal state of existential transition in which a woman finds herself in her, in many ways, frail state.

This is my body. I accept it the way it is. My appearance is a key to my destiny. While changing our appearance, we change our essence. Our perception of the parts of our bodies is biased. We see them separately, as fragments. Each our fragment has its mission, but we forget that they represent a single whole. The same is true about us. Each of us, fulfilling his own mission, belongs to the entity of the Universe. My hieroglyph is a key to the discovery of a new vision, expressed in the acceptance of our external code rather than in fighting it. My autograph. The installation was inspired by da Vinci’s Vitruvian Man, revealing the perfection in the human proportions and acting as an implicit symbol of internal symmetry of the human body and, further on, of the Universe as a whole.

Early on Katerina Belkina knew about her exceptional talent to see the world through different eyes. Born in Samara in the southeast of European Russia, she was brought up in an creative atmosphere by her mother, a visual artist. Her education as painter at the Art Academy and from 2000 at the school for Photography of Michael Musorin in Samara gave her the tools to visualize her ideas. Exhibitions of her sublime, mystic self-portraits ensued in Moscow and Paris. In 2007 Katerina Belkina was nominated for the prestigious Kandinsky Prize (comparable to the British Turner Price) in Moscow. Recently she got the Hasselblad Masters Prize. Currently she lives and works in Berlin.