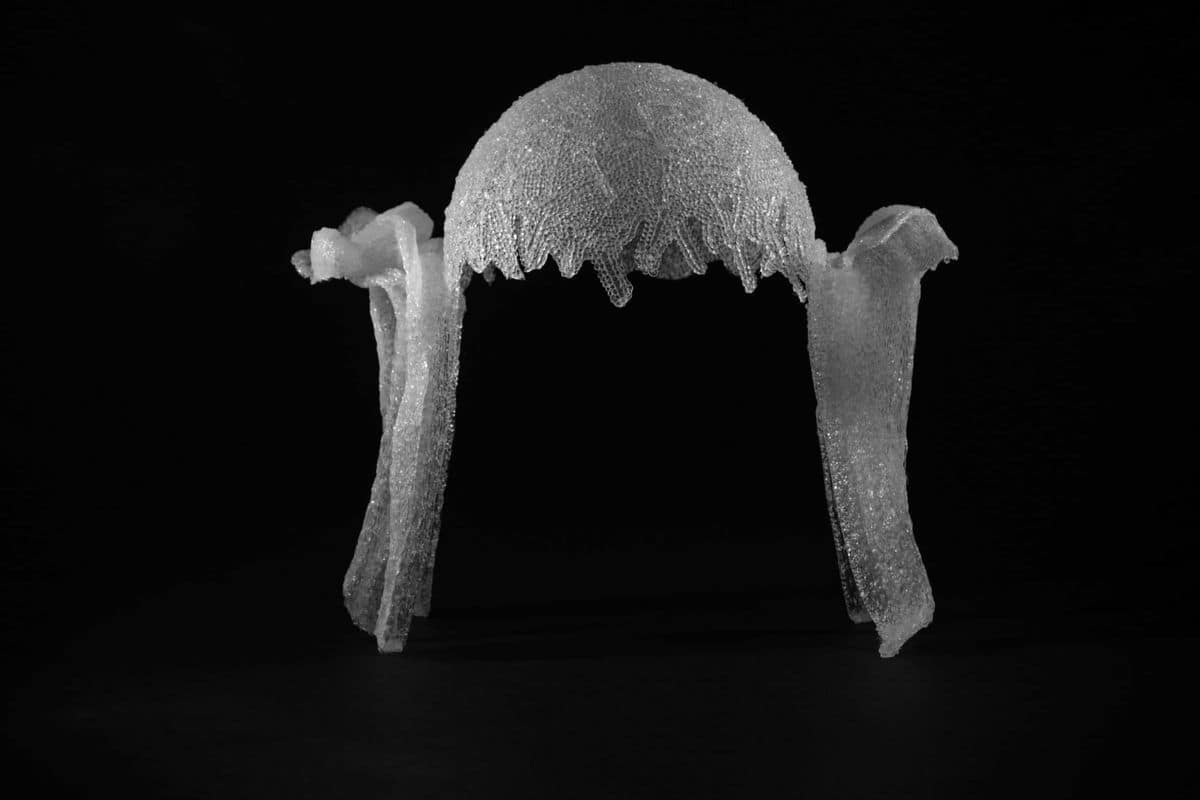 I am very much interested in organic structures and the way ‘freakish’ motives and patterns are build in natural environments. In a series of ‘Cell plastoid’ sculptures I investigate transparent membrane cell tissues, and my abilities to find forms that stay as light as possible. This sculpture is build from thousands of little drops of PLA, (polylactide, a thermoplastic bioplastic material), in a one drop thick membrane. It is hand build with the use of a 3D pen. PLA is a material commonly used in 3D printing, but it is a fascinating material to use without the help of a computer or 3D printer! One of my goals in my work is trying to create artificial nature experiences.

Fundamentum Plastoid is the largest sculpture I made up till now, with its 8 by 2,5 meters. It is entirely made with the use of a common ”glue gun” and LED light. This so called glue is in fact a thermoplastic material, which I use often to build organic structures. I build it ‘in situ’ in about 10 working periods between 2017 and 2019.

The sculpture is situated right under the local paintshop ‘Schrader’, in the German city of Einbeck, in an ancient basement. It is a centuries old storing place, with a beautifully curved ceiling. On this inspirational and timeless spot I wanted to build organisms that seem to be very old but also alive. They have a fungi, anemone or deep ocean organism like feeling.

The LED light is permanent, has a life span of about 50.000 hours and will die after that. The sculpture will then face a change of appearance, it will somehow die.

The Vertical Builder is a vertical metal installation on which I build sculptures called ‘Turrims’. By turning the base platform by hand and applying small amounts of thermoplastic, layer over layer, a structure is build over time. This process I often perform as a performance in which the public will turn the base while I will build the sculpture. Everybody who helps is registrated and connected to the work.

A Turrim is a sculpture in which the organic forms are devined by the faults I make with my hand and arm, while applying the thermoplastic layers. Sometimes my hand makes uncontrolled movements that result in erratic or disharmonic parts, which then will be the beginning of enlargements of these faults. Over time amazing whimsical organic forms develop.

I studied free art at ARTez art academie in Arnhem (NL) from 1985 till 1988. Right after that a couple of video projects came about, like the documentary film ‘Novikollektivizim’, which was about the NSK art collective in Ljubljana. From 1988 till 1998 I have been working on a series of paintings and assemblages about environmentalism, as a means to bend frustration coming out of street action. Around the year 2000 I began ‘Fragmented City Archive’, a photo archive project in which I collected ‘orphanaged street impressions’. From 2013 up till now I am very much connected to research into erratic phenomena in nature and physics. Installations, sculpture, video and photography are used to sketch this fascination.