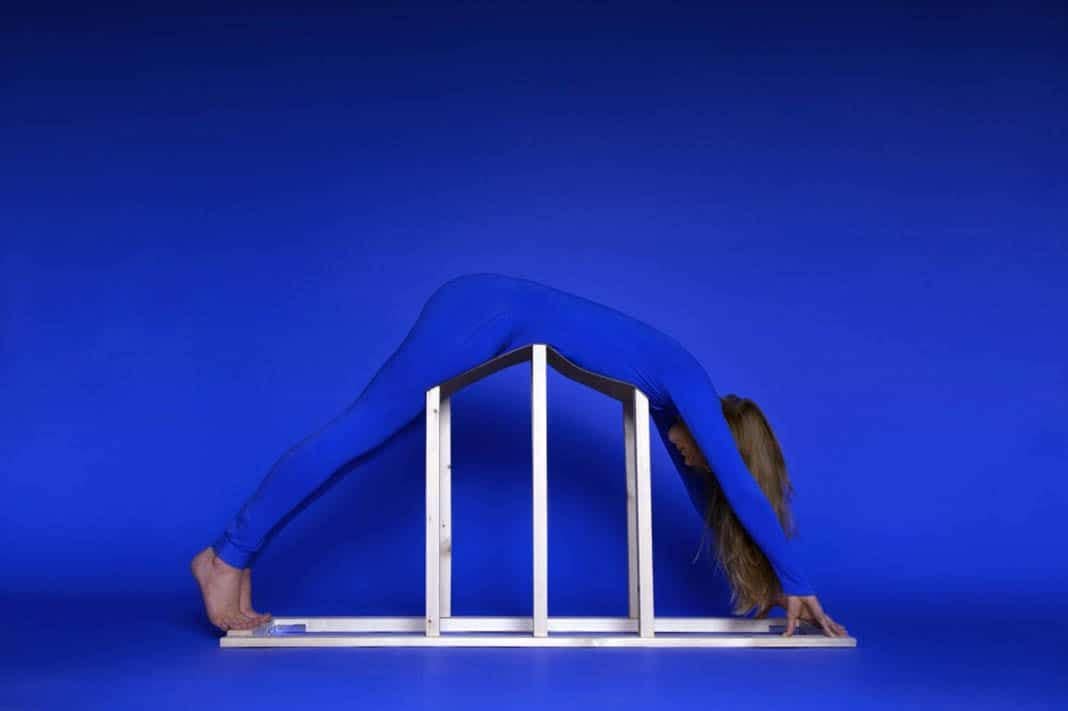 Studio photograph depicting a girl who arches on a wooden structure. She visually resembles the ancient Egyptian goddess Nut, who was portrayed as a woman stretched on the tips of her toes and fingers with a star-covered body. She embodied the heavens, protected the dead and was regarded as a barrier separating the forces of chaos from the ordered cosmos in the world. It is interesting that the man had always had the need to transpose the unfathomable vastness of the universe to the human scale.

The choreography is based on the so-called Chladni figures – a physical phenomenon discovered in late baroque. In the middle of the Colloredo-Mansfeld Palace ballroom, an ob- ject made of special stands upon which these figures are to be manifested is being gradually formed. A group of players, mu- sicians, build individual layers of the object from the outer circumference toward the room’s center, from the lowest stands forming a kind of base up to the highest ones, and put the plates placed on top of the stands into vibration by drawing violin bows along the plates’ edges in a kind of orchestral mode, whereby fine flower dust spread on the plates forms regular figures that emerge and change depending on the plate’s size and shape, and the vibrations’ frequency. The last figure is created on the high stand placed under the monumental chandelier. The player must ascend a few steps to reach the plate and “play” the figure, visible only from above. A person on the balcony over whose shoulder we watch the scene is observing the whole event, while it is not defined whether he or she is involved, supervising, determining, or just present.

The video projection Beyond Control presents an ironic view on urban planning, reversing its rules in order to create a space for chance and unexpected solutions. The builder is blindfolded and is constructing a plan for a fictive city, the major sources for the construction being memory and intuition. The typical rationality and foreknowledge of urban planning is therefore left behind, together with the need for control. The structure arising is variable, irrational and unbound.

Born 1984, live and work in Prague, Czech Republic Jan Pfeiffer has mastered various media, indulging in video, photography, animation and drawing. Pfeiffer combines an analytical melancholy over historical, political and sociocultural phenomena and a genuine fascination by mythological and religious symbolism. However, the artist does not choose his material according to its relevance in the historiographic discourse. He is primarily interested in the sometimes hardly perceptible mechanisms and connotations that co-create or surround the given historical or social moments. Or, on the contrary, he explores the given mechanisms and connotations as results of a moment of initiation which triggers a historical or social movement. The language employed by Pfeiffer to narrate the eclectic stor