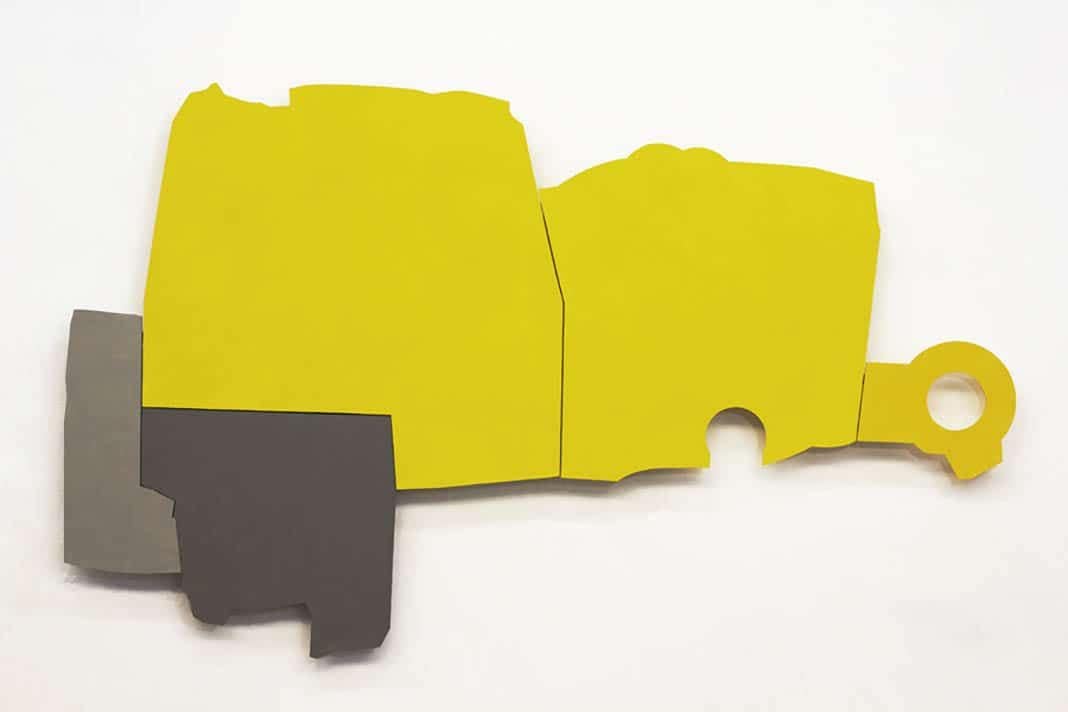 The first Reliefs were created for the project L’Art Renouvelle le Lycée 2012, organised by the Passage de l’Art gallery. ARL theme – an opposition between excess and limitation – is present in my work by questioning the border between painting and spatial objects.
In Reliefs I take up the theme by crossing bi-dimentional image limits and by opening them to other dimensions.

At first I replaced the usual base of my paintings (canvas on frame) by a woodboard. Next I literally deepened the dissociation of the background and and the form of my images, cutting out the form from the background and hanging it eight centimeters from the wall.
The forms hover on the wall which becomes the new background. It is a work on the border between painting and sculpture.

The relationship between the plane form and the volume is very important during the phase of cutting the forms from paper, essential to the creation of my works, both pictorial and spatial, resulting from an intuitive need to experience space.
Eduardo Chillida’s Gravitations are meeting points between the artist’s graphics and sculptures.

The common ground between my paintings on canvas and my objects is a balance between a still recognisable motif and pure plastic form, the creation of space from bi-dimensional elements, the mutually interpenetrating planes, the relation of forms to the picture space.
The play of colours and contrasts create different planes and depth.

These plastic events are above all formal, although something of the figurative remains in them.
The starting point of an abstract form very often comes from figurative forms, brought on by everyday reality. I am convinced that a real abstraction does not exist beyond of the idea of abstraction. More than abstraction, I am interested in the oddity of the received form, the multiplicity of senses which it evokes.

Chance plays an important part in my work. At the begginning I have a very general idea of what I want to do. I start by putting some pieces of paper on the floor and I observe what happens. Often the proces is long. If I am perceptive, sometimes something happens. The image lets itself be followed and, slowly something appears.
In my most recent spatial works, I introduce the space (the emptiness) into the matter (the fullness), searching for balance in reference to Eduardo Chillida. This process optically lightens the composition so that the elements appear like fragments of a larger whole, the empty made visible.

The wooden elements are bolted by small metal hinges and screws. The hinges have got a few functions. They connect elements simultaneously keeping between them a fine separation line. This line, as well as the forms’ borders function as a drawing.
Apart from the possibility of real movement ( part folding of elements), hinges introduce an idea of movement, imaginary and much more vast into the piece. This possibility of movement present in reliefs, corresponds to the transparency effects, also illusory, in paintings on canvas.

The coexistence of these two kinds of work suggests a questionning of the nature of space, between physical and mental space. Each approach describes a strange point of it, difficult to situate, through a dialogue between the bidimensional image and tridimentional space on the one hand and on the other hand these same elements only in their opposing direction.