It’s a series of network installations made of tights and originally based on a recycling idea (old tights with ladders), reflecting the development of the globalization and world wide web, which is connecting the entire globe. Tights are very representative for the fast consume of cloths, because they mostly only stay well for a night before they are going to break (in the 1960s/70s tights were still brought to a shop for repairing the ladders!). The textile network of tights finally is comparable to a vulnerable organism that could collapse. It is alienating the surrounding and looks like an extra-terrestrial sculpture complex. Since 2006 ‘intervention invading network’ had been shown in several European and overseas exhibitions. Destructive elements always had been a fascination for mankind. If you regard for example atomic explosions, demolition of buildings, blasts, thunderstorms, volcanic eruptions, geysers, avalanches, icy rains, hale, tsunamis or tornados, the images created by this powerful violence always have their own aesthetic and beauty.
But there are also some very small silent microcosmic and thus invisible elements, which are looking quite beautiful under a microscope, but are able to kill millions of human beings – the viruses.
Due to the globalization and the increasing aerial traffic, epidemies can be spread out all over the world and become a pandemic quite quickly. The last waves of epidemies showed us that we almost can’t preview the development of the further movements and mutations of the viruses.
What I’d like to show is the beauty and variety of these tiny killers, shown by an installation of a simple metal bed with different designed viruses. 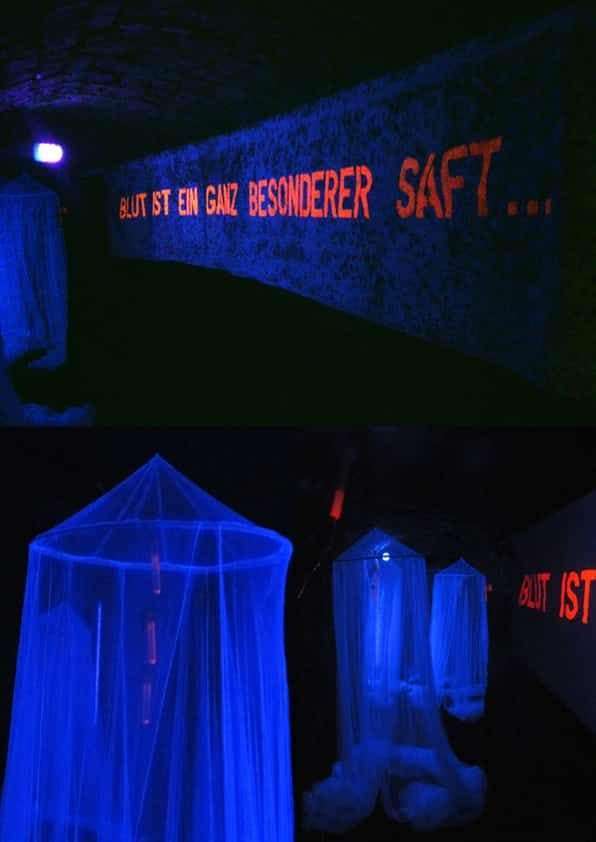 The mosquito has been on the move, especially in recent years, because its search for a new home is by no means limited to the human species. Due to the constantly growing ‘migration of peoples’ in global air traffic and the global warming caused by this, among other things, changes are slowly but surely taking place in the settlement of new flora and fauna in our regions, either through gradual advance or involuntary travel by plane. A current example, and one that is currently under discussion everywhere, is the tiger mosquito, because not only malaria is a problem, but also dengue fever, which has a rather deadly potential and with which the Atlantic island of Madeira, which belongs to Portugal, has been struggling for some time.
A scenario which is not at all far-fetched in this respect, and which is equally worrying, would be the arrival of the malaria-transmitting Anopheles mosquito in Central-European regions, especially those with a high water content.