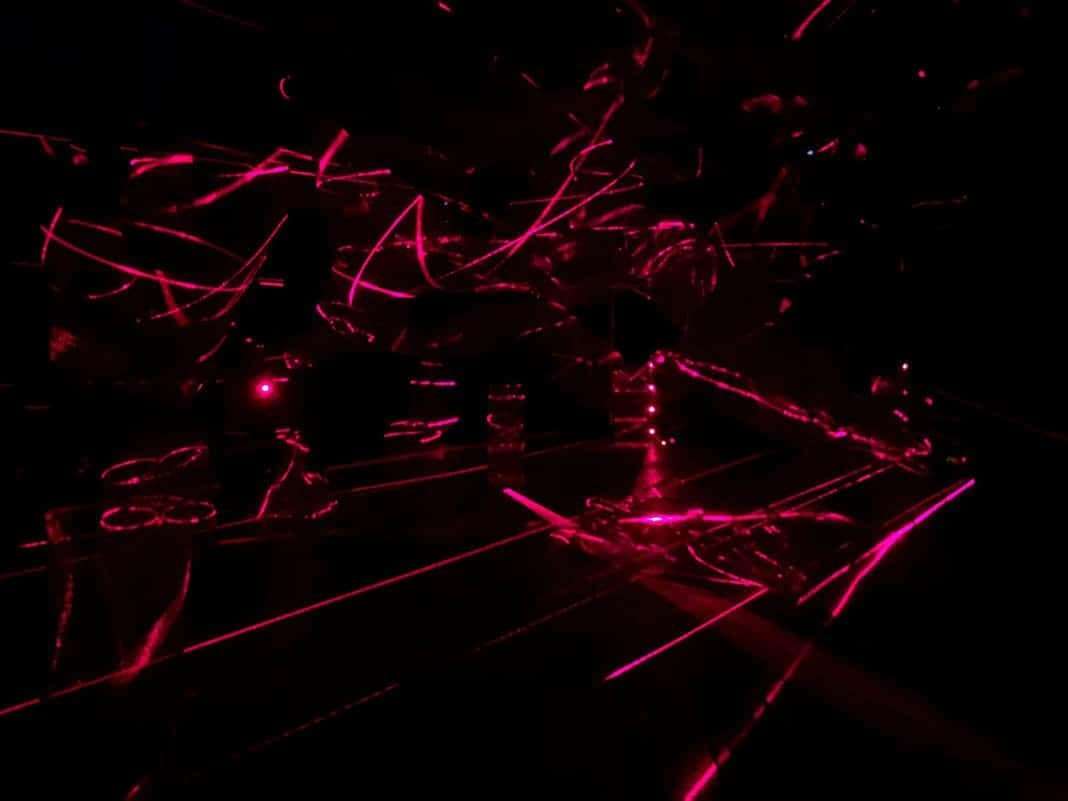 Showing a single lighting plane in darkness space,let the viewer’s senses pushed to strange place.(The light source of projector be completely hidden by the spatial perspective.So the only light can be seen by viewer is all happening on the moving and oting paper.)

Because of technological progress, access to information is no longer difficult.
Although paper media is still one of the means of information circulation, in this time, electronic devices have gradually replaced the channels we used to receive information.
The relationship between people is also squashed in the same dimension by these messages of mutual publicity. As the soul travels quickly around, the body’s physical properties are gradually disappearing as paper media in the process.

This work is based on this phenomenon, trying to use the installation to re-discuss ‘’what is the ture body’s senses’’in this information explosion era. The three-dimensional space which human beings is composed of infinite point、line and plane.In “Nomadic” series, try to push the viewer’s senses to a strange place by creating helf-transparent organic objects and using multiple light sources to simply reflecting its section lines in the darkness space.

With the involvement of the media, the realities and the realities of space will be reconstructed by revealing and implying all the exist lines in space. Viewers can re-explore and redefine their own imagination in the darkness space by moving around. [Ultra] is a spectacular large-sized light installation series.
The intention of this series is to change viewer’s measurement perception of him/herself and the surroundings with the visual experience the installation provides. [Ultra Line] is a floating physical light beam pointed to the sky.
Actions correspond to relative actions taken place in the environment, and consequently a visual experience of artificial lightning would be created.
(The length of the line in this version is 30 metres.)

Born in Belgium, 1990. Currently based in Taipei, Taiwan. Graduated from the Department of Architecture, Shih Chien University, currently pursuing MA degree in the Department of New Media Art at Taipei National University of the Arts. Interactive artworks focus on the integration of sculpture, light, and indoor/outdoor space. Specialize in integrating and contextualizing multiple media within diverse spaces; concentrate on creating exceptional sensual experiences. The intention of recent works is to introduce the potential of installation works to reshape or highlight the characteristics of certain environments, to recover the lost sensual potency in the digital era, and to inspire one’s senses toward surrounding environment.