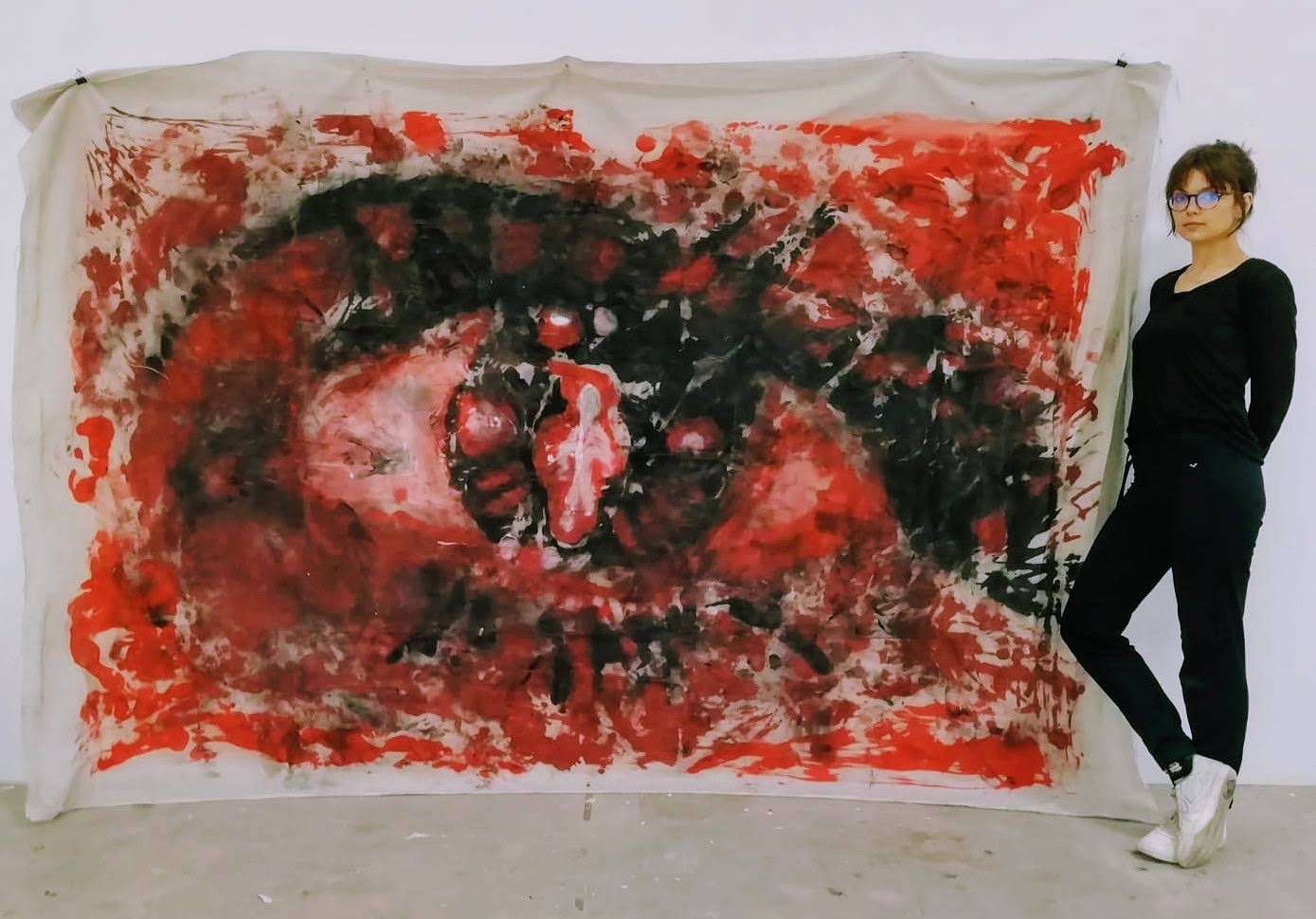 300X200CM. ACRYLIC ON RAW LINEN CANVAS.
Camouflage is about blurring the "edges" between the object (subject) and the background (context). Its a survival mechanism, used to protect or attack, and practiced in all levels of life. In cultural camouflage one has to identify these "sharp edges" (which are not accepted as normal),and obscure them by adapting characteristics of the environment.

who is looking at who?
the eye that is depicted in the painting suggests feelings of fear or rage, passion, or danger..
Who is the attacker and who is the victim?
does the eye belong to a creature in danger, hiding, fearful for his life.. watching the potential threat?
or perhaps the eye belongs to the preditor, and the creature reflected in the pupil is the one who's about to become a victim?

continuation from previous image >>>> Camouflage can be dangerous, not only to the surroundings but to the object, because when camouflage progresses for a long period of time, the subject forgets who he is on his own. My aim is to achieve the result of a camouflage (because it is necessary for survival) but without having to obscure who I am. Instead of being a passive subject, I become an active one by forcing my features on the background. The result is two things merged into one. Subject and Context are now one object. My work and I become one.

100X80CM. ACRYLIC ON RAW LINEN CANVAS.
In cultural camouflage, one has to identify his edges (which are not accepted as normal), and obscure them by adapting characteristics of the environment. It can be a conscious or unconscious process. Camouflage can be dangerous, not only to the surroundings but to the the person itself because when camouflage progresses for a long period of time, the person can forget who he/she really is.

This work is precisely about that. About fragments of information, about things existing without being perceived, about the ability of our mind to add the missing information. Above all of that, this work is about those "edges" we blur… where do one person end and the other begins? who am I when I'm camouflaged? and where are you when you are hidden?

This large work is a direct result of a performance. All paintings are results of performances- but most of the time we only see the result because the process of the painting is lonely, and done in the studio

ever since I can remember I’ve been drawn to creative expression. Currently located in Barcelona, Spain. Was born in 1988, Ukraine. In 1989 Immigrated to Israel. In 2009, completed BFA studies (specializing in graphic design) in Chicago, Art Institute of Illinois. In 2018, completed MFA studies (in Artistic Production and Research), at the University of Barcelona. “MOFUTA studio gallery” opened its doors on 9.9.16 in Barcelona. It is a multifunctional space that serves as my studio and art classes, as well as transforms into an exhibition space.
Through artistic production, my main goal is to demonstrate that our perception of reality is based on things that are not obvious, but rather hidden. I believe things exist only when discovered, hence the importance of sharing artworks otherwise it exists only in my imagination.
Painting is the basis of my creative process and I'm developing it in means closer to the documentation -video- and the body-performances.