Due to the influence of her father who had been in business in African countries, Africa was a familiar place as well as a source of imagination to the artist. While Africa is often regarded as a hotbed of conflict, starvation, poverty, and disease, the artist seeks to reflect Africa's historical and cultural values through this artwork. Africa is the 'home of mankind' where land was first created about 3.6 billion years ago; it is also the cradle of the Egyptian civilization of the Nile River basin, and the flourishing Islamic civilization in the northern and northeastern parts of Africa. Moreover, wild natural resources—including wildlife in the vast savannah—are a major asset to Africa. In this artwork, the elephant's ear embodies the shape of the actual African continent. To the artist, Africa is a 'land of hope' where it is ready to sprout and bloom again with its infinite latent values and potentials, after lots of pain and hurt. 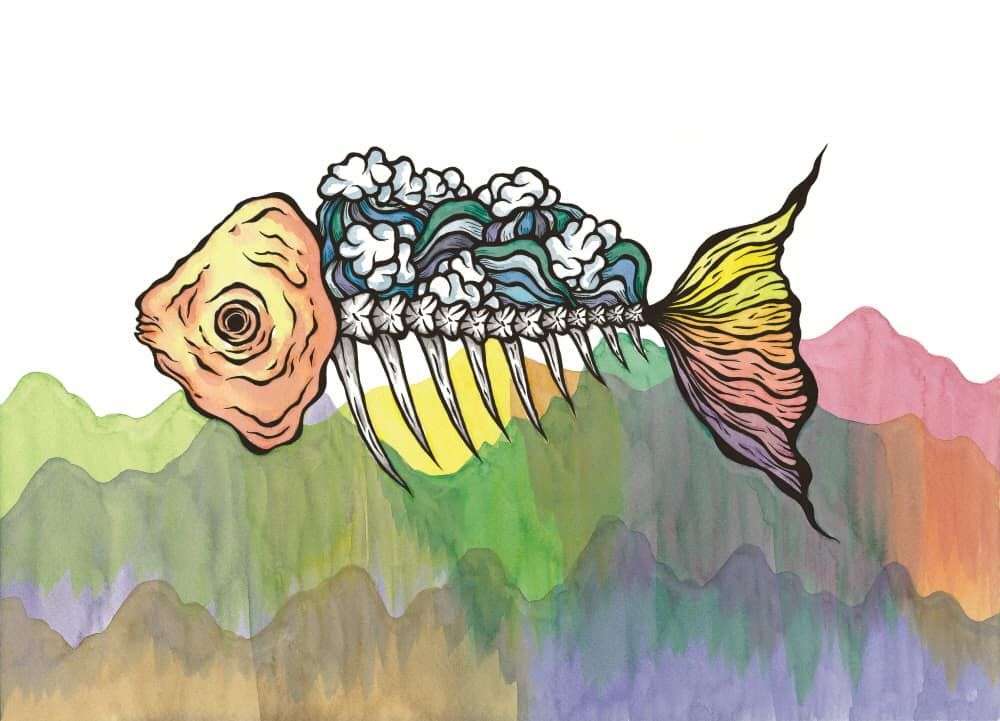 The life of all living creatures is a continuation of creation and destruction. The process of birth, growth, decline, and death is not an exception for any creature, but the death of one creature leads to the birth of another. To the artist, fish symbolizes the continuity of life that leads to infinity like the Möbius strip. Following the birth and growth of one creature in the fish's back—a cradle of life—the creature reaches the pinnacle of its life like a splendid fin. As the gaunt face and ribs of the fish say, however, all life eventually takes one step toward the downhill road and end of life. And again, another creature will be born.

Cuba, which is included on the artist's bucket list, is an object of admiration and curiosity to her. American novelist Ernest Hemingway, who spent many years in Cuba, always enjoyed a cigar as well as a cocktail. Mojito, Daiquiri and Cuba Libre are among the top three cocktails in Cuba. As one cocktail expert in Cuba says, Cuban cocktails are "not just a mixture of ingredients, but true creations and works of art." Having a subtropical climate, a variety of fruits, and the world's best rum, Cuba is the perfect place for cocktails. In addition, Cuban cocktails are an exquisite fusion of Cuban history and emotion. In this artwork, the cocktail glass is shaped as a flamingo—one of Cuba's main animals. Furthermore, diverse metaphors (Che Guevara's hat, cigar, flag, laúd, car, and dancer) represent the history, culture, and identity of Cuba.

Haejae Debbie Oh is a self-taught artist, office worker and writer. Born and raised in South Korea, she graduated from Ewha Womans University for her BA/MA degrees. Without any regular education on art, she started drawing in 2014. Focusing on illustration, she has held three exhibitions so far, and also participated in the Asia Contemporary Art Show (2019, Hong Kong). She became a member of the Artists Committee at the Asian Art Association (2020, Singapore); she won the Gold Prize (Artist Group) for the “World Charity Painting Competition: Fight COVID-19” (2020), as well as being on the global judging panel. Moreover, her artworks have been displayed on TRiCERA since 2020, the online art gallery based in Tokyo. She has been working at the Korean National Commission for UNESCO (2007-present). Based on her long-standing international work experiences and MA degree, she’s eager to blend oriental and occidental cultures through her art.