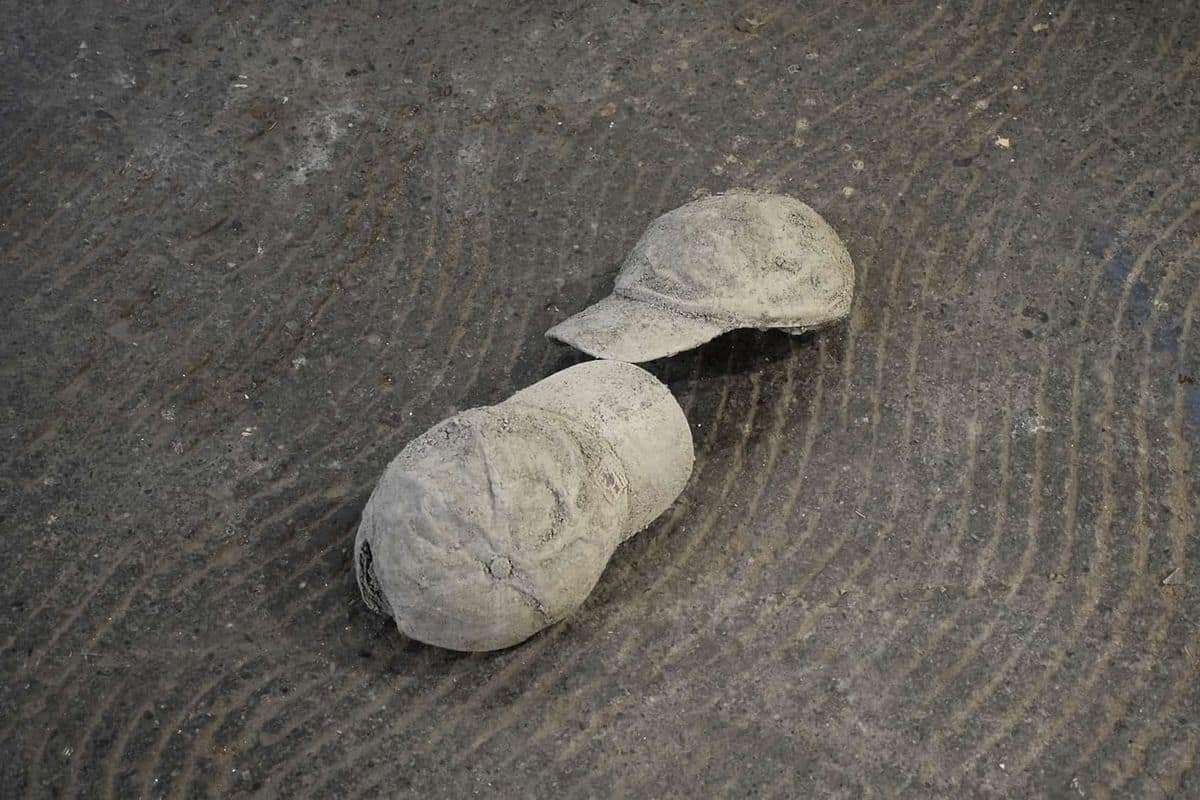 The two Carhartt hats were filled and dipped into concrete and allowed to dry in tension to one another. Once dried these two hats support each other’s weight by the tip of the brim, creating a completed arch. This sensual embrace of what is easily considered a contemporary masculine clothing brand conveys a gay moment of touch, and a concrete form that is dependent on one another; producing a hyper-masculine loop of form and material, foiled by care, tenderness and sexual desire sameness. 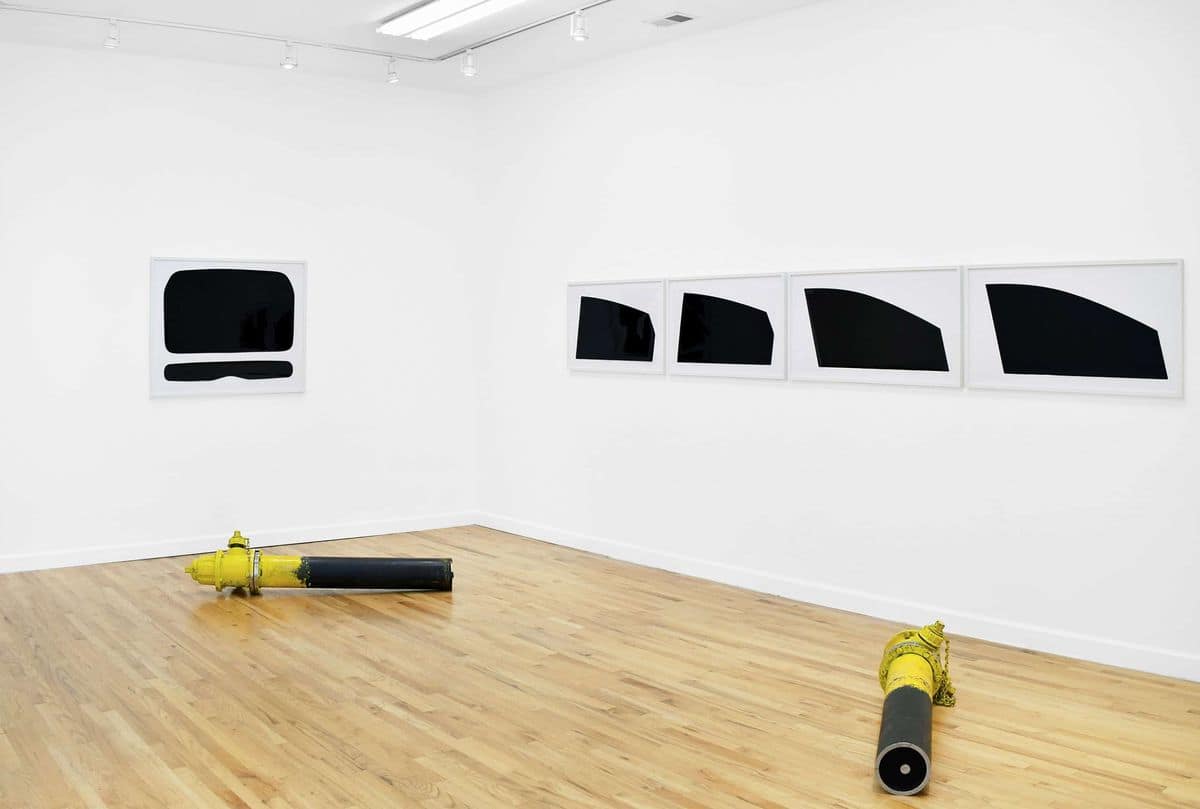 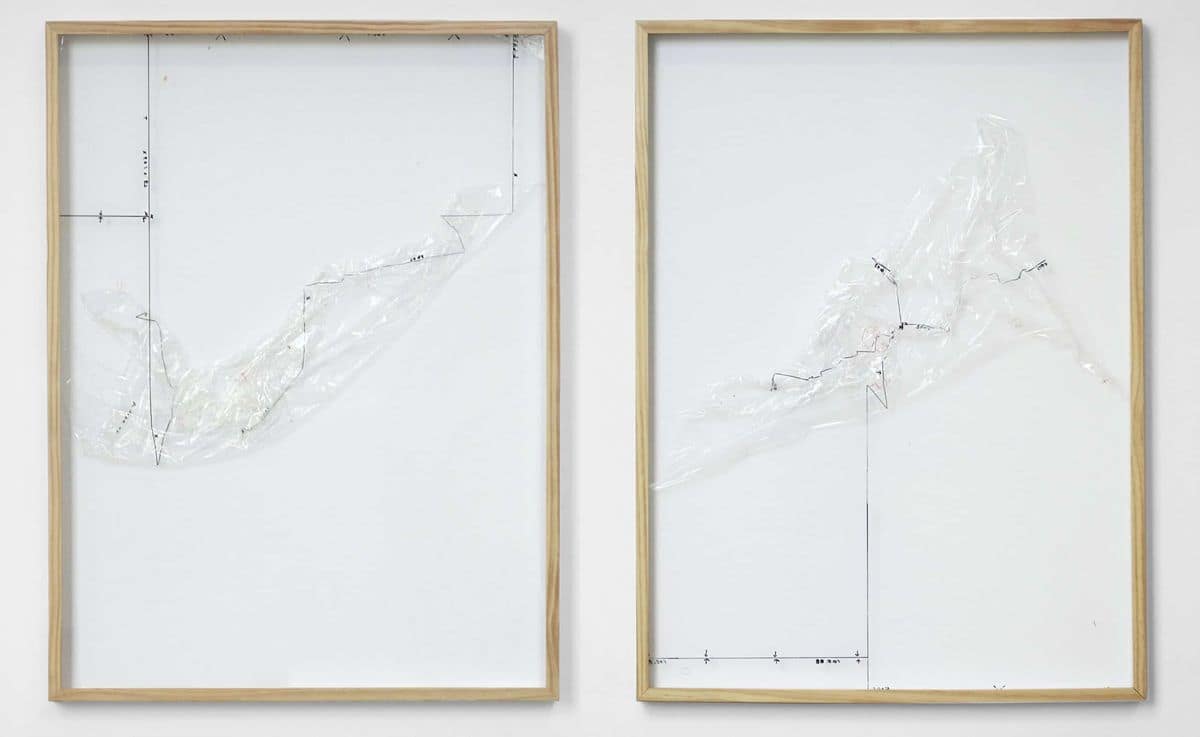 This series of drawings were created by framing plexiglass and the protective film at various stages of removal. The film has dimensions and markers for a hypothetical plan in sharpie, as well as, notes in china maker dictating material discrepancies caused by shipping, handling and studio storage. The edit, revision series is very much about the process of making a drawing for display with the conventional framing techniques materials. The moment of touch or the act of semi-removing the interior film compresses the drawing of suggested notes and measurements; solidifying the gesture, notation and materials as image and a series in the process.

Gary LaPointe Jr. ( born in 1991 CT USA) graduated in 2016 from The School of the Art Institute of Chicago with an MFA in Sculpture and was also awarded the 2016 Outstanding Student Achievement in Contemporary Sculpture Award from the International Sculpture Center. He had received his BFA from Lesley University College of Art and Design and was also a participant of the Skowhegan School of Painting and Sculpture in 2013. LaPointe has exhibited nationally and internationally with his most recent projects shown at EVERYBODY Gallery in Chicago, IL. Lunder Arts Center in Cambridge, MA. and the 2019 Spring Exhibition at the Kunsthal Charlottenborg in Copenhagen, DK. He is also featured in 100 Sculptors of Tomorrow published by Beers Gallery and Thames and Hudson, London UK in 2019. LaPointe currently lives and works in Chicago, IL.