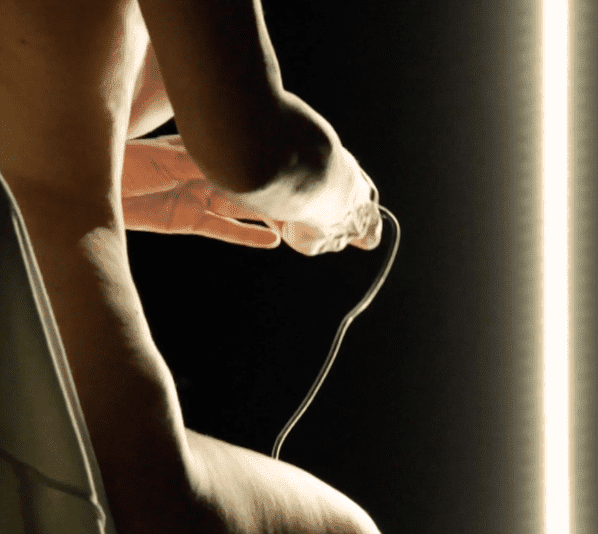 A landscape that always tells a different story, our skin, is scanned with a digital microscope showing details that look like maps of unknown planets. An infinite variety of colors, textures and shapes, patterns and imperfections – sometimes beautifully frightening – are transformed into digital information producing live generative sounds and visuals.
I’m naked in front of two neon lights. I pass a digital microscope all over my body, scanning the different textures of my skin. The custom software, that I created, calculates the average color of each segment of my skin, transforming the data flow into generative live sound and video (the different sounds and samplings blend according to the mix of red, green and blue, that is, the RGB code that is recorded in real-time by the microscope). The visuals projected in front of me are the result of the image coming from the microscope, processed into mesmerizing kaleidoscopic renderings, turning even the smallest imperfection into live art. Scars, wounds, wrinkles and stretch marks become mandala, crystals, jewels.
The performance plays ironically on the concept of biometrics, as the study of that system of variables that could allow reliable identification of individuals, through fingerprint, retina or iris recognition devices, conversely celebrating the chaos, the mistake, the unpredictability of individual identity. The color of the skin, analyzed by the microscope lens and processed by the digital flow, becomes an endless and unpredictable variety of green, red and blue combinations, loosing any possible connection to the Cartesian, narrow and separative reality visible to the naked eye. As well, under the digital microscope, the female and the male bodies lose their sexual identity.
SKIN / TONES is a visual and sound celebration of cellular life itself.

Fair & Lost is the story of hysteria and schizophrenia arising from the conflict between our conscious will and outer conditioning. To manifest this conflict I use electrodes whose polarity are strategically applied to my biceps determining strong involuntary muscle spasms. These spasm interfere with the natural control of my movements and the brain is bypassed, in a kind of Parkinsons simulation. So a simple and everyday action – to put makeup on my face – becomes impossible, difficult and painful.

The project Fair & Lost talks about social conditioning, the conditioning that the society operates on individuals and the conflict that inevitably arises when we are born with a natural tendency to recognize and resist to this conditioning, simply because our spirit takes us elsewhere. The physical pain, which is an integral part of Fair & Lost, is here used to represent an anthropological conflict: the conflict between society and the individual; an invisible war that many of us struggle on a daily basis. You feel the barbed wire only when you try to run away, not when you accept submissively to move within the designated perimeter. When you accept the designated limits the barbed wire ceases to exist. No coincidence that when I speak of this performance I say that it’s a representation of social Hysteria. Hysteria is a term that has been used in old psychiatry to describe a type of neurotic attacks usually suffered by women. The term comes from the greek “Hysteron”, uterus. Hysteria, in most cases, was the symptom of a form of rebellion against social rules, and generally hit “female subjects” simply because women were the group most affected and oppressed by these rules. Their desire to live differently from the way the costume imposed on them, their attempt to escape the conditioning was considered a mental illness and a social threat.
This “torture” machine recalls, even in its visualization, those scientific experiments concerning conditioning, performed on animals and humans in laboratories and protected environments. In my case this is the torture of everyday life for those who “walk on rough paths.” More subtly the performance recalls, as you rightly guessed, that great unofficial experiment which is the television show of reality and pain. In this sense, my past practice in the television industry plays an important role because I know certain inner mechanisms of this industry and I can tell you that it’s much worse than you can imagine.

At the end of the performance I look like a monster, because my brain can’t calibrate the movement of my hands and the makeup spreads everywhere on my face. I become “one of those crazy women on the subway,” as someone from the audience cleverly noticed talking to me after my last performance. I actually turn myself into one of those disconnected women who have something wrong, and you can tell immediately from their makeup. And it’s a great metaphor, because the mechanical routine, once disconnected, becomes monstrosity. I understand that this performance is somehow apocalyptic, because speaks of a society coming to an end and on the verge of collapsing. Moving on from the macrocosm to the microcosm, this performance also recounts the disastrous condition of the country in which I live, Italy, which has long reached the point of no return. Not surprisingly, the music in the background is the “prisoners’ chorus,” from the Nabucco by Giuseppe Verdi, somberly singing of a homeland which is “fair and lost.”

The sounds that we hear, and the visual story that unfolds in front of us, do not depend on a musical or narrative intention; are solely determined by the sequence of letters, words, verses and expressive pauses. The protagonist of the performance is an old Olivetti typewriter of the ‘60s, whose keys are wired and connected to a computer. Through the use of an interaction design software, each key of the machine – and then every letter of the alphabet – produces a precise note, and at the same time triggers a video clip associated with that particular letter. The typewriter is at the same time writing mechanical device, musical instrument and video mixer.
Pictures, notes, noise (sound or visual), mix with the rhythmic beats of the keys, and are woven according to the words that I type. And so I find that there are sentences intensely melodic and poignant. This fourth session of TYP-O project is dedicated to the verses of my most beloved poet, Walt Whitman.

Francesca Fini is an interdisciplinary artist focusing on new media, experimental cinema and performance art. She lives and works in Rome. The focus of her work is always the body and its narrative power, in that border region where performance art and cinema hybridize, creating a new synthesis in contemporary transmedia art practice. She is cited by Treccani Encyclopedia as one of the greatest exponents of cyber-performance in Italy. "Francesca Fini’s moving images are provocative devices calling up passions and emotions. They show a body amplified by technology whose animal and biological nature is left untouched. Her well-made videos are not mere recordings but short movies full of amazing and captivating genius." (Alessio Galbiati / Digicult.it magazine)