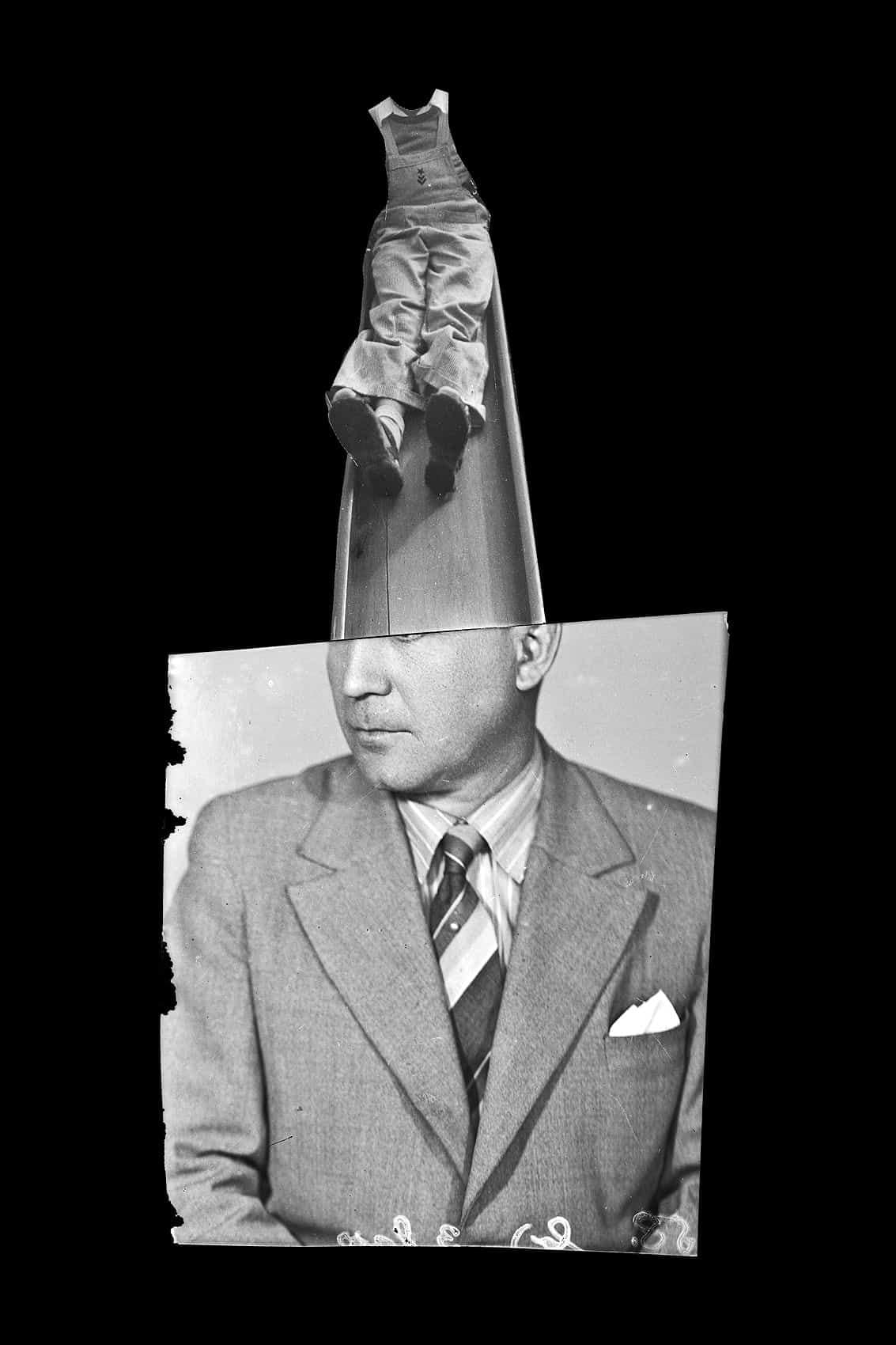 "THE TRUTH IS IN EVERYTHING, EVEN IN MISTAKES" 2019

To create his most recent series of works, he left his camera in his drawer. He rescues images from second-hand stores and family albums forgotten by history. They unfold into collages and photo collages from 400 negatives from the 50’s and 60’s, when photo cameras became popular. In his experiments, he does not dismiss mistakes. Quite the opposite, he tries to explore them, bringing to light another, more plastic, reality.
The idea is to reinterpret the images, bring them a new, irreverent meaning. After they are cut, the photos are part of weird collages, a little surreal, a little spooky. Men and women have their faces mutilated by the artist’ precise blades. Torn into pieces, they get reconfigured, inverted, following Moholoy-Nagy’s style.

Fabiano is a former professional skateboarder, known today as contemporary artist. Akira is a future contemporary artist, known today as professional skateboarder. They inspire and influence each other, working together on different projects. From Fabiano's obsession with Superman, came the connection with the character Bizarro, this enemy from a parallel universe where everything is inverted, strange and pointless.
Imagine two skateboard superstars in Bizarro's world. They move in a different way, wearing strange and elegant costumes, and they are headless. Cidade das Artes, the monumental architectural project in Barra neighborhood, became the ideal ghost zone for the production. The videos and photos from the performance sessions developed into a video piece, with soundtrack also composed by Fabiano, a series of collages, a zine, and a t-shirt for people without head.

Skateboarding is an essential component of everyday street culture, very close to architecture and urban space, as it feeds on its materiality, corners, walls, edges, boardwalks, benches, etc. Investigating a series of portraits of the women and men who skate, the architecture of São Paulo is revealed through the daily cohabitation and friction between buildings, people and skates.

Fabiano Rodrigues transits through photography, collage, video art and performance. Self-taught artist, Rodrigues explores in his photographic work the relationship of his own body with the architecture and landscape of urban centers. The photographer is the winner of the Mundie Photography Prize in 2016; and twice received the Acquisition Prize from the Pinacoteca of the State of São Paulo in 2012 and 2013. In 2017, he joined the Photography Collectors Club of the Museum of Modern Art of São Paulo. He currently lives and works in São Paulo. He has already held individual exhibitions at Casa Nova Arte Contemporânea (2016), SP; Pop Up Gallery Tape Tape (2015), RJ; Solo at SP-Arte / Foto (2012-2015); and Logo Gallery (2014). Fabiano has already held exhibitions at the Rio de Janeiro Art Museum (2013-2014), Zacheta National Gallery Of Art, Poland (2013-2014), São Paulo Art Museum (2013) and Pinacoteca Station (2012).