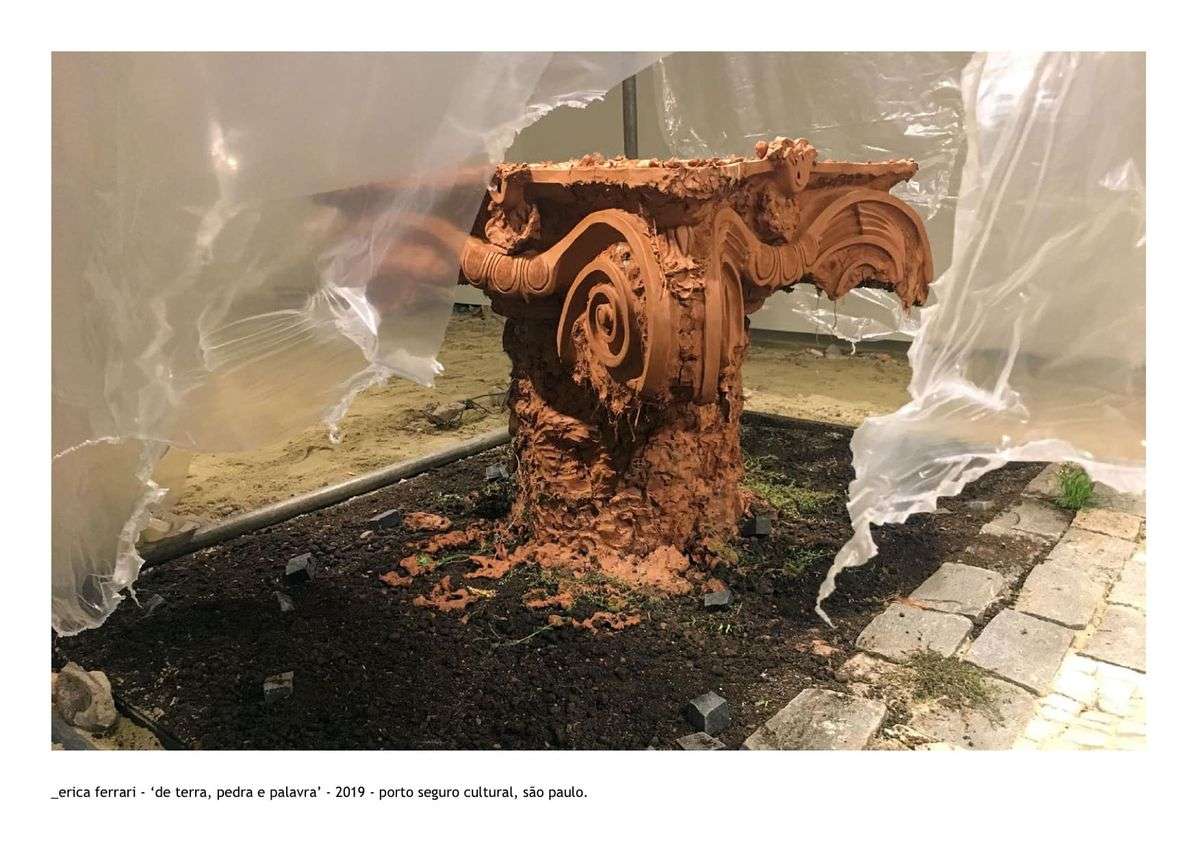 In the project ‘Of soil, stone and word’ questions regarding the construction, destruction, display, exhibition and resignification of a historical site are explored through the realization of an installation work in the exhibition space. The work reflects the results of research and plastic research from the collection of different historical records, including material remains, newspaper articles and virtual posts of social networks and information about a chosen site – the Patio of the College in São Paulo. Primordial symbol of the city, its particularities of construction, use and symbology elucidate the process of Brazilian development, from its colonization to the present time. In this space of public use, the first width of the then village, converge religiosity, oppression, neglect, patrimony and memory. 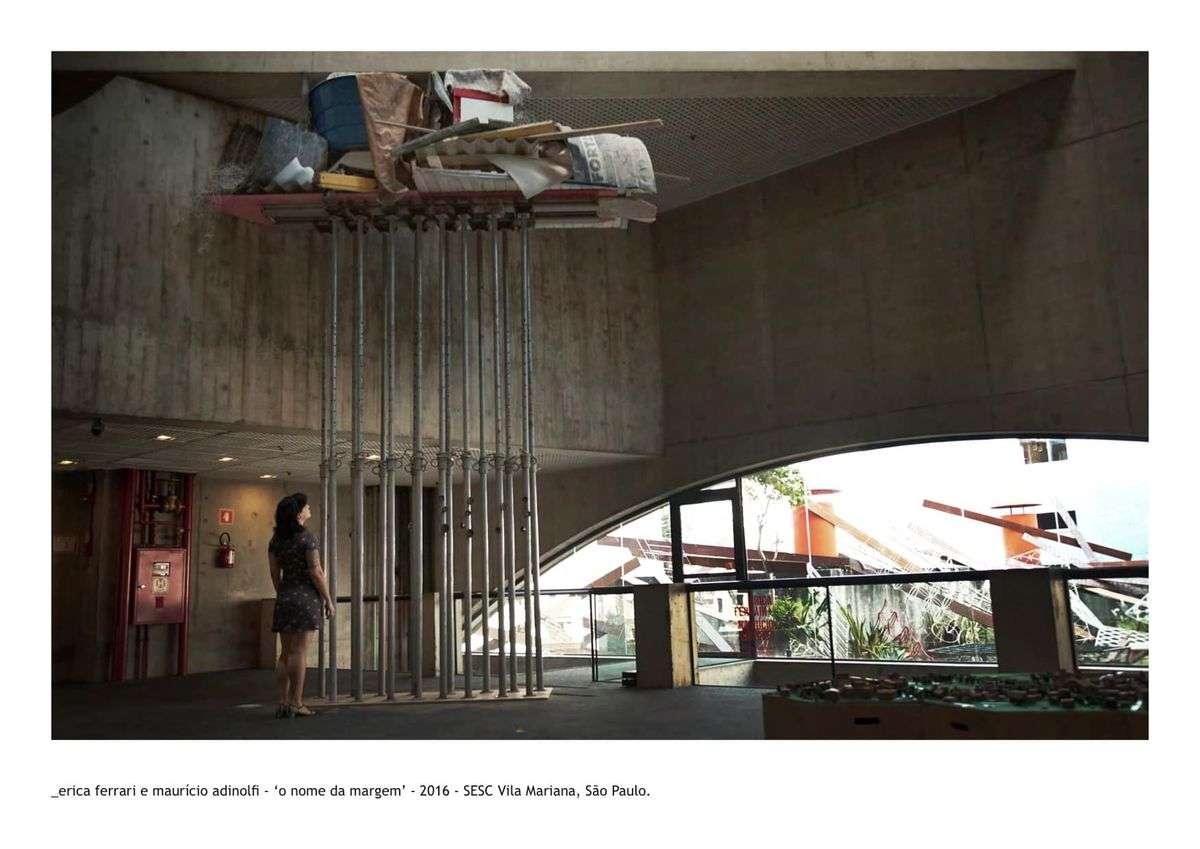 There was a time when names did not exist. In the recently formed world of Macondo, created
by Gabriel Garcia Márquez, it was necessary to point to things in order to mention them. In the
same way, the streams of São Paulo have no names in hundreds of official records. Still, the
cruel fact of this situation refers to the date of the lack of nomenclature for these bodies of
water: it does not stretch back to the beginning of time, as in Márquez’s fiction, but rather to
the beginning of the city’s mass urbanization. Open sewers, waterway dumps, harbors for disease: these are the attributes given to the streams ever since our childhoods. Gradually these waterways were canalized and paved over so that more ‘city’ could advance upon them. The city’s colossal growth without comprehensive and systematic planning determined the fate of both its rivers and its population. 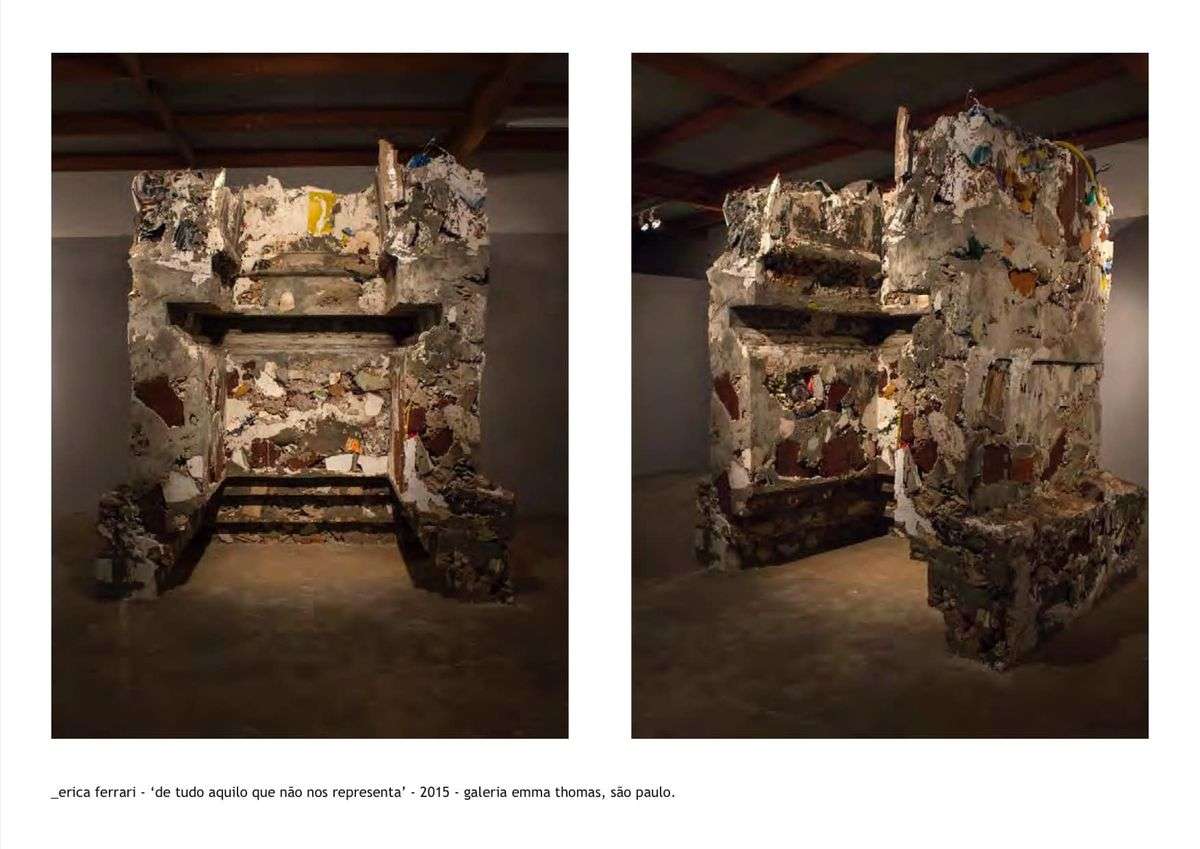 The main piece in this set of works is an installation made of cement, plaster, debris, iron, foam and plastic. Based on a replica built of wood, the public space that constitutes the surroundings of a monument was sculpted in real scale with construction material and scraps. For this purpose, the chosen starting point was the Obelisk of Memory, the oldest monument in São Paulo, situated at Largo da Memória in the city center. After the research, the obelisk was selected because it appears as an empty mark, paying homage to its own existence. Still, the public use of the locale where it’s found is quite significant. From this perspective, there is an attempt to consider this space, which should be represent some meaning (as a civic symbol) but which has other functions (as a meeting place, as a locale of permanence, as passageway, as shelter).

Erica Ferrari is a visual artist and researcher. Master Degree in Visual Arts by the School of Communications and Arts at the University of São Paulo (ECA-USP). Bachelor of Fine Arts from the University of São Paulo with Habilitation in Sculpture. Researcher associated of LabOUTROS – Laboratory of the Department of History of Architecture and Aesthetics of the Project FAU USP. In recent years, she has produced objects and installations based on research about the relationships between urban space, history and architecture. Recent exhibitions include ‘Stratigraphy’ at the Paço das Artes, ‘Totemonumento’ at Leme Gallery, ‘Provocar Urbanos’ at SESC Vila Mariana, ‘Study for Monument’ at Funarte in São Paulo, ‘Interaktion’ in Berlin, Germany, ’32nd Biennial of Graphic Arts’ in Ljubljana, Slovenia and ‘Has always been dystopia’ in Enschede, Holland. She is a collaborator of MSTC – Movimento Sem Teto do Centro [Low Income Workers Movement of City Center].