The term “rebirth ” SourceRect who does not feel part of this world but is stretched upward, an elsewhere made of pure spirit that can be accessed only by freeing himself from the weight of the body. The gaze of the spectator goes to the center of the images where there is always a body of adolescent leaning towards the light that is Dall’Alto and amazement stems from the realization, not always immediate, that that that body is immersed in water. The metaphorical reading of the images in the water the maternal element linked to the mystery of the birth and the depth of the sea to the unconscious in which our desires and our fears dwell. The light separates the outside world, the sky, the archaic paternal element that draws and to God, from the inner and the body constitutes a connection between external and internal. In the same way the body, for the adolescent, constitutes a watershed between the atrophies world and that of the adult life to which it faces, with hope and fear. 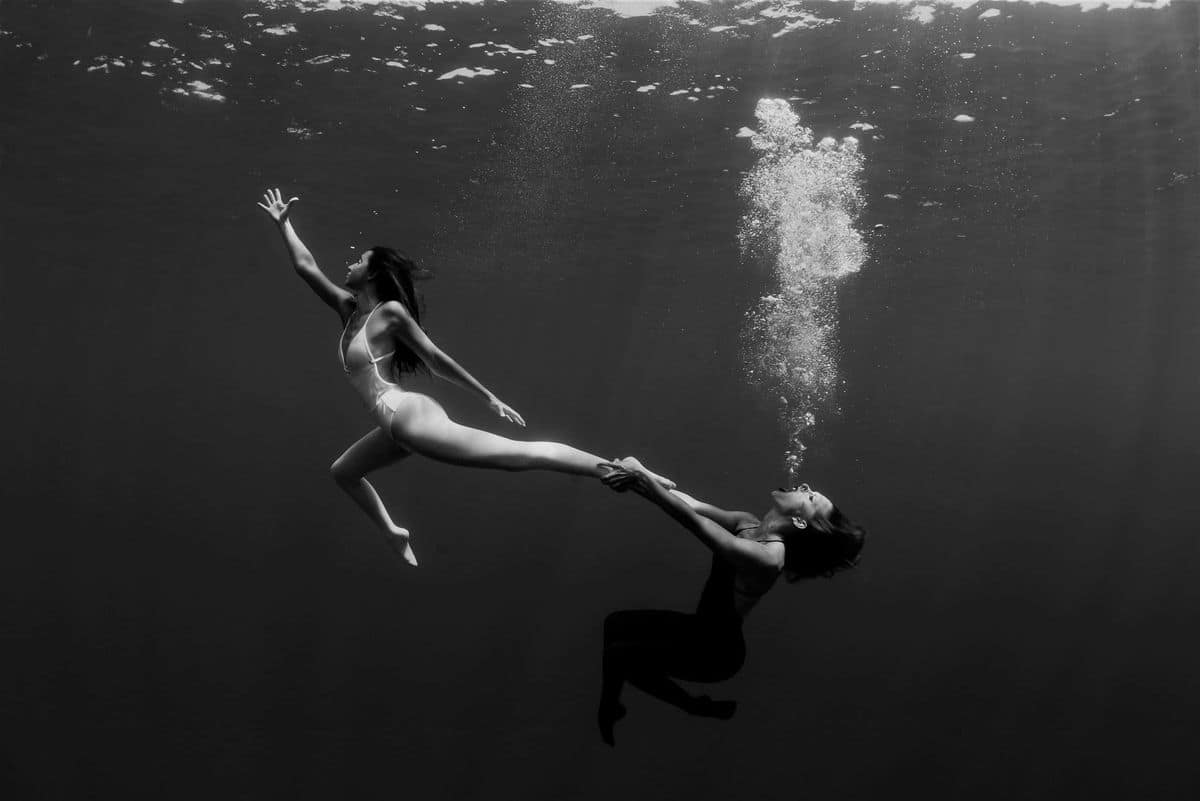 All the universe i based on two opposite principles Yin and Yang: one cannot exist without the other, like the night can’t exist without the day, they are interdependent. No element of the universe can be only totally Yin or totally Yang.
Each of the two elements containes the seed of the opposite, as every woman carries inside a male part and every man a female one.
They are among them complementary, the grow and decrease, they feed each other in order to reach a balance. There might be four kind of displacements: too much yin, too much Yang, to little Yin, to little Yang.
The complementary and alternate action of Yin e Yang moves everything in the uni- verse, taking place in time and space, creating microcosm and macrocosm.
The interactions between Yin and Yang give Birth to the movement and LIFE OF UNIVERSE

Plastic envelops our environment, in some areas of the planet you just have to immerse yourself in the sea to find yourself surrounded by this indestructible material, my story begins with a simple dip, an immersion in a world full of plastic, what the beginning was to be a pleasure transformed into a dramatic experience. A desperate cry, of pain, a cry of terror because the material that was supposed to simplify life actually turned into a denial of life itself. In the end, a desperate and pleading hand tries to be an alarm signal, a cry for help to search for a lifeline.

Syracusan doc, but long lived elsewhere, my diving training was very varied and quite brilliant, covering all roles related to diving, landing also to that of trainer instructors. But one day I realized that all the sea I had learned up to that point was the sea inside me, at most I could tell. And because sometimes tell is not enough, we also want the images. So, once you’ve experienced the first shot, the others arrived as a result. The images, photos, diving, those colors of silence: to describe that sea without even talking about it. A universal dialect, the language of emotions. In 2011, I introduce the Italian Championship of Underwater Photography and win in the category Compact. Today my specialization, I am trying to convey is just underwater photography compact cameras often not too expensive equipment, which can have towed unthinkable things. Convincing even the most skeptical that the image is not only the equipment, but you must know that, but in the eye and heart of those