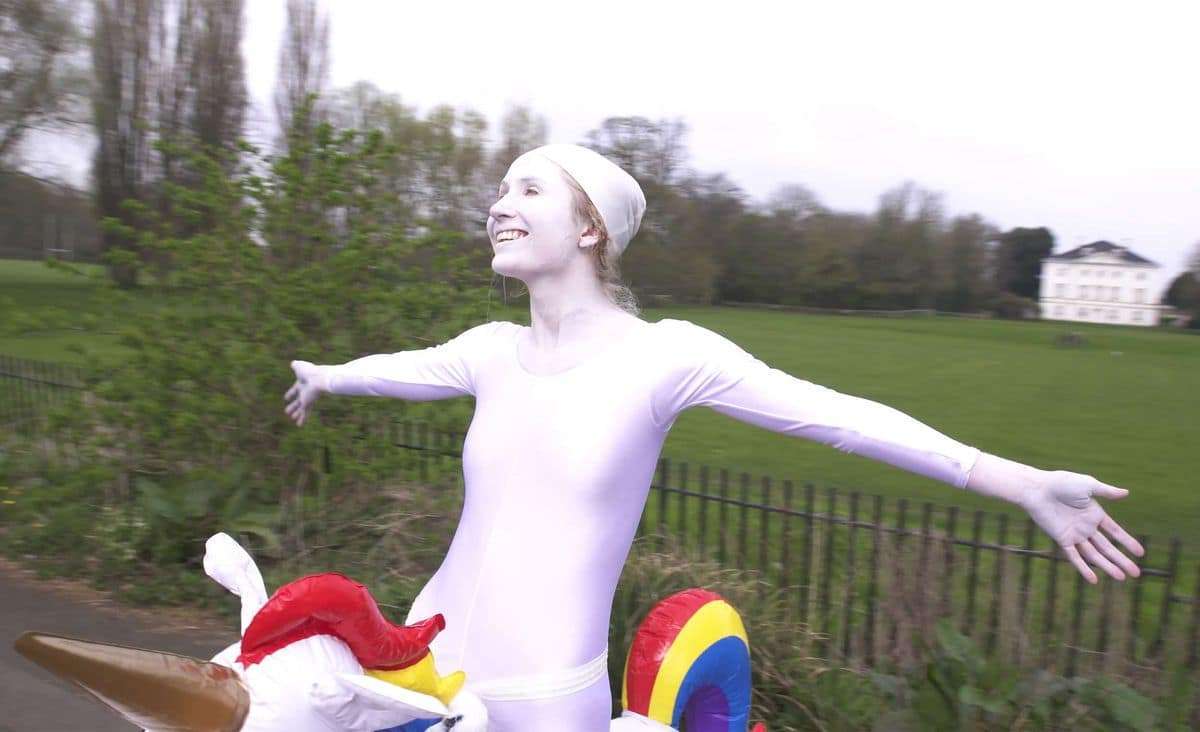 'Angel of the City' is a video documenting a performance piece outside Marble Hill House in London, home of Henrietta Howard in the 18th century. The piece challenges the way Henrietta has been remembered only as 'King George II's mistress', despite her achievements, including designing the house, based on a palazzo in Venice. I recreated Marino Marini's Angel of the City, a sculpture the art collector Peggy Guggenheim placed in front of her palazzo in Venice, to embody Peggy's defiant spirit, and connect the two women – both outsiders, whose legacy have largely been reduced to their relationships with men. I reject conventional ideas of female beauty in the performance, to challenge what's required of women to be on the inside of society.

Communists in the Funhouse 2019

‘Communists in the Funhouse’ subverts the universal queasiness felt towards menstruation, playing off euphemisms, including France’s ‘ketchup week’, Spain’s ‘my steak is defrosting’, and Denmark’s ‘communists in the funhouse’. The piece questions the shame women and girls are made to feel for not managing to 'control' their period, and transforms staining into something active, free of shame, and almost ceremonial, using a visual language playing off sociologist Mary Douglas’ idea that dirt is matter out of place.

‘Blamelessness and Barley Water’ fabricates and distorts history to question how society treats women today, despite its protestations of feminism. Shared societal memories of sexism and female oppression in the 1950s have developed into a shared societal consensus that things have moved on. Presenting contemporary examples of female objectification and oppression as a fictitious historical memory confronts us with this delusion.

Eleanor Green is a London-based multimedia artist using performance, costume and film to explore societal conventions and norms controlling women. Eleanor plays with history to question how society treats women today, despite its protestations of feminism, and is currently undertaking a series of commissions for Professor Mary Beard, exploring themes from her book 'Women and Power'. Eleanor has exhibited at Somerset House, and at the 2018 Royal Academy of Arts Summer Exhibition in London.