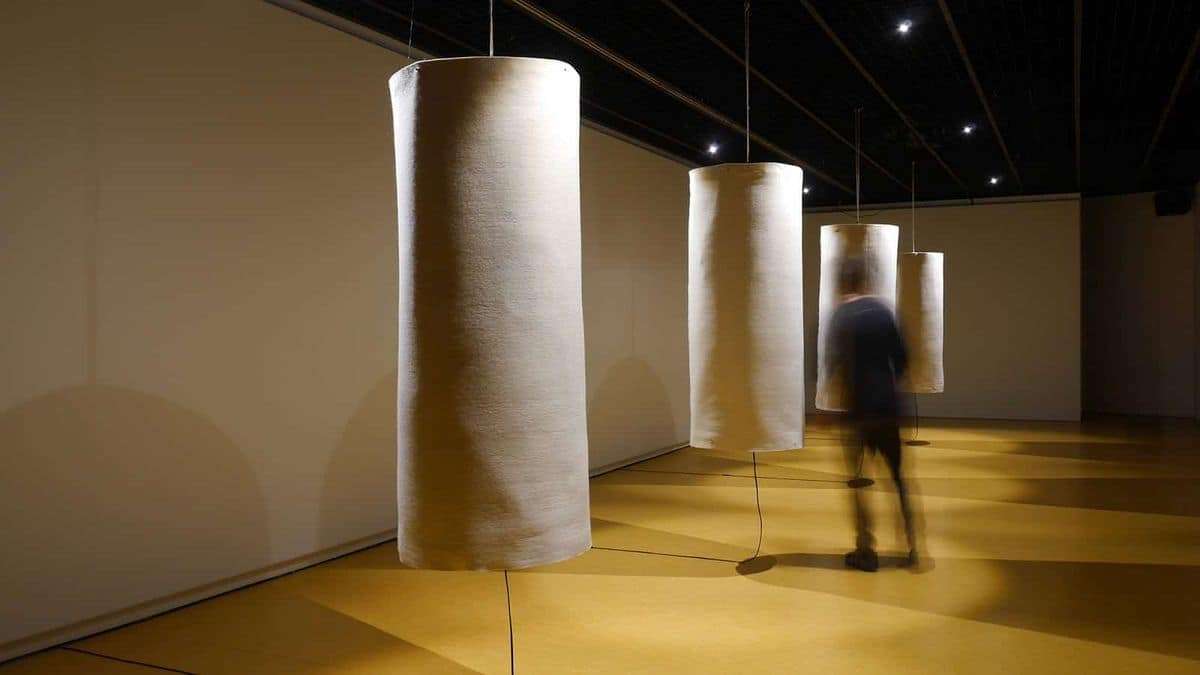 This work is a installation formed by four white felt cylinders hanging in the middle of the exhibition space. Each of the sculpture objects hides a speaker system that allows us to listen to a fragment or part of a whole composition created with an idea of silence. The speaker array is controlled by a software that listen the levels of decibels in the room. If there is noise, the musical composition becomes inaudible, if we stay quiet and keep it like that, we will be able to listen to the composition, shyly, it will reveal into our ears.

"Trencar El Silenci" in Catalan means literally, to break the silence. Silence as, John Cage said, it is an illusion, such a thing doesn't exist. It only exists in the void of space, were sound waves do not travel because of the lack of air. Yet, silence eludes us, it is always conditioned by context, and as much as we can strive for it is constantly attacked by all sorts of hums and noises that break the silence. 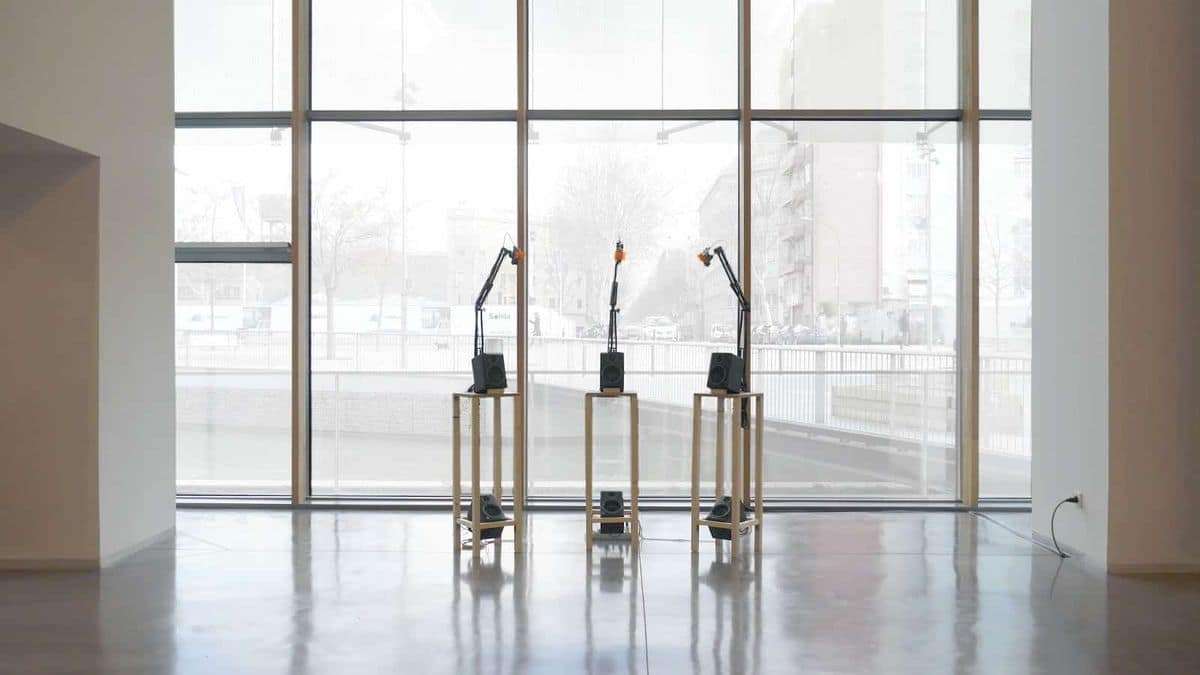 Mobile Field is a reactive sound installation sensible to the environment where it stands. The system captures, transforms and playbacks into the audible electromagnetic fields produced by all sorts of electronic devices. Through real time capturing of those fields the system generates an evolving composition made out of waves surfing our contemporary urban context. The piece is formalized as an sculptural object that senses nearby electronic devices such as cellphones; and recognize them, records their electromagnetic field and playbacks the resulting sample acquired.

The work invites the visitor to discover the phenomena of electromagnetic fields. At the same time the piece invites to an immersive, evolving and transformative experience created in the realm of electromagnetism. The piece underlines the necessity of questioning the impact of mobile technology on our everyday life through immersing ourselves into the complex network of electromagnetic waves that surround us daily. 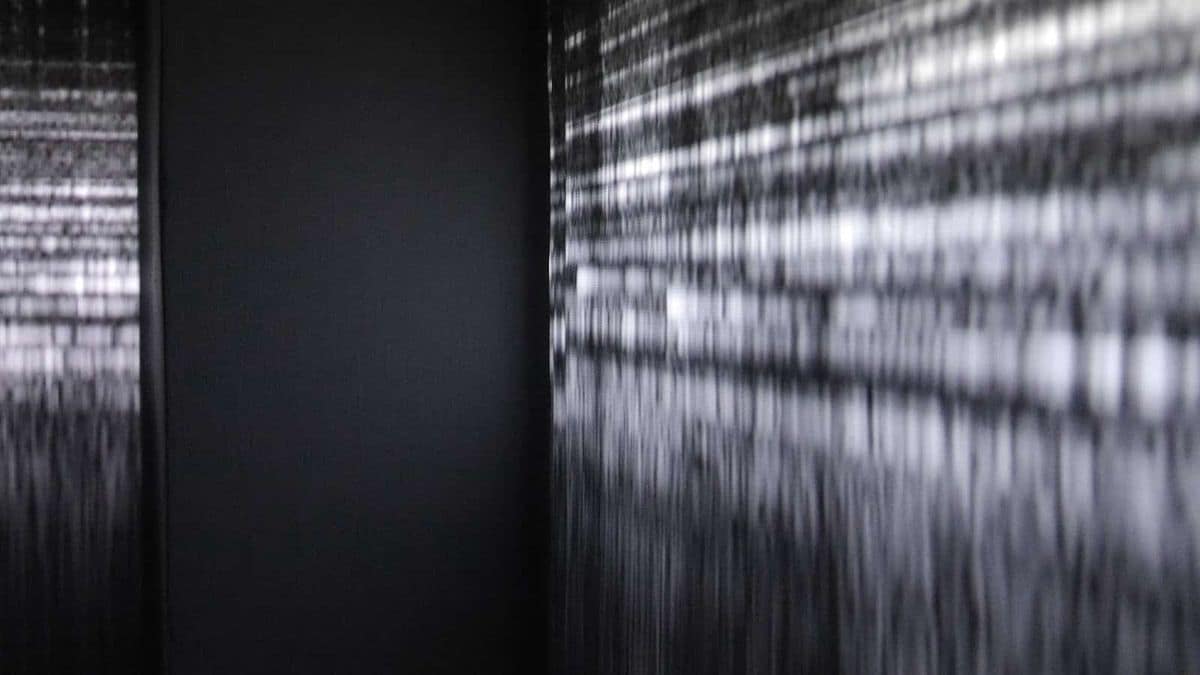 The installation displays a sound composition that cannot be heard or listened but just be seen. The work features an array of projectors on a dark empty room displaying an ever-changing landscape of spectrograms (graphic representation of sounds). The spectrograms are the outcome of translating via-software sounds into images. The outcome is a bast real-time changing digital landscape that hides a music not to be heard but seen.

Edu Comelles lives and works in Valencia, Spain. He is a sound and media artist and curator working in the fields of new media, sound art, musical production and sound design in a wide variety of contexts.

Comelles has been playing live solo and with collaborative projects in festivals such as Sonar in Barcelona, Fase in Berlin, Escucha in Buenos Aires or Radar Festival in Mexico among others. His live sets often happen in unusual places and non conventional venues such as churches, cloisters or art galleries in Spain and Europe.

His installations have been displayed in institutions such as Reina Sofia in Madrid, LABoral in Gijón, Tabakalera (Donostia), Espai Rambleta, Bombas Gens in Valencia; Etopia (Zaragoza), CAAM (Gran Canaria) or the CCCB, Caixaforum or Arts Santa Mónica in Barcelona, his hometown.

In 2017 won the prestigious Leonardo / BBVA Grant as the best Digital Art Work with Spectre Project. He has been awarded with grants and scholarships all around Spain and has been