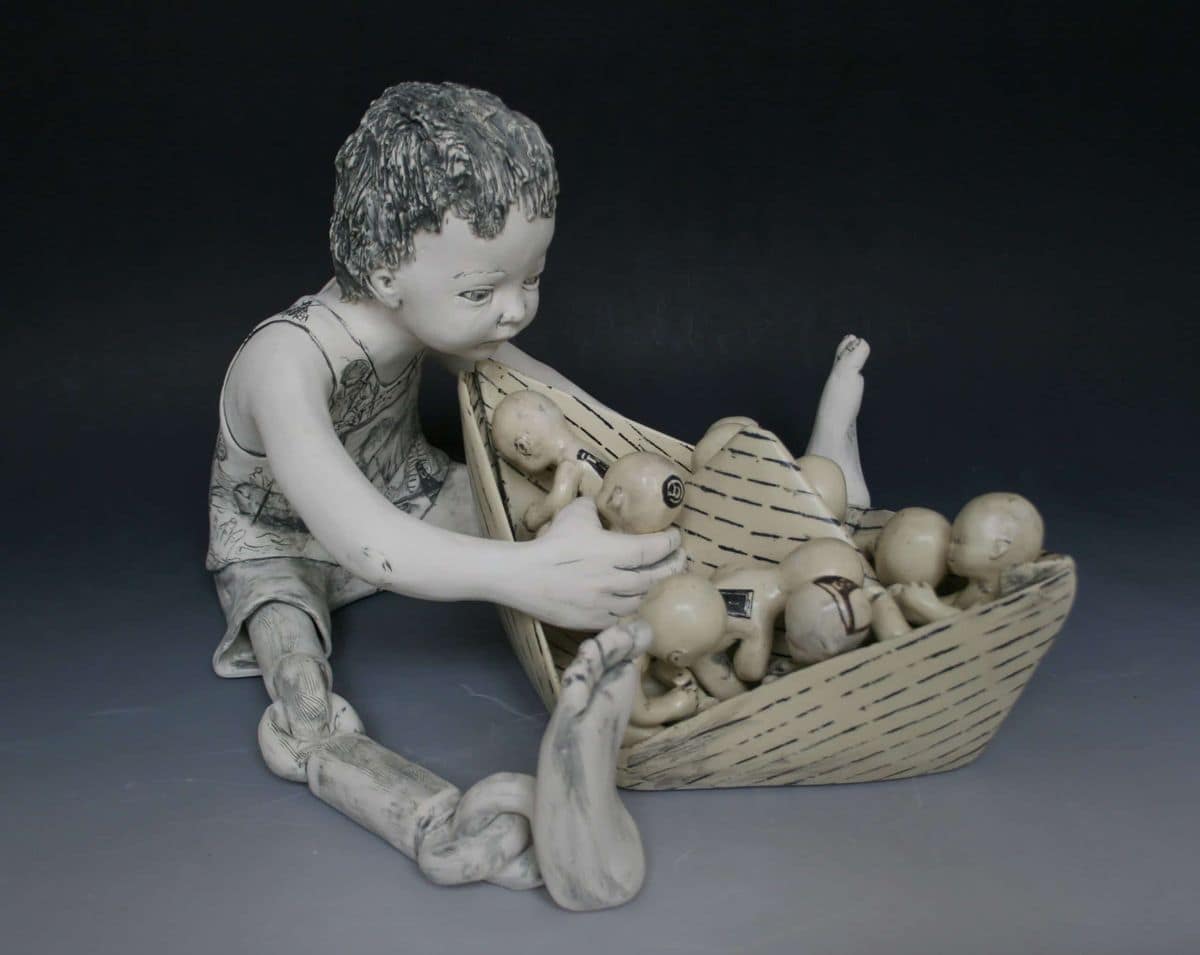 Freedom – just around the corner from me – the hope for a better life, mixed with fear, despair, and hunger. Create human tragedies of men, women, and children drifting in mid see on broken-down vessels. People with a whole life story ripped apart. But The world looking from aside doesn’t see people, they see vessels, waves of immigration, socioeconomic threats, unemployment issues. Demographic changes.
They are just a number on a chart, a point on a statistic Graff somewhere. Human tragedies are converted to a political problem dealt with by rules, regulations and detention camps.
The world, while regarding the refugees as a political problem has most conveniently forgotten their human condition.
30X55X57 cm 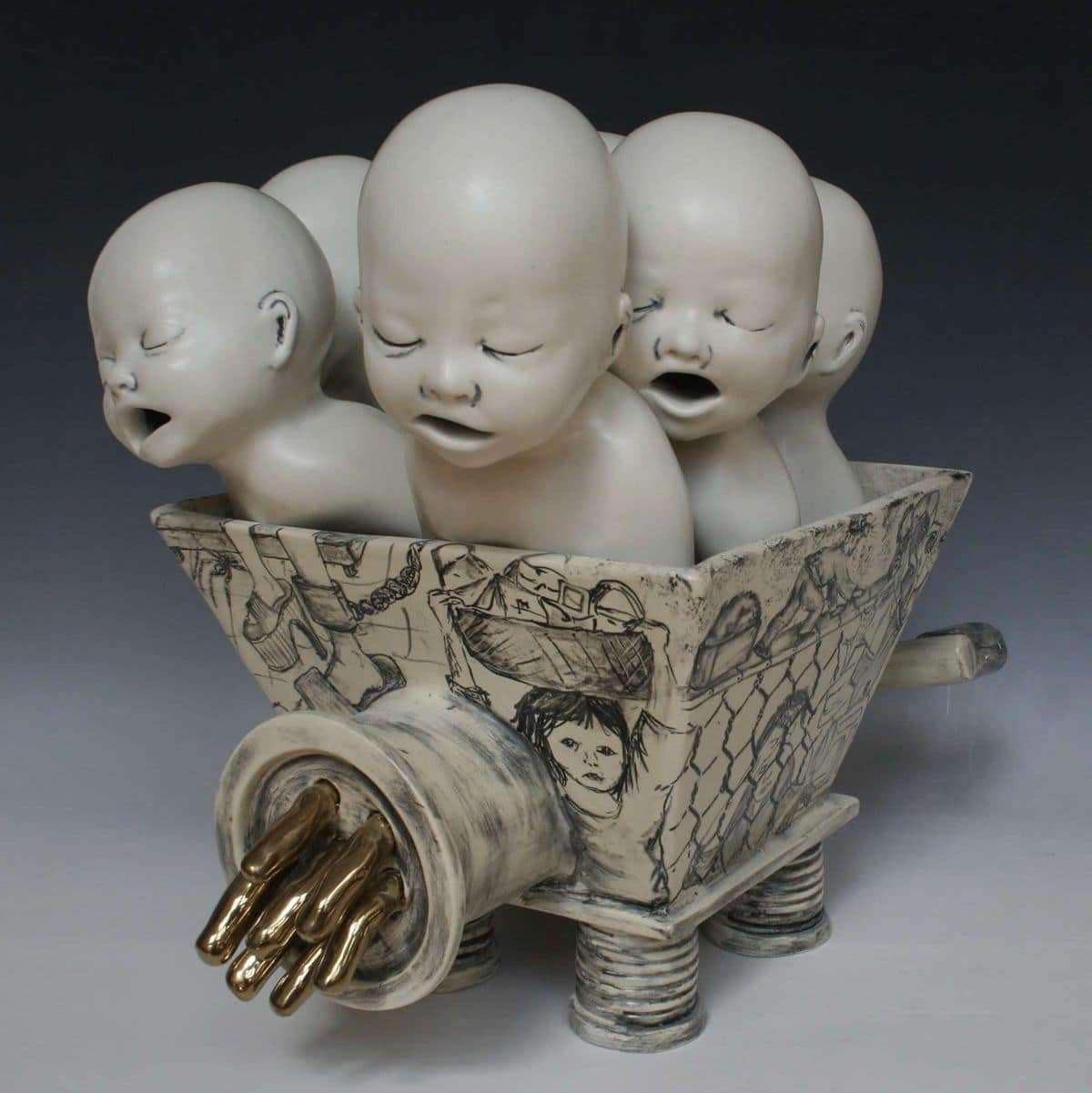 It is estimated that around the world there are 168 million children who have a job.
Not an office job, but jobs more resembling slavery, Plantation workers, miners, factory workers, domestic slaves, and prostitutes. Hard long hours in unhealthy conditions, in third world countries, where discrimination against the week social classes is part of the system. Added to that are war zones, and poverty-stricken societies who depend on any extra source of income in order to survive, And we think of it as “them”, as something happening somewhere far away but the reality is that child exploitation exists also in developed, enlightened first world countries were governments act against the same immigrant population who supports there economy.

we nod our head in shock while turning a blind eye on the big companies employing these children because they give as discounts.
And we carry on with our nice life not wanting to know how very “not nice” is the life of those children.
48X29X35 cm 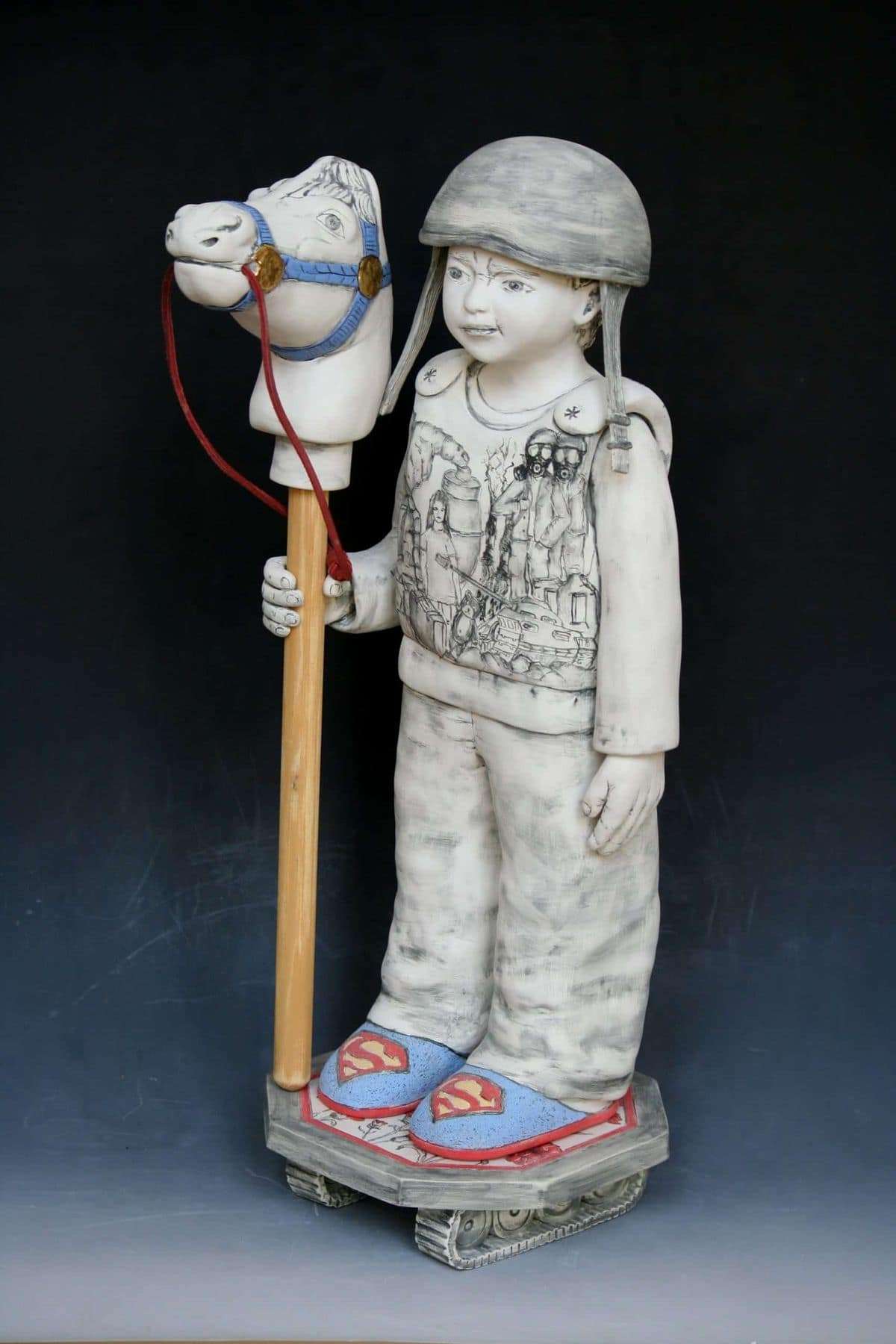 Our role as Parents is to care and provide for our children, and to ready them for the world, they are about to enter. We send them to college, teach them what is considered to be a good education and prepare them, the best we can for life.
They grow up and assume responsibilities, they are told that now is their turn to care and protect this planet, that we did it when we were young and now, they are taking over.
We send them, grossly an equipped, to deal with violence, pollution, and war, expecting them to find superpower capabilities to deal with all the mess we created for them.
67X40X30 cm

I was Born in Argentina 1961 and studied fine art in la Plata University.
I Moved to Israel and Earned a BFA degree from the Bezalel Academy of art
and design in Jerusalem (1983).
I manage an active studio and lead workshops in Israel and abroad. My work has been
exhibited in leading galleries and museums worldwide including new Taipei city
Yingge Ceramic Museum (Taiwan), Mint Museum USA, Gardner Museum
Canada, Whatcom Museum Washington, Alcora Museum Spain, New Bedford
art Museum USA, Vallauris institute of art France, Keramikmuseum Westerland
Germany, Eretz Israel Museum, Israel and many more.
My work is part of several private and museum collections.
I have participated in several international symposiums and residences, and have received several prizes in ceramic competitions.

For several years – Board member of the Israeli Ceramic association,
A member of the IAC, Member of Artaxis and the founder of 2 cooperative
galleries in Tel Aviv and Jerusalem.