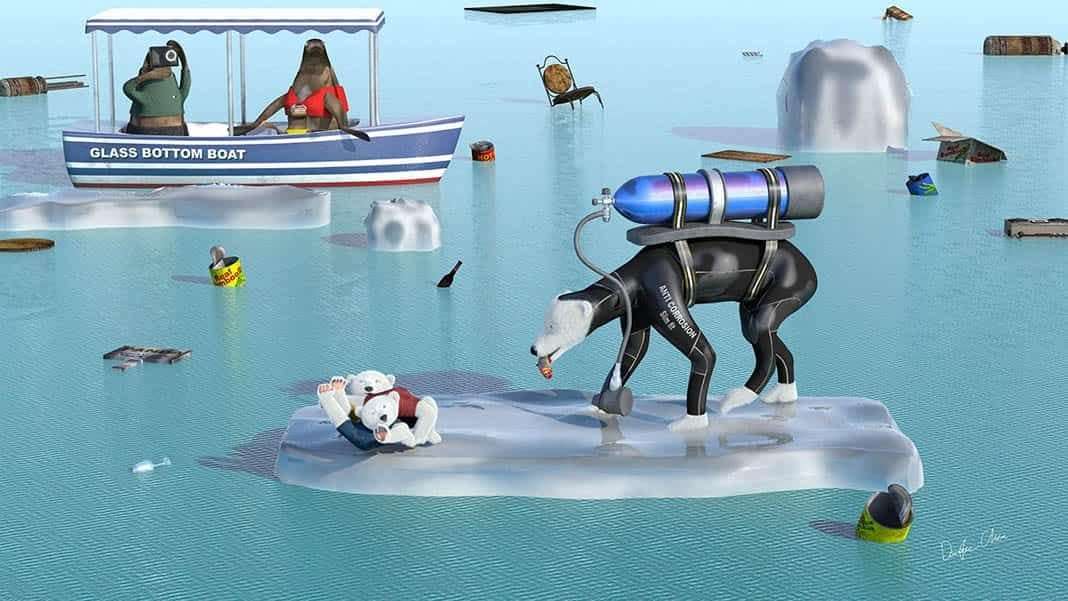 Temperatures in many regions of the world are changing due to high concentrations of greenhouse gases that warm the Earth’s atmosphere. With warmer winter in the Arctic, ice that is melted in the summer does not refreeze. Sea ice also melts at a cooler temperature than freshwater. Due to the global warming the glaciers calving and retreating dozens to hundreds of meters every year, and the pack ice is disappearing at record speed.

Bearded seals make their homes in sea ice. Without the sea ice, there are no seals, which means that the polar bear’s meals have migrated. The bears are forced inward on land which creates more difficulty hunting for food and difficulties in reproduction. There are fewer square miles of ice in the Arctic, there is less food, which puts the bears at risk of becoming endangered. In a longer term, if emissions continue to rise unchecked, the risks are profound and might precipitate the sixth mass extinction of plants and animals in the Earth’s history.

You can watch the augmented reality elements of A Hunt at here: https://youtu.be/QDbsJ6bc2lo The Segregated Water Fountains represents the injustice of treatment to animals. The ‘pet’ water fountain is visibly more luxurious than the ‘food animals’. We can therefore see straight away that the image is simply evidence of controversial inequality. Our human segregates animals to groups for sentimental reasons and consumption purposes and ignores the fact that all are living creatures that share existence with human beings and deserve to be free. This has a metaphorical similarity that reminds us the segregation of black and white people in America during the 1950s. Till today the injustice still existed in our society, more obviously in the criminal trial. The augmented reality animation of Segregated Water Fountains expands the metaphor to a broader topic by showing the prejudice on the external figure that caused a grey color humanoid character wearing “police skin coat” pulled the trigger and shot another grey color humanoid character who wears a “black skin sport suit”, despite the fact that their internal characteristics are all the same. The audio was extracted from BBC news “St Louis: Unrest after police killing of teenager”, to give audience more context to the reality.

You can watch the augmented reality elements of Segregated Water Fountains at here: https://youtu.be/_6V4o9KcSis In a welcome piece of good news for the world’s threatened wildlife, the giant panda has been downgraded from ‘Endangered’ to ‘Vulnerable’ on the global list of species at risk of extinction, demonstrating how an integrated approach can help save our planet’s vanishing biodiversity.

While the panda’s status has improved, climate change is still driving these animals toward extinction. Giant pandas are native to mountain ranges in China, and as such, they’ve adapted to live in cool temperatures. As climate change warms their native homes, panda populations must move higher up in the mountains to find areas that are acceptable temperatures. Combined with the fact that bamboo forests are slow-growing and not likely to migrate, pandas may need to choose between being hot or being hungry. Due to increased infrastructure building in vital areas used for food and migration by pandas, panda habitat has become smaller and more fragmented. Despite a lot of good work from China in creating new panda conservation areas, tourism and development were putting increasing pressure on the species. In a longer term, if emissions continue to rise unchecked, like many other extinct species, giant pandas might only be examined in the museum.