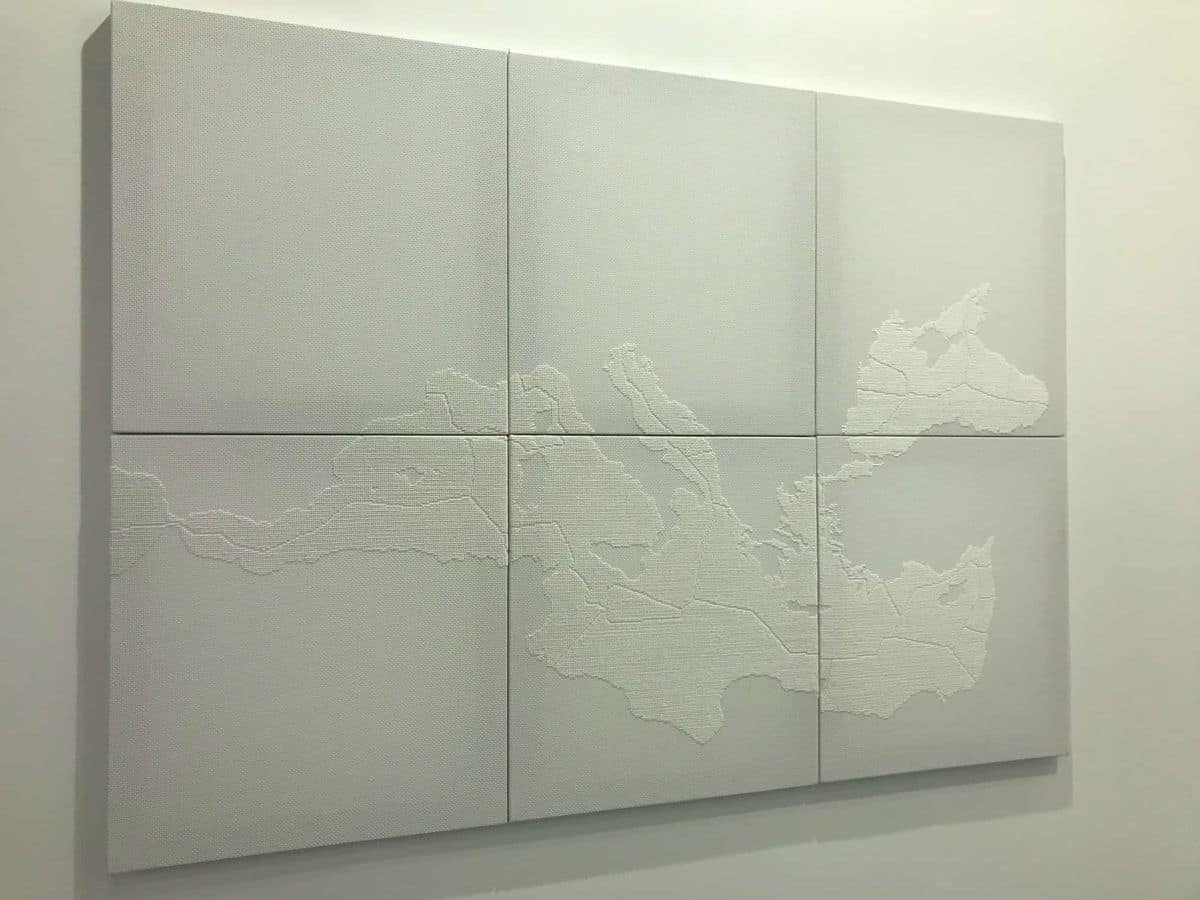 My current ongoing work revolves around the concept of borders’ fluidity and consists in a series of maps of the maritime borders in the Mediterranean sea.
Working on ideas of approximation, I am repeating the same map at different scale, addressing the very impossibility of faithful representation in mapping, therefore negating univocal approaches to socio-political definitions 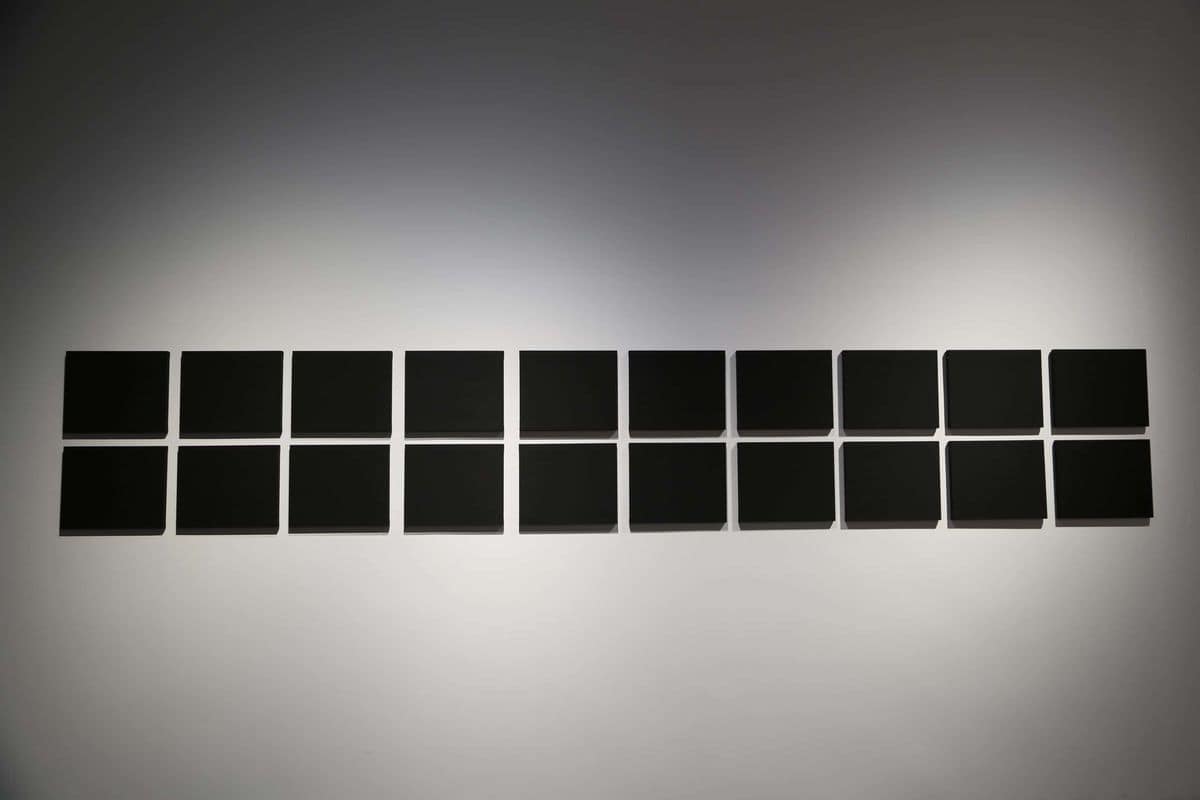 Black belongs to a series of works inspired by the idea of blindness and the extent that it has in our world. Using the Paris Convention for climate Change as a draft paper, I have translated the 20 articles of the declaration in braille, embroidering the text in a black thread on 20 black canvases.
Humankind is blind in front of the violations of virtually protected rights, or it pretends to be, therefore confining them into the realm of inactuality.
But there is also a sort of blindness to which we do willingly succumb to, a comfort zone that allows us to see what we want to see and to ignore anything else which wouldn’t fit in the frame. 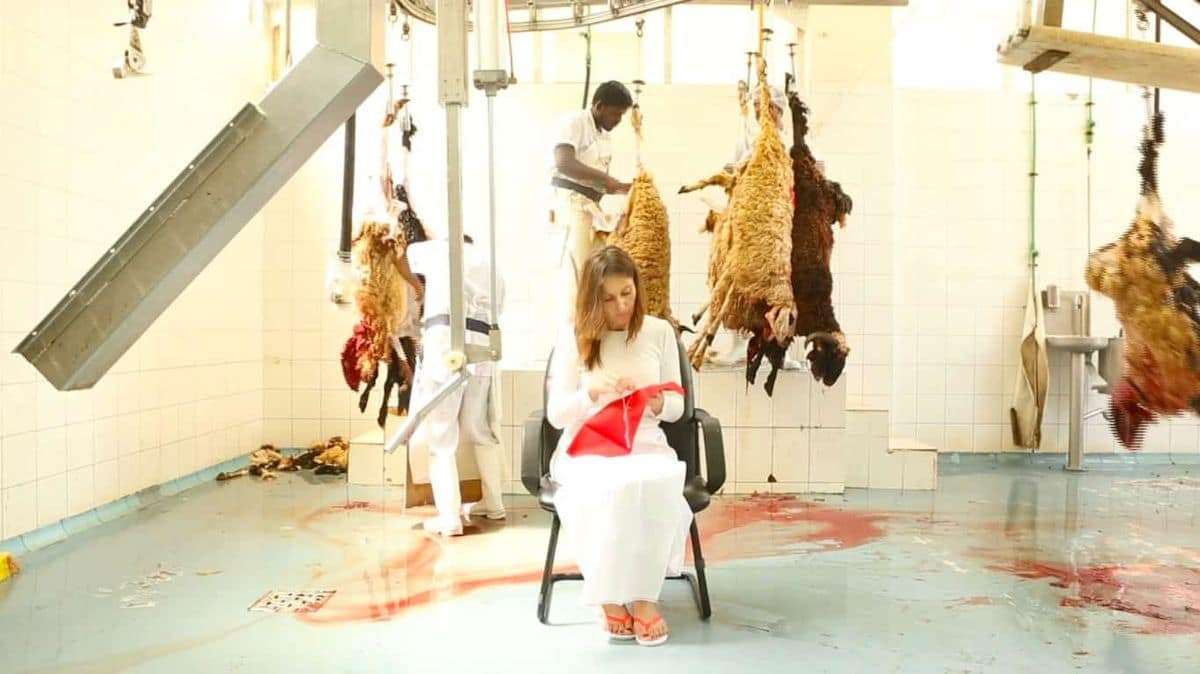 In ancient Greece Pharmakos was the ritualistic sacrifice of a scapegoat, consisting in the expulsion of an individual, the Pharmakos, in order to gain a collective purification. Therefore, the Pharmakos is at once the outcast and the rescuer. Motherhood explores the dichotomy of exclusion/inclusion, sacrifice/salvation, through a juxtaposition of presences: the victim and the executioner, the witness and the mother, to symbolize all possible emotional attachments to all the involved roles

Cristiana de Marchi is an artist and writer who lives and works in Beirut, Lebanon, and Dubai, UAE.
She holds a Master’s degrees in Archaeology from the University of Turin, Italy and in Museum Didactics from the University of Rome. She has taken part in residency programs at the University of the Arts, Philadelphia; Santa Fe Art Institute, USA; Rijksakademie, Amsterdam; and MOCA Yinchuan, China. Her work has been presented at the Yinchuan Biennale, Santa Cruz Biennale, and Singapore Biennale, among others. In 2015, she was awarded the Italian Premio ORA, a leading worldwide art prize. She is a graduate of the Salama bint Hamdan Emerging Artists Fellowship.