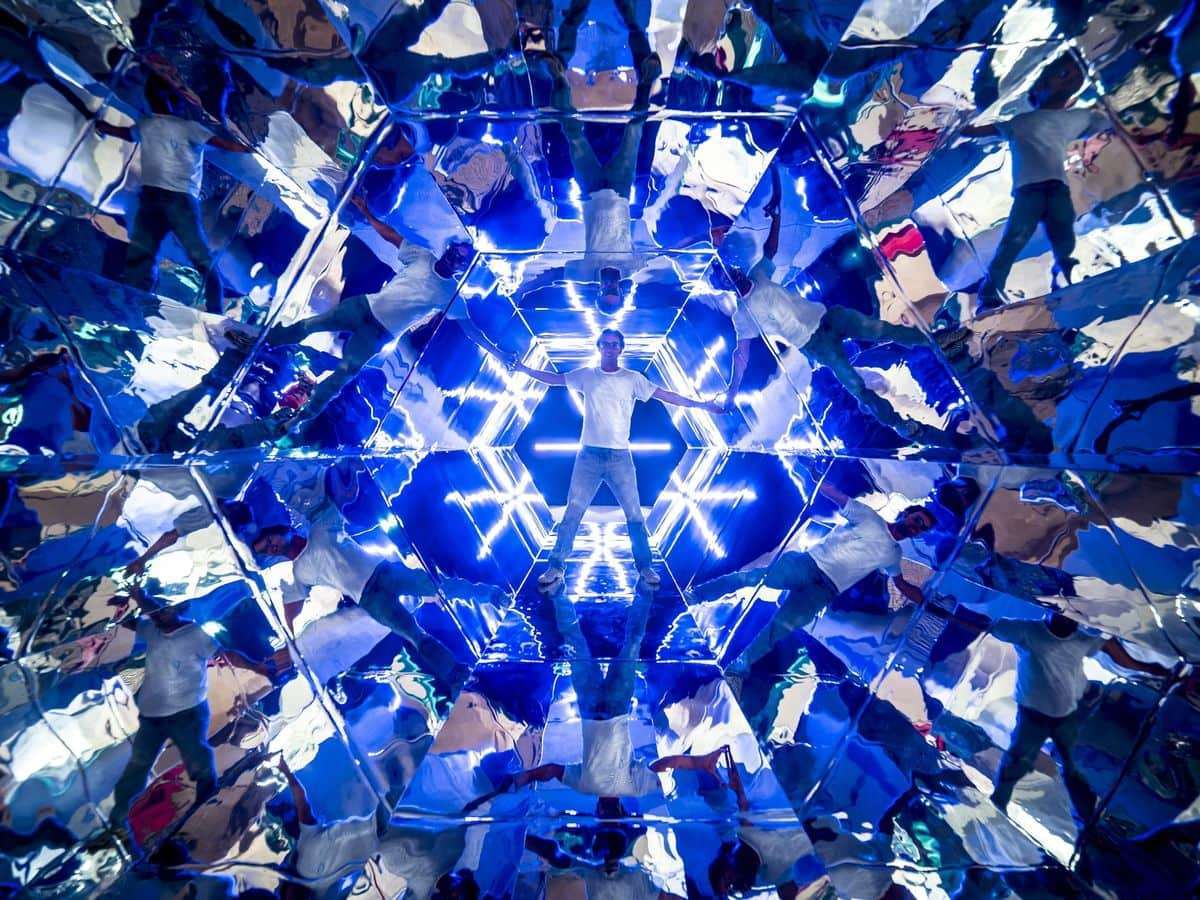 The Kaleidoscope is traditional concept toy. This toy has been played with by generations who have enjoyed its optical effects. A2arquitectos has decided to build this large scale model of the Kaleidoscope so people can interact with it.
The piece consists of a Hexagonal reflective tunnel measuring 6 meters in length and 2 meters in height. The magic is created by reflecting external views, reflections and the people walking inside them, thus creating multiple worlds to explore.
Such elements include light and the visitor who trigger a set of reflective effects. This illusion forms the key aspect of the kaleidoscope; the unusual shapes, repetition of pattern and beautiful colours engender a dream-like world. 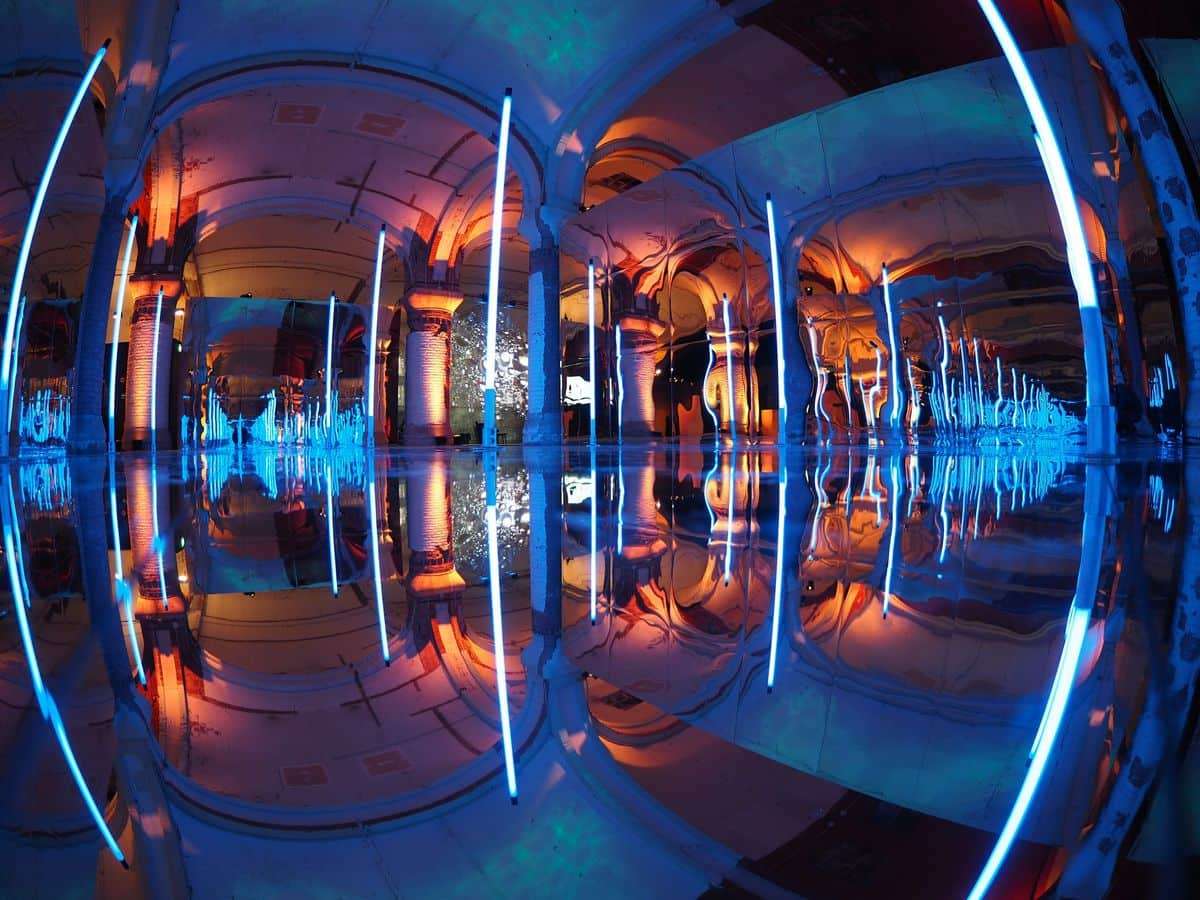 Miralls (from the 10th March to the 5th April 2017). Recinte Modernista de Sant Pau de Barcelona.
“Miralls” is an ephemeral architecture located in the Recinte Modernista de Sant Pau (Barcelona), UNESCO World Heritage Site and Place of Cultural Interest.
“Miralls” presents a multiplied reality of the vaulted space of the Sant Pau Hospital, transforming the space through the interplay of reflections.The installation of a horizontal reflective surface creates the sensation of weightlessness above the vaults, giving a thrilling sensation of floatability. The combination with similarly reflective vertical planes enhances the concept, transforming it into an infinite, levitating space. 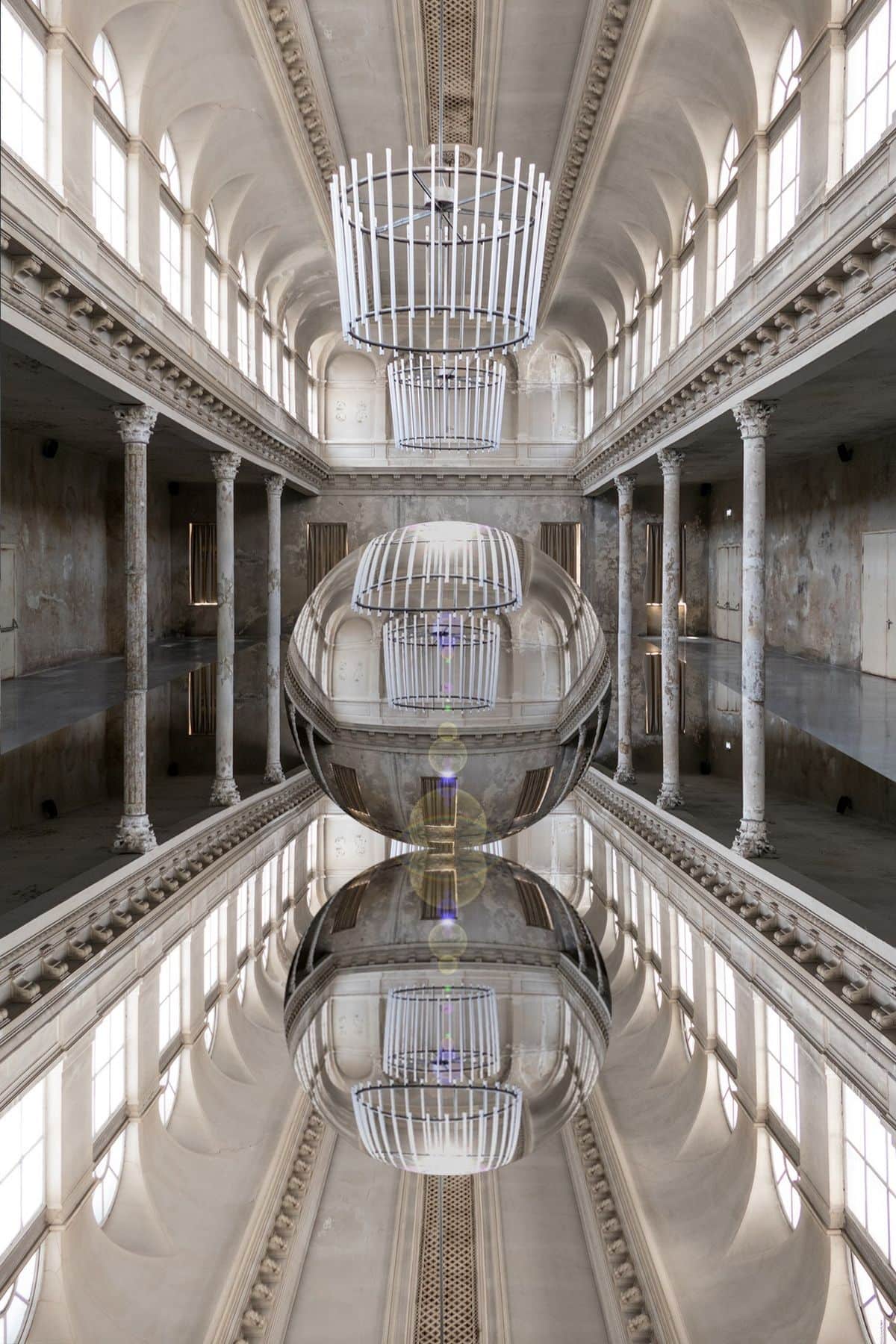 The large rectangular REAKTOR room is composed of tenpillars and has as a remarkable element a huge vault which through the illuminates in the room in a zenithally way.
Through the installation REflecting-REAKTOR we transform the space, presenting duplicity of the vaulted space of the room. Through the placement of a reflective horizontal surface, a feeling of weightlessness over the vault is creating an exciting sensation of buoyancy.
The carpet reflective of 234 m2 produces a duality of the space up-down generating a sensation of weightlessness to the users.
Thanks the light, composition and proportion of the room, through the REflecting-REAKTOR installation, we will incorporate a new symmetry in the room, providing of a superlative character since the dimensions of the pillars are duplicated, producing a disturbing vertical slenderness. The existing horizontal facing disappears transforming the large room with REAKTOR into an illusory space.

A2arquitectos is a Spanish architectural studio established in Majorca and Madrid, focusing its efforts on the creation of unique and innovative design projects.
Under the guidance of architects Juan Manzanares y Cristian Santandreu, it has won numerous national and international awards, placing it at the cutting edge of architecture and interior design, and achieving international renown.
The studio develops projects based on the interplay of light and reflections, modifying spaces and creating multiple, dreamlike worlds within them. Unique spaces that respond to different sensory experiences, playing with forms, colours, reflections, fluorescence and textures. Its acclaimed work has been exhibited at museums including the Palais de Tokyo in Paris.