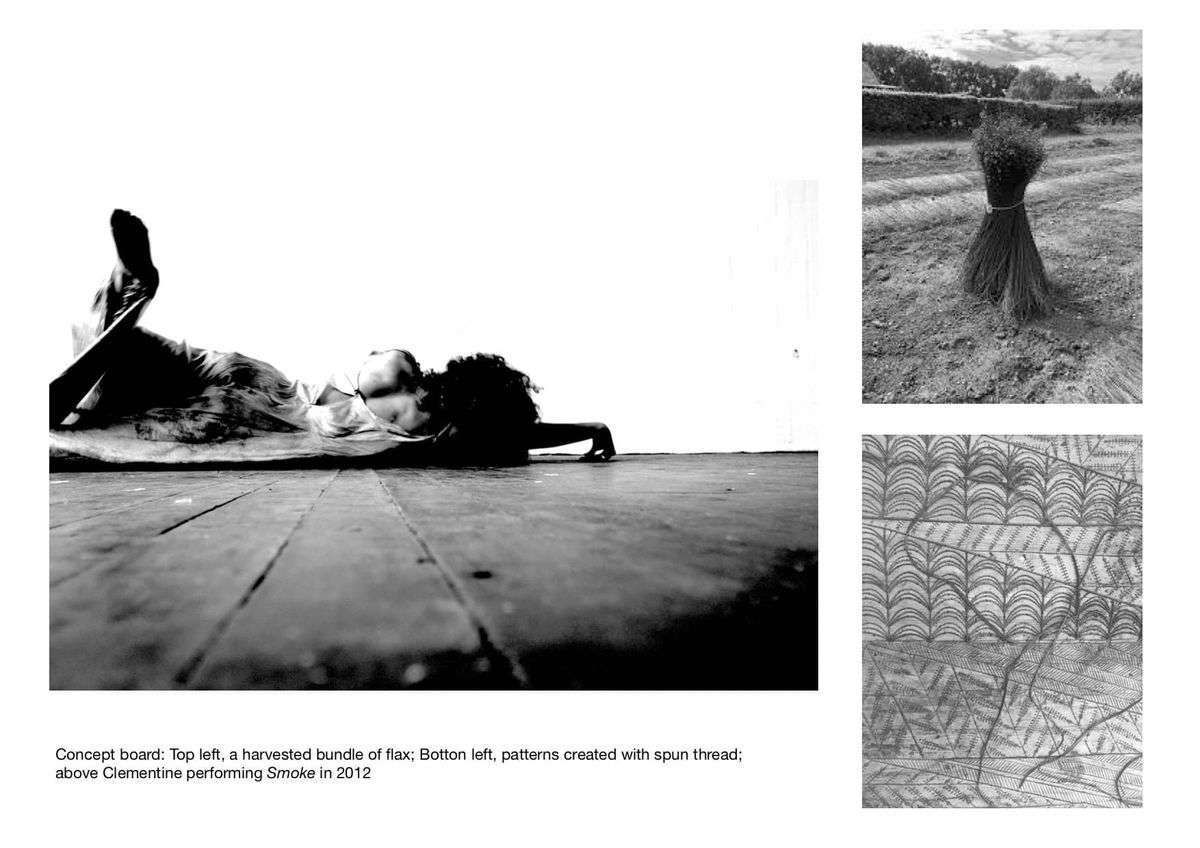 Inspired by the tradition of flax cultivation and linen production this proposal seeks the opportunity to collaborate with this industry in Italy (where the plant continues its narrative today) in the creation of an immersive performance communicating the global voice of an intrepid plant. Following the migratory dance of Linum Usitatissium from its origin in the Fertile Crescent, a ricocheting narrative piece will travel the vast movement of Flax through time: sacred linen carried the ancient Egyptians into the afterlife; enabled conquerers to colonise the elements and distant lands as sails. Linen thread crafted into a wearable crocheted skin will be worn by the artist throughout the performance. Ancient textile techniques of clay, indigo and wax application will be used to detail the structure referencing the many sea and land journeys the plant has undertaken. The narrative threads will be voiced as song and performed musically through interaction with the 'strings' of the garment. 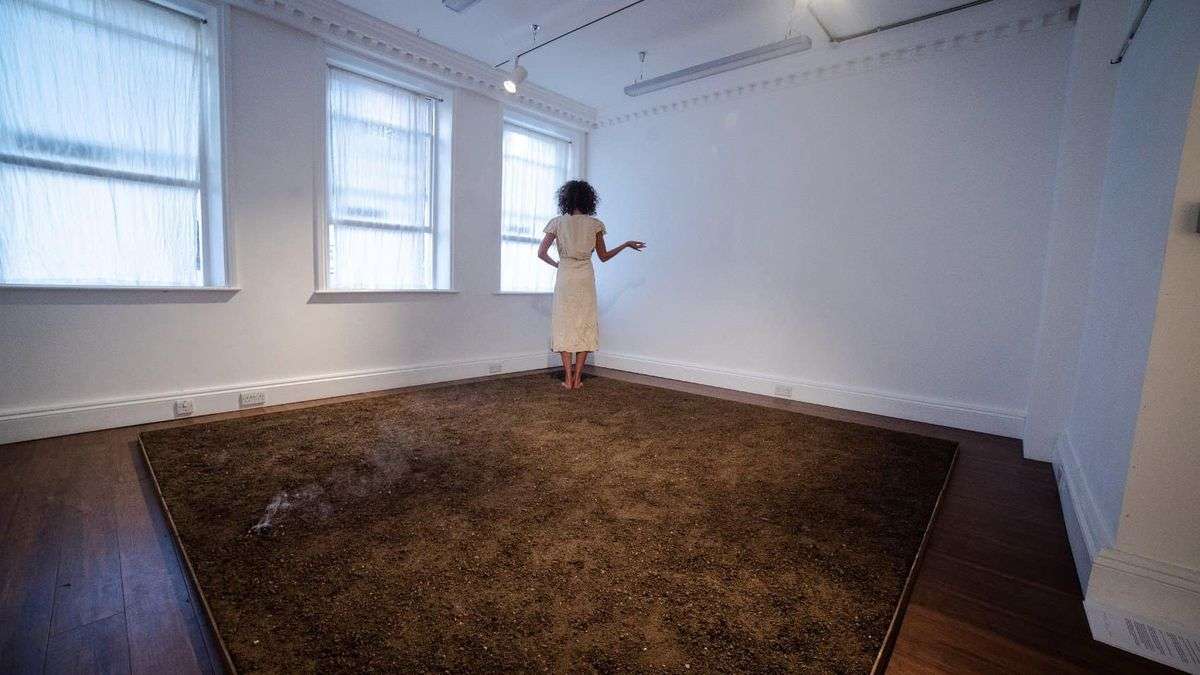 Tracing the vicissitudes of my inner topography in earth in search of our essential nature.

The audience was invited to participate in this ritual mediation via an offering of edible earth and drinkable mud, the words offered to the receiver were 'this is you, this is us'.

Accompanied by an installation of mud, dripping throughout the performance onto a white canvas and the percussion of earth on skin; a voice over invoking the audience to query their own relationship with earthen matter breaks the silence at long intervals and the scent of raw vetiver roots were passed for people to smell. Vetiver roots have a powerful role in cultivation, binding the soil together. A sensual reminder of our interconnected state, made so delicate through the illusions of separateness that pervade our contemporary ways of being. 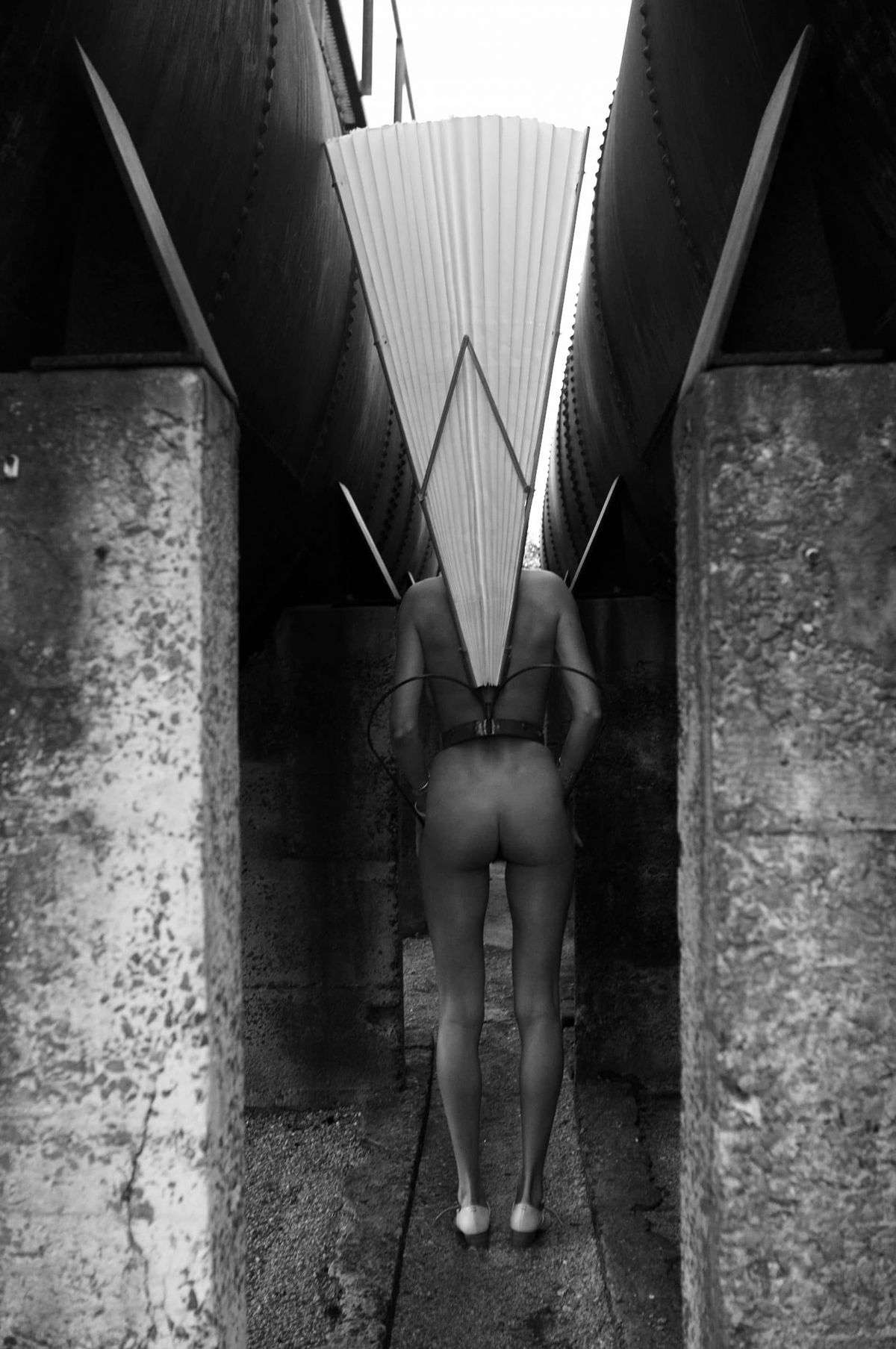 The Paper Swan is a colonial abstraction, a comment on the uncanny and mythical narratives associated with swans. The terminology 'Black Swan Event' used to predict the 'unseen' but 'probable' continues to drive the 'myth' of the 'unknown' and the 'other'. Living in Australia I query the inverse, the many White Swan Events that have taken place in a Black Swan country, the omens of colonisation that have reaped havoc in an ancient indigenous landscape that was a place of reciprocity before the White Swans arrived by sea.

Depicted within an abandoned industrial context within Sydney cove, in a place that was considered to be sacred to the Birrabirragal people, the clinical nakedness of these truths unravel through time as Nature re-claims it's territory, and narratives of the past surface to be heard.

The structure itself is constructed with bamboo; kangaroo leather; recycled saddlery and metal scrap with paper created from recycled old cotton sheets and towels.

Clementine Robertson, b. 1990 is a multidisciplinary artist interweaving performance and ethnobotanical narrative. Constructing her visions in a tactile and playful manner, Robertson’s work is a delicate reminder of our essential nature within a vast and intricate cosmos.

After completing a BA (Hons) at the Edinburgh College of Art, Robertson expanded her comprehension of plant, people and performance interrelationships spending time with Ylongu elders in Northern Australia and collaborating with traditional Ikat weavers in Cambodia. Her focus has enabled her to work as a researcher and creative director for projects that focus on ecology and performance.

Her work has been exhibited at the Godinymayin Xijard River Arts and Culture Centre in Katherine, WA; as part of the Setouchi Triennale, Japan; the Royal Academy, London; by Hermes, Australia and held within the MGC Asian Traditional Textiles Museum in Cambodia. She has performed in London, Australia and the Netherlands.