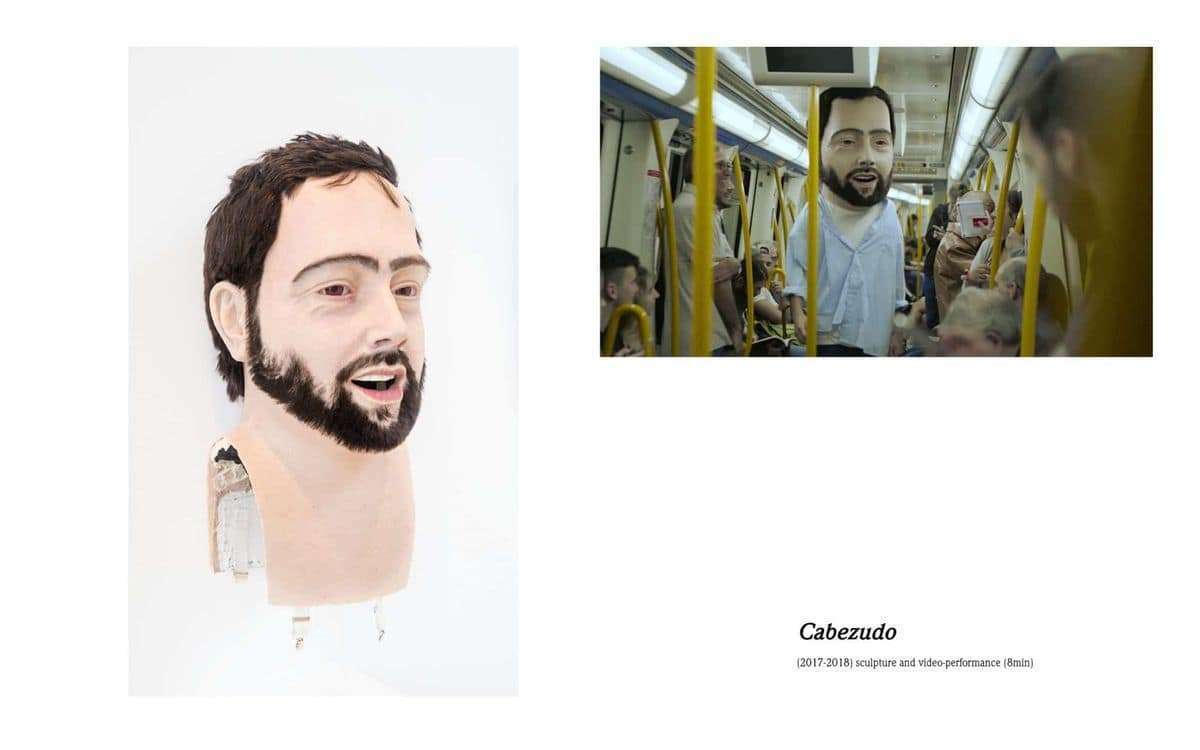 Cabezudo is a projet which was developed during a residency at the Casa de Velazquez (Madrid, ES). The cabezudo is one of the traditional mask of the Spanish carnaval. It is characterized by an oversized head that people carry on their shoulders. These masks used to be portraits of the local « notables ». Once a year people would use it in order to express their inner feelings about other members of the community. In this project, Carat has requested to a Cabezudo Master named Ramon Aumedes from Granollers (Barcelona, ES) to sculpt his portrait. Then this portrait made out of clay has been molded and transported to Madrid to the Abajo Studio (company specialized in cinema special effect). This Studio has produced a positive in silicona from the mold. They have set eyes, hairs, and paint the skin. This work has been made under the expertise of Pedro Rodriguez Abajo. The last step of the project has been to shoot a performative video-clip with the help of the young video makers of the Banditz Studio. Production house based in Madrid (ES) and specialized into music-video. Cabezudo is using a sculpture as a tool to disrupt social interactions. Carat uses here an old fashioned popular element in order to adress contemporary problematic such as identity. As described Boris Groys in « In Public », the perpetual self-staged lifes of the internet social networks enclosed people into their individual mythologies. For Boris Groys this phenomenon derived from the self mythologies that artist were creating of their own identities during the XX century. Carat by using his own image trough this hyperrealist cabezudo underline the paradoxe that stagged identity interfere into daily life. His identity is transformed into a trivial comic object that a performer can use directly in the public space. His oversized head becomes an object of attraction and repulsion, an object that people instagram or run away from. An object that transform is immediate surrounding into an audience. An object which make visible a certain form of loneliness trough this distance between object and viewer. Cabezudo team: Direction: Clément Carat Master Cabezudo: Ramon Aumedes Production mold, traditional cabezudo: Taller Saradanca, Aumedes family Production Silicone and mimetic materials: Studio Abajo, Pedro Rodriguez Abajo Video/editing: Clément Carat Camera: David Heof, Alberto de Miguel Performer: Daniel Pompa Clothes: Aurélien Lepetit Project supported by the Casa de Velazquez, French Academy in Madrid. In residency in Milano (It) at the Wandering School during the Salone del Mobile, Carat has decided to produce an installation using bicycle and the expertise of bicycle makers in Milano. This project was motivated by a question: How to make focus an audience on the sensations of a movement and so on apprieciate biking not as a transportation system but as a mechanical experience. This installation is composed of two bikes link by a tube of 5 meters which is itself connected to a “rotor-pillar” The bike is not anymore an object made to go from a point A to a point B, but an object which can provoke a perpetual movement that the audience can take time to experience. To make work Track Bikes a crucial point is that the users have to pedal with the same intensity. If they do not coordinate their movements, the installation might not work smoothly. The vehicule is not here a technology which isolated and encapsulate the driver. Here to move means to get linked with another person. Carat in order to produce this project has looked for help and collaborations in Milano bike mechanic network. He met trough this research: Rocco Guarna, one of the most ingenious italian bike mechanic, president of the B+C associazone. . This video/performance was produced during a residency organized by the Télétérités Gallery (Budapest,Hungary) in the factory district of Csepel (municipality of Budapest). My work was linked with the hungarian term Fusi which meant during the communist period: «to steal time from the factory in order to produce your own goods, or as a self-expression time. » So in order to experiment this concept, I organized a race with two forklift drivers of a factory of the Csepel district. I propose them this challenge in order to see who was the best driver between the two of them. However behind this challenge, the important point of this performance is that the race happened during their working day, so they were actually paid by their factory during the racing time. They were really performing a Fusi moment, that I choregraphed. By making it into a game, I wanted to enhance the function of the game as a way to contest a system, an institution, or in this case a working day at the factory. The game is here a strategy in order to redefine norms and rules.

Clément Carat (Paris,1991) After a bachelor degree of Fine Art in Rennes (France), Carat continues his study at the Sandberg Instituut (Amsterdam, NL), where he successfully graduate of a Master of Fine Art in 2016. The quality of his work has been quickly notice by different institutions as the WOW air residency program in Amsterdam. And more particularly, he has been selected to be part of the Casa de Velazquez (Madrid, ES), which is one of the three prestigious French Academy art residency (with the Villa de Medicis, Roma, IT and Villa Kujoyama, Kyoto, JP). He is actually preparing a show curated by Cécile Debray. In his work, Carat unset and unbuillt his surrounding environment as a mechanic or a « bricoleur »*. His purpose is to look for internal structures and essential process. C